With thanks to Morna O’May. 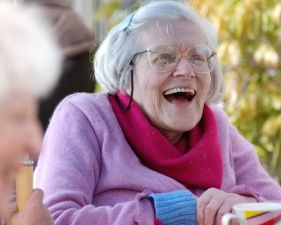 Contact the Elderly, the charity solely dedicated to tackling loneliness and isolation among older people, is delighted to announce the launch of a new friendship group in Aberdeen.

The charity, which aims to relieve the acute loneliness and isolation of people over the age of 75, organises monthly Sunday tea parties for small groups and volunteers within their local community.

Each older person is collected from their home by a volunteer driver and taken to a volunteer host’s home for the afternoon.  The group is warmly welcomed by a different host each month, but the drivers remain the same, that means that over the months and years, acquaintances turn into friends and loneliness is replaced by companionship.

The older members of the new Aberdeen group enjoyed their first tea party at new volunteer host Esther Milne’s home in Aberdeen on Sunday 27th March and volunteer group co-coordinator John Gall, hailed the outing to be a great success:

“The launch of this new group is not just a success – it is an amazingly wonderful success!  I’m just not sure who got more out of it – the older guests or us volunteers!”

New research released earlier this year has highlighted the link between loneliness and ill health in later life, including depression, certain heart conditions and even Alzheimer’s disease.  Contact the Elderly remains steadfast in its belief that its monthly Sunday tea parties, which offer a regular and vital friendship link every month, exist as one of the most effective preventative measures of tackling this growing issue.

“The new research out this month highlights just how damaging and depressing being lonely in later life can be, but happily the new tea party group in Aberdeen can go some way towards tackling this issue locally and on a practical level.

“Anyone interested in either volunteering for, or joining this new group, or one of the other 18 Contact the Elderly groups across the East of Scotland, please do get in touch with me.”

Aberdeen residents interested in volunteering for Contact the Elderly, or people over the age of 75 who would like to find out more about joining one of the charity’s local tea party groups, can contact Morna on  01786 871264 or email morna.omay@contact-the-elderly.org.uk

Footnote:
Contact the Elderly is a national charity, founded in 1965, which aims to relieve the acute loneliness and isolation of very elderly people throughout Britain who live alone, without family, friends or other support networks nearby.

The Contact the Elderly model is based on a simple yet very effective concept – that of monthly tea parties for small groups of older people and other volunteers within their community – which brings people of all ages together, develops fulfilling friendships and support networks, and gives everyone something to look forward to.