It was back to league business today as Glasgow club, The Rangers, travelled north for their first game in the Granite City. By Red Fin Hall. 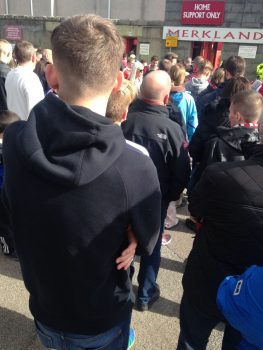 The one o’clock kick off didn’t stop a sell out, with queues forming early. There was a high police presence and a media encouraged frenzy of panic.

This exaggerated situation compounded itself when everybody was searched before being allowed through the turnstiles.

When I say everybody I mean everybody. OAP’s, kids, people with learning difficulties.

Referee John Beaton started the game on a sunny day where everything was pitch perfect, including the fans as they sang along to The Northern Lights.

The Rangers earned their first corner with just two minutes gone, which keeper Joe Lewis dealt with very comfortably. Aberdeen got their first a moment later.

The home team were allowing the visitors too much possession culminating in an incident between Anthony O’Connor and Joe Garner in the eleventh minute.

As anticipated, the home fans started the minutes applause in a humorous celebration of the demise in 2012 of the company formerly known as Glasgow Rangers FC. The authorities expected this to be a flashpoint, but obviously, it passed without incident. Apart from an attacking run forward by Peter Pawlett, which ran out of steam.

The Rangers were knocking the ball about better and in 17 minutes they headed over Lewis’ goal. Pawlett then won a free kick, but it too came to nothing. The game followed a similar pattern to Thursday’s cup quarter final, with the Dons not anticipating where their teammates were putting the ball.

The first booking came in in 21 minutes when the aforementioned number 7, Garner was the recipient. The Glasgow team were awarded another free kick, this time just in front of the Aberdeen goal at the Richard Donald Stand, but Lewis wasn’t troubled by it, although a moment later he made a top class save which he deflected on to the crossbar.

The home fans were getting restless, the referee didn’t help as he kept stopping the game for seemingly nothing. And Aberdeen carried on not using the wings enough, not closing down and not utilising the spaces. The first real shot from Aberdeen was on 30 minutes when Kenny McLean was tipped over the bar.
The players were arguing with each other as passes kept going awry.

Next, a neat ball was played in from the wing by Graeme Shinnie, but neither Adam Rooney nor Pawlett got to it.

As the first half was drawing to a close, Hayes was tackled from behind by Halliday, but mysteriously the referee gave the decision the other way. The first half finished when Niall McGinn played a ball in which was easily held by the keeper.

How would the second half fare? Would the Dons keep making a poor opposition look good, or would they step up to the plate and give the capacity crowd something to rouse them from their slumbers?

As the players returned to the pitch, Maddison replaced Pawlett, who had put in a good shift.

From the restart the Dons were upfield, but then the ball came back to Lewis who cleared it forward; Rooney headed it on to Hayes who raced onwards and shot the ball into the net past Wes Foderingham.

A minute later there was a second booking for The Rangers after a cynical foul on Hayes, and from the resultant free kick, 19 year old Maddison
shot just past the goal.

The second half was livening up, with Reynolds the next to be booked, then Lee Wallace for the visitors shooting well over the bar, and then Maddison doing the same at the other end.

The Dons’ defence looked strong dealing with everything that The Rangers tried, although if truth be told, it wasn’t that much.

The ref continued his erratic performance by booking O’Connor in the 64th minute and then not booking Halliday when Hayes was chopped down yet again.
Aberdeen were showing a lot more positivity, but still allowing The Rangers too much space in midfield. Shay Logan was fouled close to the corner flag, and the free kick, taken again by young Maddison, was cleared for a corner. Another poor set piece.

More substitutions followed with Wes Burns coming on for McGinn. Kenny Miller also came on for the visitors.

On the latter’s first foray forward, his pass to Lee Wallace saw Jonny Hayes caught out of position and bringing down The Rangers number 5 to give away a penalty. Andy Halliday scored from the spot kick.

The action continued with McLean being booked and Burns being brought down in the Glasgow Team’s penalty box, but Beaton waved played on.

In the 90th minute Hayes was brought down, yet again, this time by Andy Tavernier. This time the young player on loan from Norwich City made no mistake when taking the free kick as he powered the ball well past Wes Foderingham and into the net to claim victory for Aberdeen.

Taylor was then brought on to bolster the defence moments before the final whistle was blown leaving the home fans deliriously happy. Although the game and atmosphere wasn’t the blood and thunder affair as most had anticipated, the victory meant the end of a tough run for Aberdeen.

3 games, 3 victories, two of which came in 90 minutes, resulting in the end of a great week for Aberdeen, who have now climbed back up to second place in the league.

Footnote: A special extended print edition of The Red Final, brought out for today’s game, was all but sold out by the sellers around the ground.