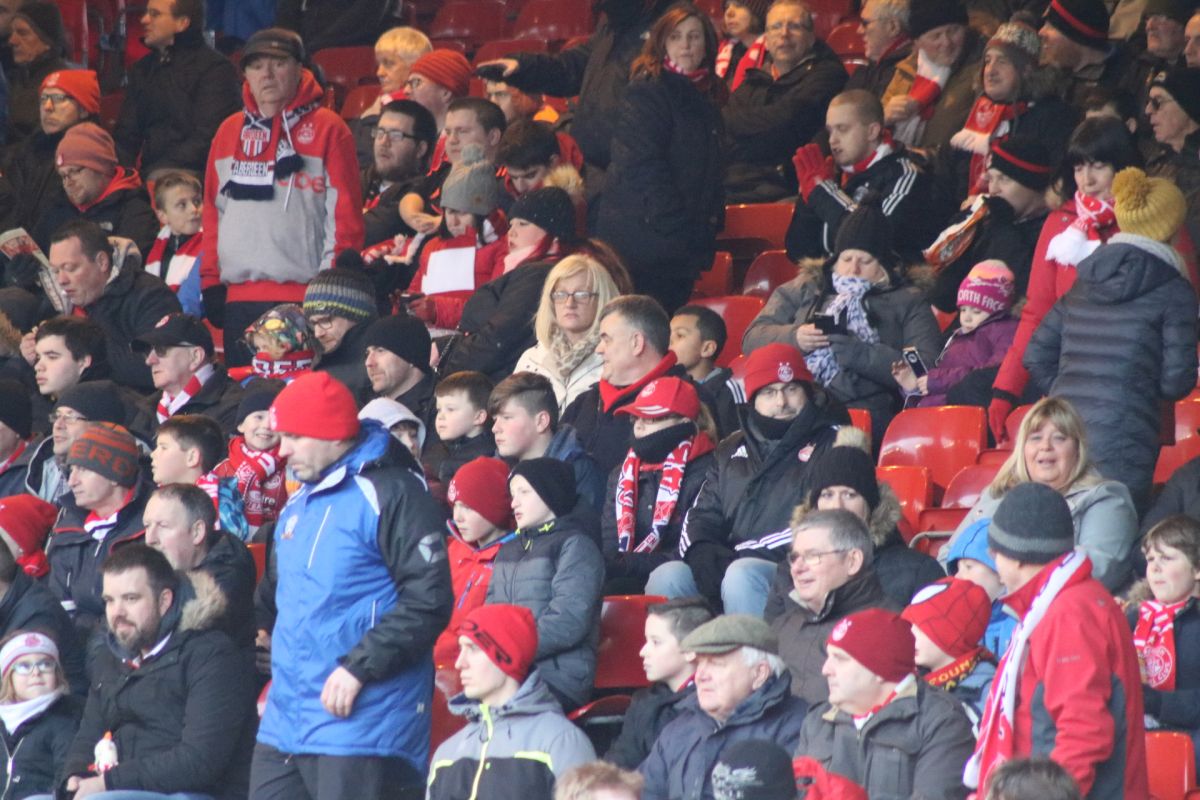 It seems like ages since a ball has been kicked in anger by AFC.

It was a welcome return to Pittodrie for the continuation of the football season, with lower league Stranraer the opposition for only the 5th time in both teams’ long history.

The Dons fielded their preferred and strongest line up, with James Maddison having returned to his parent club, Norwich, and intended loan signing, Stevie May, not yet in situ.

From the kick off, Niall McGinn went up field and had his first shot towards the visitor’s goal. Aberdeen were awarded their first corner, created by Adam Rooney, but Andrew Considine’s strong header went over the crossbar.
Five minutes into the game, number 33 for the visitors, Willie Gibson had a shot, if one can call it that, easily held by Joe Lewis.

In the 7th minute, a pass by captain Ryan Jack over to the left found Jonny Hayes, who in turn passed to McGinn, whose shot was well saved keeper. Two minutes later the same man had a weak shot from 30 yards out.

Ash Taylor, comfortable in the centre of defence since regaining his place from Anthony O’Connor, executed a perfect long pass down the right finding McGinn. His poor touch fell to Hayes, who continued the move, finding Considine who had found his way forward from left back. The move ended there though. The Dons needed to settle down and show their obvious superiority.

The two players under the speculation of transfer rumours, McGinn and Hayes, were on their best form and causing problems everyone they were on the ball. The latter, looking to be worth much more than the derisory 1/2 million pounds Cardiff offered for him, laying on another chance for the former, but Kenny Mclean was a bit too keen and sort of got in the way preventing him being able to pull off a clean shot.

Just after that McGinn audaciously tried to chip the keeper from 50 yards out. But Belford was able to get underneath the ball and hold it.

Twenty one minutes in saw Hayes fouled, but referee Don Robertson played advantage. Hayes found Shay Logan, who put the ball into the goal area, but neither Rooney nor any other player in red, was able to find the net for the opening goal.

Kenny McLean was the next to have a shot, but it was stopped by the keeper. McGinn was the provider this time, as he executed a great pass to Logan; he beat the offside trap but defender, Liam Dick, got his foot in to prevent the opener.

Stranraer were awarded a free kick on 28 minutes, when Graeme Shinnie brought down Willie Gibson, who took the free kick himself. It came to naught and the ball fell to the ever willing Hayes who broke upfield, put a perfect ball in for Adam Rooney to get on the end of and fire into the net to claim that much anticipated first goal for the Dons.

This brought his total for the club to 69, making him the top scorer for Aberdeen this century. One more that Darren Mackie: but over a shorter period.

The Dons were intent on keeping the pressure up, with Considine having too chances within a minute of each other. Both just off target. In the 34th minute, the lead was extended when McGinn picked up the ball just inside the opposition’s half, and he had only one thought in mind as he ran up the left side if the pitch.

He made short change of the two defenders in his way, and with the keeper closing in, hammered the ball past him and into the goal.

If anyone thought they were going to sit on their laurels until halftime, they were mistaken as Hayes was the next to have a shot, but his effort went straight across the front of the goalmouth.

With only ten minutes left in the action-packed first half, Aberdeen were awarded a free kick which came to nothing.  Moments later though, Mark Reynolds found Rooney with a superb ball from just outside the box. The ball was heading into the bottom left corner, but the on form keeper for the away team deftly turned it out for a corner.

Hayes had another chance just before half time, but he totally skyed it

No changes were made by either side at the start often the second half, and three minutes into the half, Shinnie had a shot that the keeper couldn’t hold, but managed to keep it out anyway.

The third goal wasn’t long in coming. During a scramble in the visitors’ box, the referee spotted a deliberate hand ball by Morgyn Neill and pointed to the spot. Needless to say, Rooney stepped up, and despite the keeper guessing the right way, the Irish striker made no mistake and scored his 2nd and Aberdeen’s 3rd of the game.

Both Hayes and Shinnie showed next that they weren’t shot shy, but Belford was having a good game. He also denied Logan a goal.

Five minutes later, McGinn got his second goal to make the score much a more plausible 4-0. This came as the result of team work with Considine, Shinnie, who did well to hold off Gibson, and Ryan Jack, before McGinn joined Rooney in being the first two players to score goals in four competitions in one season since 93/94.

On the 61 minute mark, McGinn fired in another attempt from the left side at an angle, but only managed to win yet another corner. A few minutes after that Aberdeen made their first change of the day with Hayes departing the field and Peter Pawlett replacing him.

At the same time, managerless Stranraer took Mark McGuigan off and put on David Wilson.

The visitors must take credit for not sitting back and playing a defensive game. Their substitutes had the desired effect of tightening up their midfield, whereas Pawlett seemed to take a wee bit longer to settle. The men from the borders made their final substitution soon after with Guiliano Morena coming on and Ryan Thomson going off.

The Dons meanwhile replaced Considine with youngster, Scott Wright. The effect of this was noticeable as Wright showed his keenness and pace by taking the ball swiftly and fearlessly towards the opposition goal.

Rooney was trying hard to get his hat trick, and he was very unlucky not to get it, when, the ball just refused to cross the line.

Another of Aberdeen’s youth players, a Frank Ross, came on to replace McKean in the midfield. Here was another young man showing that this big occasion held no fear for him.

There wasn’t over much time for him to do anything as the referee blew the whistle for full time with no stoppage time added.

All in all a thoroughly professional performance by the lads. Hopefully the same thing can be done on Friday evening when Dundee, albeit a tougher proposition make the trip north.