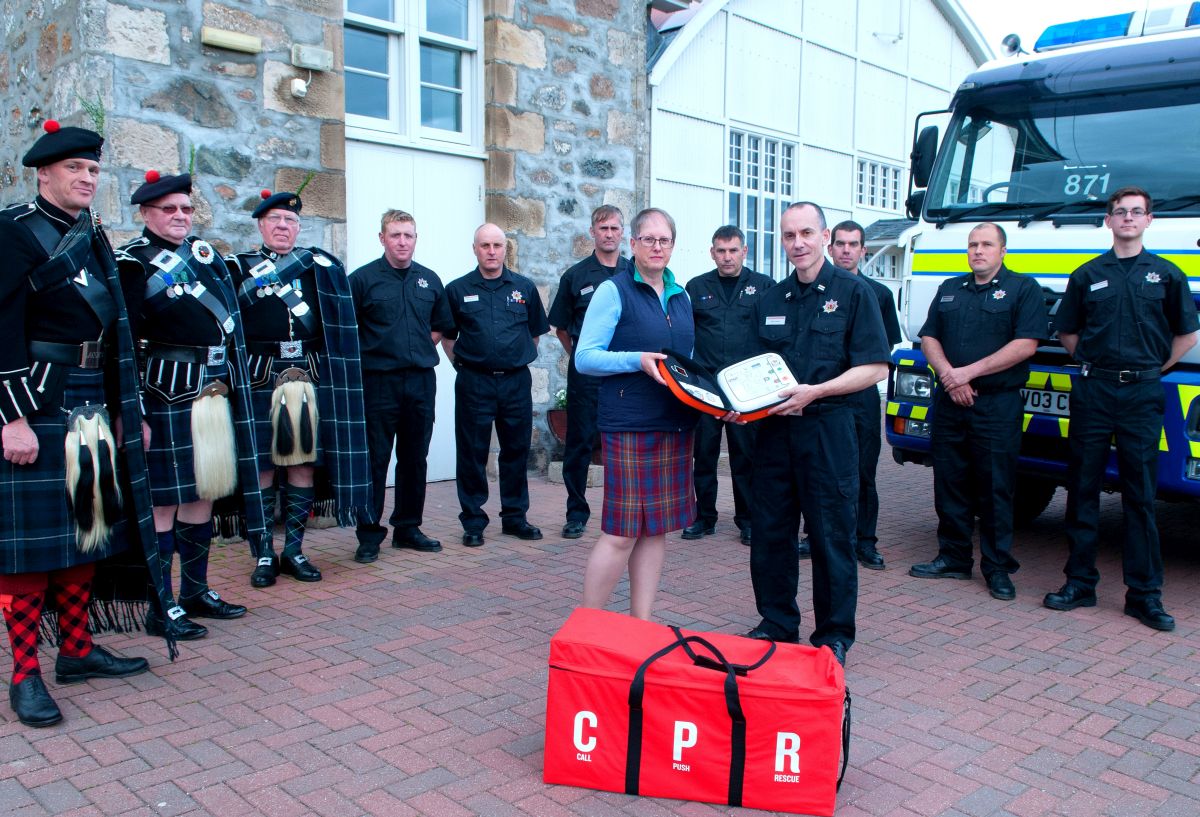 Jennifer Stewart  with Paul Hicks of Scottish Fire and Rescue Service, and members of the Lonach Highlanders and local firefighters.

The organisers of the annual Lonach Highland Gathering and Games, the Lonach Highland and Friendly Society, have launched a fundraising campaign to install lifesaving equipment in upper Strathdon.

The society has launched an appeal to raise nearly £7,000 to fund the purchase of four public access defibrillators that will be installed at venues in the Aberdeenshire valley.

It follows the installation of a defibrillator, funded by the Lonach Highland and Friendly Society, at the Lonach Hall.

Defibrillators give someone suffering a cardiac arrest more time while ambulances get to a patient’s location. It is estimated that every minute without CPR and defibrillation reduces a person’s chance of survival by 10 per cent. In remote, rural locations such as Strathdon, where the nearest major hospital is over 40 miles away in Aberdeen, access to defibrillation could prove vital.

Retained firefighters from the Scottish Fire and Rescue Service’s Strathdon fire station, which is made up mainly of Lonach Highland and Friendly Society members, were on hand at the unveiling of the Lonach Hall defibrillator.

The Strathdon fire station, like Scotland’s other 355 fire stations, acts as a base for local people to learn vital CPR skills that can potentially save someone’s life. The training is provided in partnership with British Heart Foundation Scotland, which has donated Call Push Rescue training kits to the stations. Anyone interested in this free CPR training should contact their local fire station.

To provide the rural community with the potentially lifesaving defibrillators, the Lonach Highland and Friendly Society is seeking support from local businesses, organisations and local benefactors to help fund the purchase. The four bright green ‘shock boxes’ will be placed in prominent public locations throughout the rural Aberdeenshire community.

Public access defibrillators are designed for anyone to use on someone in cardiac arrest. The devices talk users through the steps required, including CPR and patient analysis, and will only deliver a shock to the patient if it detects that one is required. This means that there is no chance of malicious or accidental usage.

The sites earmarked to host one of the devices are Glenbuchat Hall, Corgarff Hall and locations in Glenkindie and Kildrummy.

Lonach Hall was chosen to host Strathdon’s first defibrillator due to its role as an important community facility. The well-used venue has been a fixture of the Bellabeg area since 1845 and hosts a range of functions, including weddings, concerts, meetings, dances and corporate events. It is also the venue for the annual Lonach Highland Ball which is organised by the society and is held the week following the annual Lonach Highland Gathering.

“The society was founded to preserve highland culture and promote community cohesion and charitable giving, all of which still run through its core today. Supporting the local community is imperative to the society and our annual gathering continues to make a significant contribution to the local economy. We always strive to increase the scope of that contribution and this fundraising initiative is part of that.

“Strathdon is a beautiful, rural location, but one that can take some time for emergency services to get to. Defibrillators can prove crucial to increasing the chances of a patient’s survival in the minutes before an ambulance arrives. With a predominately older population, installing these pieces of lifesaving kit in the local area makes a lot of sense, particularly as no such provision currently exists.

“Applications for grant funding have been made, but any contribution from businesses, organisations or individuals would be warmly received. Our aim is to raise enough funding to have the additional four defibrillators installed by the end of 2016.”