Aberdeen’s most fashionable event is coming back to make a reappearance in the great, Granite City. With thanks to Emma Noble. 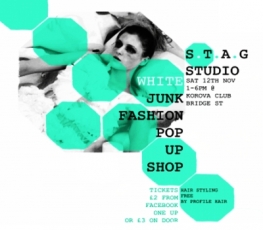 S.T.A.G Studio is holding Aberdeen’s return of the Pop-Up fashion and styling event on Saturday 12th November at Korova Klub from 1pm-6pm.

The aim is to promote independent fashion designers throughout Aberdeen and connect the fabulous design talent on offer here in the city and throughout the shire.

Two fourth year fashion design students at Gray’s School of Art, Emma Noble and Toni Roddie, have set up and established S.T.A.G Studio. The company name stands for Scottish Talent and Graduates. It is a unique group dedicated to helping promote the people in Scottish fashion, whether newbies to the industry or newly graduated or established designers.

S.T.A.G Studio aims to feed the fashion industry within Aberdeen and help promote the Scottish fashion industry as a whole. They offer designers the opportunity to connect and network with like-minded folk within the city and to help build collaborations through fashion shows, photo shoots and unique fashion events.

At the Pop Up Shop the S.T.A.G. duo want to showcase new and up-and-coming fashion designers from the local community, along with vintage boutiques and jewellery designers. Delicious cupcakes are on offer from Hannah Bakes Cakes; giftware from Alison Bell; and nail and body artistry is available as part of the fashion exhibition. Plus you may even be style hunted by the in-house fashion photographer, then featured on the blog!

Once you have browsed and bought, you can sit back and have a tipple or two and perhaps even try the S.T.A.G. Cocktail, as the DJ fills the venue with music. You can even get your hair styled for free by Profile Hair of Aberdeen.

Planning Blight: Concerns have been raised about how long the present uncertainty concerning Business Rates and the anticipated chaos attendant on major construction projects will have on business activity in the vicinity of Union Terrace Gardens. Even the relatively small-scale resurfacing work around the Green has seriously disrupted trade & commerce there.

Princes Street in Edinburgh, for example, has been devastated by their Tramways project. The usual effect of ‘planning blight’ is that existing businesses and householders decide to sell up and leave whilst their properties retain some market value, while others who had been thinking of moving in to the affected area – setting up shop, investing in leaseholds etc. – decide not to.

The locality goes downhill as existing proprietors and residents move out and are not replaced by incomers and new entrants. The normal turnover in a healthy property market slows down and grinds to a halt. Property values fall; properties may become effectively unsellable at any price. Basic maintenance, repairs & renewals are neglected as properties come to be regarded by their owners as expensive liabilities rather than as profitable assets worth investing in. The whole area goes into a downward spiral, even if the development proposal never comes to anything. 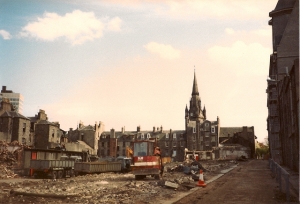 Chaos, Destruction: In her book Lost Aberdeen (2004), Diane Morgan describes the hitherto-vibrant & successful St Nicholas Street/George Street shopping thoroughfare as being reduced to the condition of the Somme battlefield of WW1 for years on end during the 1980s comprehensive redevelopment by a public/private-sector partnership (sounds familiar) between Aberdeen City Council and the developer Bredero.

At that time ACC was in the dubious and compromised position of being both co-developer and the planning authority. All this destruction and the loss of many famous locally-owned stores, for the sake of a pair of undistinguished shopping malls and the questionable amenity of the top deck of the St Nicholas Centre. And George Street has never recovered. Now Fortuna’s Wheel has turned full circle and ACC are about to do it all over again!

The Post Office fronting on to Upperkirkgate has been empty for years. This is pretty much what the proposed City Square on the Gardens could be like, albeit on a much bigger scale.

We checked out the top deck of the St Nicholas Centre recently, on a warm, sunny weekday afternoon. It is exposed to the elements, isolated and cut-off from the mainstream of activity, cluttered with ventilator shafts and was mainly frequented by various unfortunates swigging cider surrounded by empty retail units. Only W H Smith is still in business. The Post Office fronting on to Upperkirkgate has been empty for years. This is pretty much what the proposed City Square on the Gardens could be like, albeit on a much bigger scale.

Bridge Street: Amusing news stories on 30th July 2010 about naked cavortings up on a roof; but there is a wider significance. Bridge Street is a major city-centre thoroughfare, linking Union Street with Guild Street; but the upper floors of the huge granite building in question would seem to be empty, whilst even the ground-floor shop premises, formerly occupied by Jessop’s, are described as being not only empty but in a derelict condition, and a second-floor roof recently collapsed under the weight of a teenage girl.

Much of our city centre is like this – magnificent but largely empty granite buildings, e.g., the Victoria Buildings of 1881 which dominates the westward view along Guild Street, where even the ground-floor premises are either boarded up or in very poor condition. Why is ACC seemingly hell-bent on throwing away public money on a largely unwanted City Square when the basic fabric of our city centre is falling apart all around us? 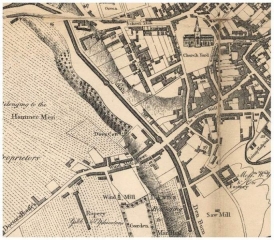 Saturday 14th August 2010: Sunny and warm. Union Terrace Gardens looking beautiful. Flowering plants like fuchsia and begonias last much longer than in more exposed, windswept and sun-scorched locations. Lots of people, and all the trees appear in vigorous health, contra ACSEF. Up on to Union Street, then Justice Mill Lane.

Decided to walk back along the old road into Aberdeen from the south, via the Hardgate, Windmill Brae and through the Green.

Huge granite buildings loom above the lower reaches of Windmill Brae, e.g., the Royal Hotel on Bath Street, resembling an immense French chateau – also the impressive Venetian Gothic façade of the former Palace Theatre (1898) on Bridge Place. The main thoroughfare of Bridge Street itself was laid down in 1865-7, swooping over the old route in from the south to link Union Street with Aberdeen Joint Station, Guild Street and the Harbour area.

Bridge Street also links with Bridge Place, which stands on a ridge extending from Holburn Street to Crown Terrace. The ridge slopes steeply down to the Harbour, forming a natural amphitheatre, used in medieval times for the staging of various events. Along this ridge were fought the battles of the Craibstane, the Langstane and the Justice Mills.

So this is a topographically and historically complex area. As elsewhere in Aberdeen, the Victorian streetscape of Bridge Street, Bridge Place and Bath Street was superimposed or built on top of the alleys and wynds of the medieval burgh. Windmill Brae effectively goes underground, passing below Bridge Street and terminating at the TrinityCentre car park. 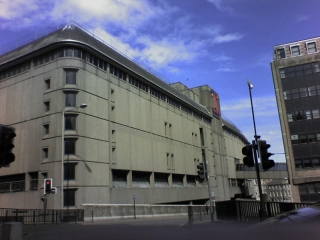 So I turn right and walk along an alley and up some steps and emerge facing the magnificent but ruinous frontage of Ellis & Wilson’s Victoria Buildings of 1881. It is seriously difficult – I take my life in my hands – getting past the entrance to the TrinityCentre car park and the junction with the Denburn By-Pass on the urban motorway of Wapping Street. Thence along Rennie’s Wynd to the Green for a much-needed cup of coffee at Café 52 with Dorothy Bothwell. People walked this route (more-or-less) into Aberdeen for some 600 years before Union Street was built. Now it’s hardly worth trying.

Why should we have to scuttle about underground, in the dark, like half-blind rats in a sewer?

However, in effect, I walked around three sides of the huge TrinityCentre; west, south & east. The trouble is, once you’re on the Wapping Street motorway, there’s no obvious way out! We wonder how much of an older Aberdeen was wrecked to create this urban nightmare – truly the road to nowhere. 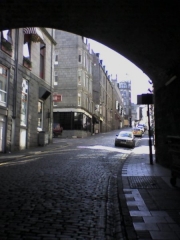 But we are told that one can walk directly from the foot of Windmill Brae through the lower level of the TrinityCentre car park. A pedestrian walkway follows the path across the one-time Bow Brig and emerges on to the Green. Ho-hum. I must admit I have never set foot in the Trinity Shopping Centre, nor its multi-storey car park. I don’t think we should have to, either, to get around our own town. The car park is described as “dark and dingy (aren’t they all?) especially at the Green end”. These places give me the horrors, even on a bright sunny day – urban-nightmare-in-daytime territory. Why should we have to scuttle about underground, in the dark, like half-blind rats in a sewer?

About the only positive here is the return of the place-name ‘Trinity’. When the former Trinity Shopping Centre was bought over by the group calling itself simply ‘The Mall’ in 2006, they rebranded the place as ‘The Mall, Aberdeen’, resulting in predictable confusion with all the other shopping malls in Aberdeen. They had in the process thrown away the medieval place-name ‘Trinity’, which goes back some 800 years on this site to the Trinitarian or ‘Red’ Friars, to whom William the Lion (reigned 1165-1214) is said to have granted his palace on the Green for use as a monastery.

The Mall group sold the centre in Dec. 2009, and it is now being promoted as the Trinity Centre. Otherwise the ancient name ‘Trinity’ would remain only in Trinity Street (behind the Tivoli Theatre) and Trinity Lane, which runs from Exchange Street across Market Street to Shiprow.