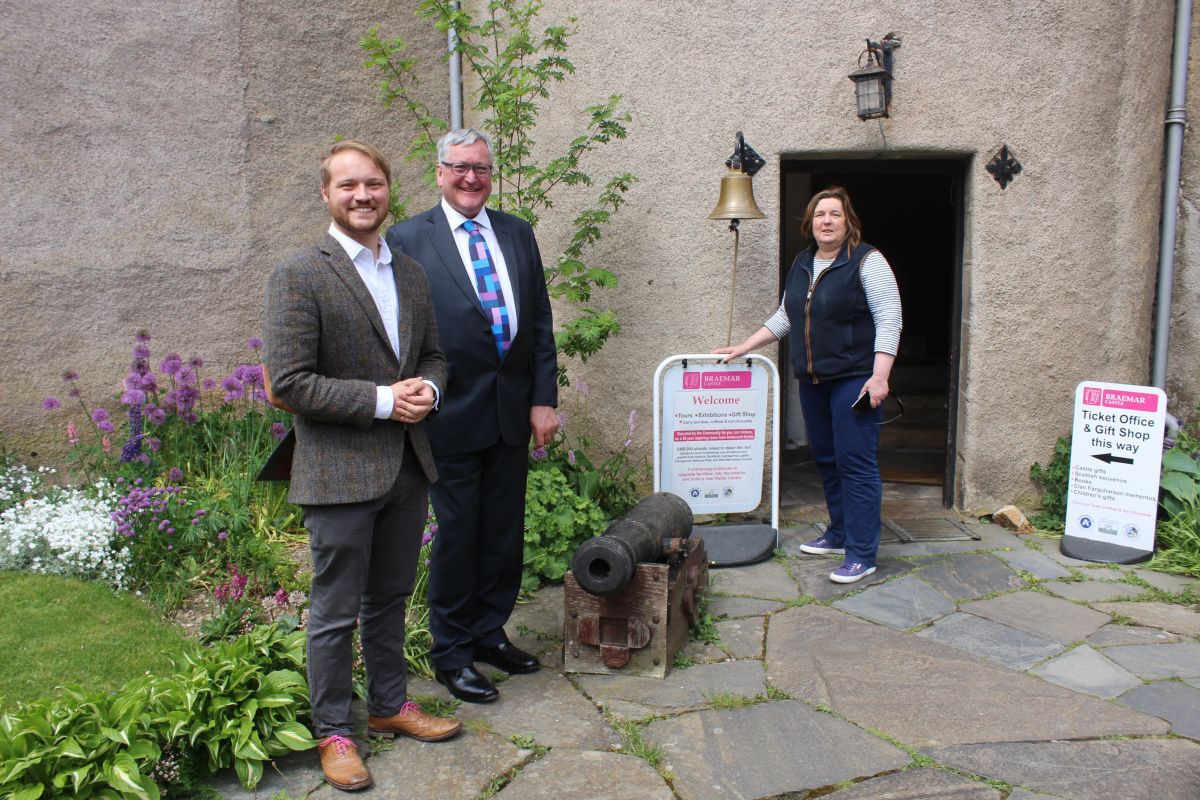 Braemar villagers have been hailed as local heroes by leading politicians as examples of how community empowerment works as they celebrate ten successful years of community management of Braemar Castle.

Braemar Community Limited have seen visitor numbers to the 17th century castle soar by over 277% since they took on a 50-year lease on from Invercauld Estate in 2007.

Raising over £500,000 to renovate the building in the past ten years and – as well as repairing the roof – they now have 12 fully-furnished rooms.

And this weekend the community celebrates a decade of delivery for the iconic tourist attraction with a dinner and hog roast ceilidh.

“This fantastic community initiative plays such a huge role in the economy of one of Scotland’s most rural communities and draws visitors from around the world. I am delighted to have been able to pay a short visit and will certainly be back with my wife and daughter in the summer to have a proper tour.”

“It’s always a great pleasure to visit Braemar as there is so much going on.

“It’s a truly vibrant community and the work they have done in restoring and improving the castle typifies that.

“Braemar is a small but historic village and there has been terrific buy-in from a huge section of the community to bring visitors back to the castle.

“They are true local heroes who can be immensely proud of the work they have done to restore, improve and promote Braemar Castle.

“I’m delighted they have brought the community together to celebrate the first ten years of community management and I wish them well for the next ten years.”

Councillor Geva Blackett, whose husband Simon is chair of Braemar Community Ltd the community company who run the castle and other projects, is thrilled at the progress they have made since 2007.

“Braemar Castle plays an important role in the life of the village and Stuart Donaldson is very aware of this. But I also wanted the Cabinet Secretary to see for himself how hard everyone here works to ensure Braemar is a sustainable community working together for an exciting future.”

The Earl of Mar initially used the castle as his Highland hunting lodge but after it was partially burnt down in 1689 after becoming the first casualty of the first Jacobite uprising.

The castle has changed several times over the years with a long-list of high profile owners – including a Russian princess and an MP. 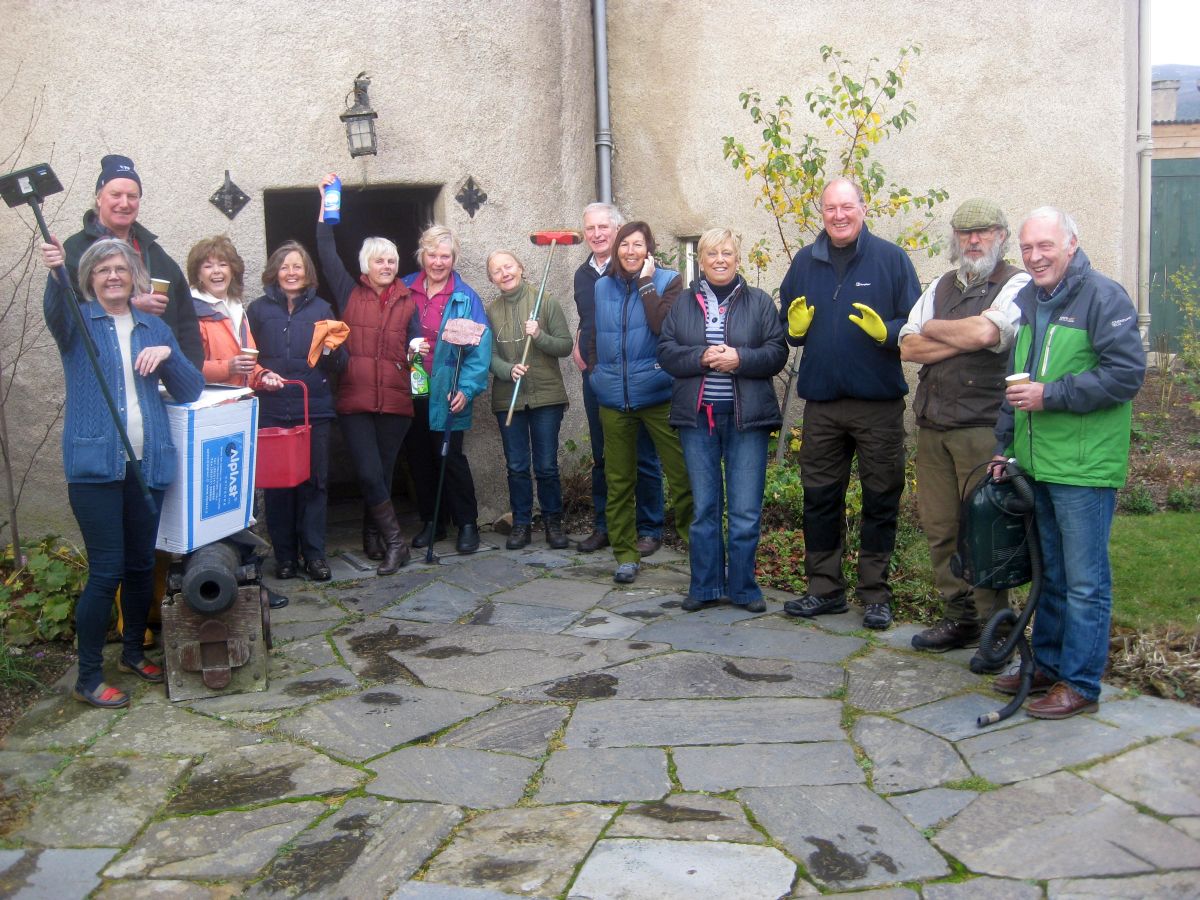 Volunteers from Braemar Castle celebrate the end of their successful 2016 season, during which they attracted over 12,000 visitors.

A Deeside visitor attraction run entirely by volunteers hopes to get its 10th anniversary celebrations off to a flying start by picking up one of the region’s top tourism awards. Braemar Castle is in the running for the visitor attraction of the year accolade at the Aberdeen City and Shire Tourism Awards (ACSTA), which will be announced next week.
It would top off an incredible run of successes for the venue, which is operated as a not-for-profit charity by the community for the community.

Locals were granted a 50-year lease on the property in 2007 and have almost tripled the number of visitors since its first season.

This season 12,045 visitors walked through the doors of Braemar Castle – compared to just over 4,000 in the opening season – and it hopes to hit a target of welcoming 20,000 people to the historic property by 2020.

ACSTA judges shortlisted Braemar Castle for the award after learning how the community had transformed the property, which had closed in 2004, into a focal point to provide entertainment and education to tourists, and bring business into the village.

The group responsible for running the castle has been able to appoint a full-time manager – while still undertaking the lion’s share of work – and have also raised over £440,000 to carry out repairs to the roof and chimneys.

The castle will battle it out in the best visitor attraction category with Royal Lochnagar Distillery and the Museum of Scottish Lighthouses in Fraserburgh. The winner will go on to represent the region in that category at Scotland’s national tourism awards – The Scottish Thistle Awards – which are announced in the spring.

“We want to give our visitors the very best experience of Highland Scotland in an authentic setting.  And we want the Castle to act as a magnet to bring visitors to this area.

“The castle is operated by the community for the community and its success is down to the hard work and commitment of our local volunteers.  With our 10th anniversary on the horizon, it’s a real accolade to be recognised and shortlisted for this award.”

Visitors who arrive at the castle can have a personal guided tour with a local volunteer, and an audio tour in both English and German is also available. They find the rooms presented as though the occupants have just stepped out – they can handle the artefacts and sit on chairs as though they were guests.

Volunteers work in partnership with local tourism businesses and events to cross-promote the area, and also stage exhibitions at the castle which change on an annual basis. They held re-enactments and events to celebrate the 300th anniversary of the 1715 Jacobite uprising, and even found time to revive a local hill race.

In addition, the castle has been awarded a Certificate of Excellence by interactive travel forum Trip Advisor, and has been rated the top thing to do in Braemar by the site’s many users.

“Over the past eight years we have refined our brand and we are confident in our distinctive product,” says Doreen.

“We aim to support and complement the current and future village offerings to establish Braemar as a destination.”

ACSTA aims to celebrate the very best of tourism businesses and individuals who help make stays in the region a memorable experience for guests. Awards will be presented in 15 different categories from most hospitable hotel to friendliest pub and from regional tourism ambassador to rising star.

Further information about the awards is available at www.acsta.co.uk