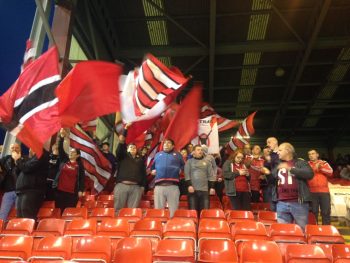 Since Aberdeen won the League Cup in 2014, their success in cup competitions has been non existent.

Tonight’s quarter final game against the team that they have had scant success of late, had the fans hoping that after their slow start to the season, they would follow up their away victory against Dundee with another emphatic victory.

A fine sunny day made conditions ideal for football. Aberdeen had planned lining up with two changes; with Stockley and Burns starting, and McGinn and Rooney on the bench, both of whom have been looking a bit tired in previous games.

But Hayes injured himself during the warm up giving McGinn a start.

Craig Thomson refereed this game, a game that was always going to be a close run thing.

Throughout the game Aberdeen tried their best to break down the resolute St Johnstone defence without giving keeper Zander Clark any saves to make. Saying that Joe Lewis in the home defence had nothing to do either. The first shot came from Shinnie after a Stockley cross, but it went well wide.

A crowd of around 9,000 saw four first half bookings, two each side, as both teams fairly evenly matched each other. Loan signing Maddison continued his flair playing as seen in the game against Dundee at the weekend, despite not getting enough of the ball.

Cup games under floodlights are the stuff that little boys, and girls, remember into their grown up years. This one however will not be one of them.

The tousy first half ended leaving the fans feeling a tad nervous, with the game having a no scoring draw written all over it despite a great ball in from Maddison to McGinn on the right wing, who crossed it to Burns who was running in. His shot went just past the post.

The visitors made their first substitution only three minutes into the second half, and they started off by going forward towards the Aberdeen goal, to no avail. The home team then set off on the attack, but that too petered out when a very poor Stockley ball fell woefully short of Logan and was easily tidied up the Perth men.

Meanwhile the signing section kept up their vocal encouragement to the accompaniment of their solo drummer.

In the 68th minute Wotherspoon had the ball in the back of the net, but, much to the relief of The Dons fans, he was clearly offside.

Aberdeen then made a double substitution, replacing Burns and Stockley with Pawlett and Rooney. The latter ‘s running in the opposition half made their defence work harder.

Five minutes from the end, St Johnstone were awarded a free kick 30 yards out. The same player who had the ball in the net, Wotherspoon, took the kick, which went over the wall and was heading for the net were it not for a remarkable save from Aberdeen’s number one, who deflected it onto the crossbar. The ball bounced back into play, and Ash Taylor cleared.

On the 90 minute mark, Shinnie made a run down the left, all but ignoring the three defenders covering him, he crossed the ball into the box in front of the home fans in the Richard Donald Stand to find the head of Rooney who directed the ball into the net.

The resultant jubilation was tinged with a fair dose of relief. The visitors pressed hard in the couple of minutes added on, but the men in red fought even harder to hold onto their lead.

St Johnstone, up until that point were seemingly content with a draw, and were totally deflated when the final whistle blew denying them extra time.

Aberdeen now go on to play Morton in the semi final,who incidentally, were the first professional club that manager Derek McKinnes played for.

Two footnotes from the game.

Before the game Willie Miller was pulling into the club car park to do his Radio Scotland duties. The lady on duty, trying to be helpful, asked him,

“Have you been here before? Do you know where you are going?”

The next match is Sunday 25th with The Rangers being the visitors.