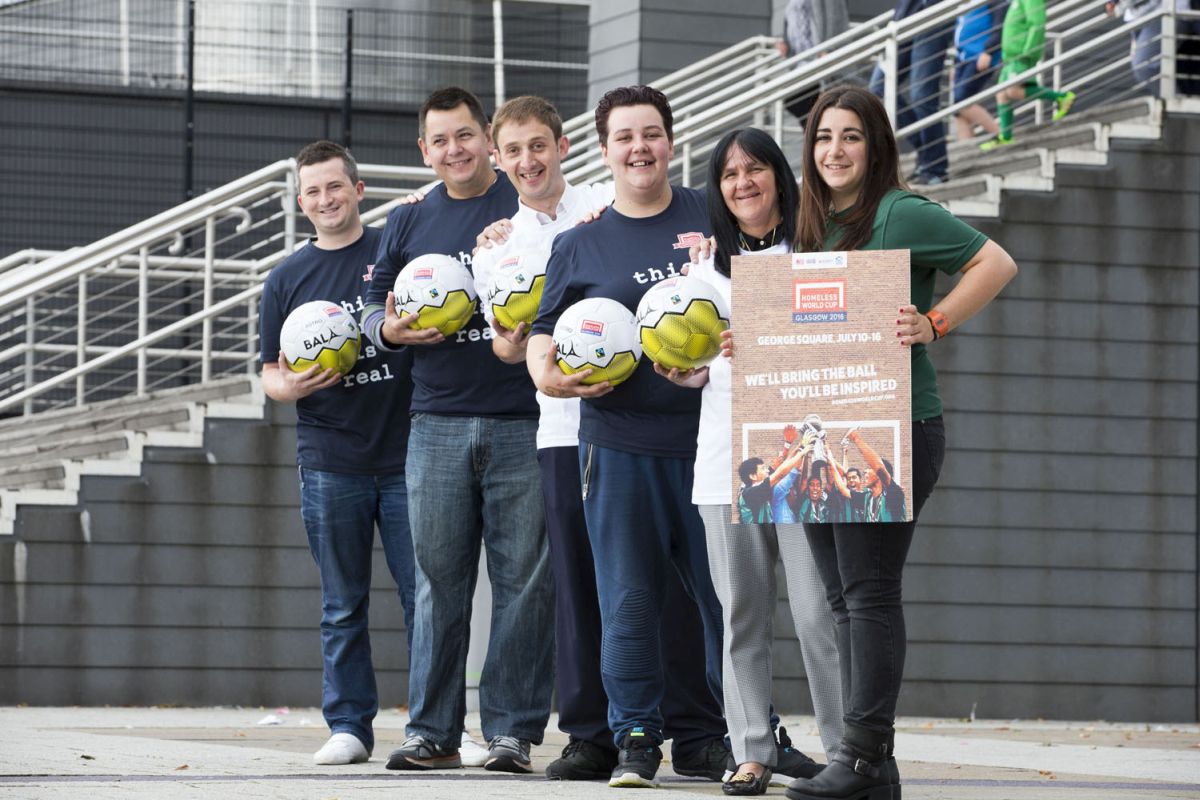 Today’s final training session, held at the Emirates Arena, brought together many of the volunteers who have willingly given up their time to support the global tournament.

A group from Glasgow posed for a set-piece picture (available royalty free, captions embedded) outside the venue as the seven day countdown begins.

With building work starting today on George Square, anticipation is rising ahead of the 14th Homeless World Cup. Scotland’s men and women take on Hong Kong and Norway, respectively, in their opening fixtures, following the opening ceremony which starts at 12.30pm.

Many of the Spectator Services volunteers will come from a strand of legacy activity funded by the Big Lottery Fund. This will see about 120 participants who have previous or current experience of homelessness supported as part of a long term strategy to support them to build a life they want for themselves. Around 40 of the group have also travelled from all across the world – at their own expense – to be in Glasgow to support the competition.

100,000 spectators are expected to visit the Homeless World Cup during the week-long festival. Entry is free & no tickets are required, albeit it is expected at key times (particularly when Scotland play) it will be very busy so spectators should arrive in plenty of time for games they wish to see.

“The Homeless World Cup tournament wouldn’t be possible without the support from all of our volunteers, they are the ones that make it happen. This year’s response has been amazing and we have engaged 350 volunteers. All these volunteers are donating their time and energy to help us deliver this world class event, and we couldn’t be more grateful.”

“We’re providing a life-changing opportunity for an army of volunteers, many of whom have been affected by homelessness themselves, with a package of support and opportunities which will continue long after the last ball has been kicked. The Homeless World Cup not only shines an issue on the problem, but inspires people to do what they can to tackle the problem.

“With the support of the Big Lottery Fund and our partners, I have no doubt that our volunteers will be equally inspired – and be the heart and soul of what promises to be yet another outstanding event for the city.”

The legacy project will not only support volunteers who have faced homelessness during the event, but will continue with sport and cultural opportunities on offer to those participating. Maureen McGinn, Chair of the Big Lottery Fund in Scotland added:

“The Homeless World Cup inspires people to change their life for the better. That is an aim shared with us at the Big Lottery Fund as we want our funding to make a truly life-changing and inspirational difference to people across Scotland. This volunteering initiative is unique not just for the impact it will have on people during the event but afterwards as well through a range of sports and cultural activities.

“We know from our previous funding that Glasgow Life has a proud record of delivering volunteering opportunities at the 2014 Commonwealth Games and this is another legacy project which we are delighted to support.”