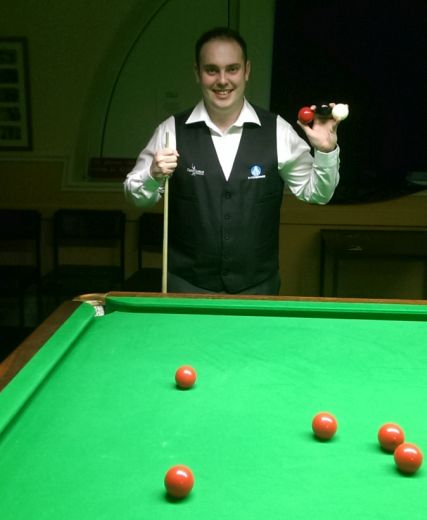 An Aberdeen snooker player is seeking to break into the big time – but fears that without sponsorship he may never achieve his dream.

Marc Davis (27) is ranked 17th in the amateur Order of Merit and has represented his country in international tournaments.

That’s despite working full time, with family commitments and not currently having the backing of a sponsor to help support his attendance at snooker events.

Marc says that not having a sponsor to back him is seriously impeding his chance to progress.

He feels he has a lot more to offer and with more time to devote to practise, and being able to take part in more tournaments, he could develop and grow as a player – and put Aberdeen on the snooker sporting map.

Having funding to compete in the World Snooker European Tour, qualifying schools and open events would be a dream come true for Marc.

“Last season I finished 17th on the amateur Order of Merit rankings and I was the highest placed Scottish player ahead of Eden Sherav and Rhys Clark, who turned pro in the summer, and Scottish champion Dylan Craig.

“I beat some full-time players including the world number 70 which I think shows I have the ability to compete against the best players.”

The father-of-two works full time as a customer services manager in Aberdeen. Holding down a full time job to cover living expenses means that Marc doesn’t have the flexibility – or the funds – to travel to most of the national and European snooker events.

Marc says he’s not alone in finding it hard to secure sponsorship, adding that it is and it is tough for sportspeople in all disciplines to gain backing to allow them to train, develop and grow their talent.

He recognises that the current slump in the oil industry means that are less sponsorship deals being made available but points out that sporting achievement can derive wider benefits for an area.

He cites golfer Paul Lawrie as being a tremendous ambassador for sport in the North-east, showing what sporting success can bring.

Through the Paul Lawrie Foundation, the 1999 Open champion works to encourage and develop young talent.

“It’s my ambition to compete at the highest level of snooker and I believe that, with sponsorship support, I can do this.

“It would be amazing to get three year sponsorship but any support would be extremely welcome.

“Lacking sponsorship is holding me back from doing better things and it’s quite incredible how well I do in tournaments considering I don’t practice as much so go to events less prepared than others yet still get results.

“I’ve worked hard for 15 years to get to this standard and I just want to be able to compete and achieve my very best.”

Marc would love to hear from anyone interested in discussing sponsorship opportunities and can be contacted at marcdavissnooker@googlemail.com or 077602 46618.