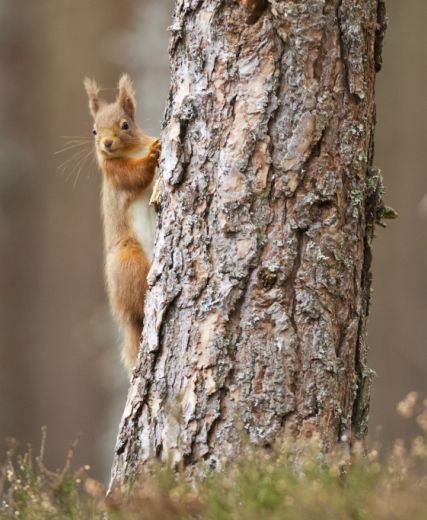 An innovative new project by conservation charities Trees for Life and the Highland Foundation for Wildlife aims to secure a major increase in the range of Scotland’s red squirrel populations for the first time in decades.

The Caledonian Forest Wildlife Project – which launches this summer – has the ambitious goal of establishing 10 new populations of the species in the Highlands over the next three years, with the long-term aim of boosting red squirrel numbers in Scotland by more than 10 per cent.

It will also provide a unique opportunity for volunteers, including those from remote communities, to take an active part in wildlife conservation.

The project will involve conservation experts carefully relocating red squirrels from areas of Scotland where they are thriving to remote forests in the north-west Highlands where there are no squirrels at present, but good quality habitat for them.

It will build on pioneering work by Roy Dennis MBE of the Highland Foundation for Wildlife which has demonstrated impressive results – 40 red squirrels that he moved into woodlands at Dundonnell in 2008, for example, have already expanded into a thriving population of around 400, and two further translocations were also very successful.

“Through an effective and proven approach, this exciting initiative will help red squirrels return to the forests where they belong for the first time in decades – leading to significant new populations of this iconic species and offering real hope for its long-term survival,” said Alan Watson Featherstone, Trees for Life’s Executive Director.

“Increasing red squirrel numbers will also benefit our native forests and the many species that depend on them, because red squirrels are nature’s tree planters. They collect and bury thousands of tree seeds each autumn, but frequently forget these hoards – which in spring take root and so expand our woodlands.”

The project has been made possible by a grant of more than £61,000 from the Heritage Lottery Fund.

“Thanks to National Lottery players, HLF grants have helped to protect an amazing range of landscapes, habitats, and species of plants and animals. The Heritage Lottery Fund is delighted to support the Caledonian Forest Wildlife Project – which will provide opportunities in both rural and urban communities for volunteers to learn about wildlife, as well as training in practical conservation skills.

“We are pleased to support projects that will stimulate an interest in our precious natural heritage and so help conserve it for future generations.”

Urgent conservation action is needed to secure the long-term future of the red squirrel, which is increasingly rare in Britain and is recognised in the UK Biodiversity Action Plan as a priority species. Only an estimated 138,000 reds are left in the UK, and their populations – devastated by disease and competition from the introduced grey squirrel – are still in decline.

Red squirrel numbers have also been adversely affected by the loss of their forest homes, which have been reduced to isolated remnants. Although many forests in the north-west Highlands offer suitable habitat, red squirrels travel from tree to tree and do not usually cross open ground. This means they cannot spread back to areas of fragmented woodland from where they have disappeared.

The Caledonian Forest Wildlife Project will see squirrels transported to carefully selected release sites in specially constructed nest boxes, lined with hay for comfort and warmth, and provisioned with peanuts for food and apple for hydration. These nest boxes will then be nailed to trees and their exit holes filled with moss – so that the squirrels can find their way out in their own time, once people have left, minimising stress for the animals.

Food will be provided for several months after release, to help the squirrels settle easily into their new surroundings.

Animal welfare measures will be central to the project. Once a squirrel has been caught, the trap will be covered with a dark cloth to keep the animal calm and reduce stress. All traps will be checked at a maximum of two-hourly intervals, and all squirrels will undergo a health check by a qualified veterinarian, to ensure that diseased animals are not introduced into the new populations.

No more than two squirrels will be taken from any donor site, so that their removal does not negatively affect the donor population.

Volunteers – including those from remote communities and disadvantaged backgrounds – will be able to join training courses covering red squirrel surveys and conservation, and will be given the opportunity to help monitor the progress of the translocations. An online training programme will allow people to develop the skills to monitor red squirrels in their local area.

The scheme will also involve the creation of partnerships with landowners, ongoing monitoring, and pioneering research to learn more about red squirrels, in order to strengthen conservation action. Talks and seminars will be held with communities to inspire people to get involved with the conservation of endangered wildlife.

Trees for Life is dedicated to restoring the endangered Caledonian Forest in the Scottish Highlands – one of the UK’s wildest landscapes. The award-winning charity’s volunteers have helped to plant more than one million trees at dozens of locations, and Trees for Life aims to establish one million more trees by planting and natural regeneration by 2018. For more information, see www.treesforlife.org.uk or call 01309 691292.

* The red squirrel (Sciurus vulgaris) lives in conifer-dominated boreal forests and in broadleaved deciduous forests. It is not ideally suited to woodlands now covering much of Britain, and has been outcompeted by the more adaptable introduced non-native grey squirrel (Sciurus carolinensis) in much of the country. Greys also spread and transmit squirrel pox virus, to which they are immune but which is lethal to reds.

* While mainland Europe enjoys healthy populations of red squirrels, the species is now extremely rare in the UK – with current population estimates being 138,000 individuals. Approximately 120,000 of these are in Scotland, 3,000 in Wales and 15,000 in England.

* The red squirrel occurs throughout most of mainland Scotland, with the largest populations in Caledonian Forest remnants in the Highlands, and in Dumfries and Galloway. The Scottish population has increased slightly in recent years, probably due to the expansion of tree cover – but the animal’s range and population would have been much larger in the past, before the loss of most of the Caledonian Forest.

* The Eurasian red squirrel is widely distributed in Europe and northern Asia, from Scandinavia south to Italy and Bulgaria, and from Ireland and Britain across to Russia. Beyond Europe, its range extends as far as Mongolia, China, Korea and the northernmost of Japan’s islands.