On Friday 10 July people gathered outside the London Danish Embassy. Denmark, a member state of the European Union, is meant to protect cetaceans. This legal obligation means nothing to the nation. It protects the Faroe Islands, where scores of dolphins and whales are driven to shore each year to be butchered alive.

The resulting bloodbath greatly pleases the islanders, who see it as a rite of passage. It rightly reviles the rest of the civilised world. What is Denmark playing at? Who were these protestors? Suzanne Kelly joined the protest to report and support. 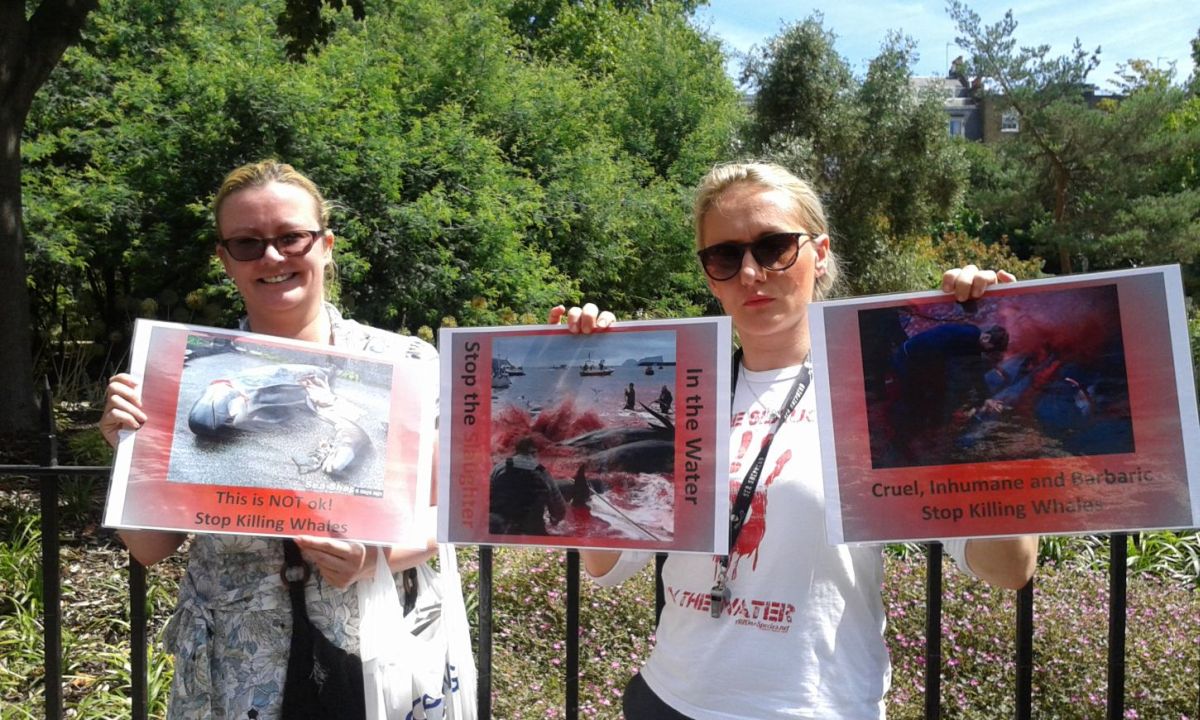 The Faroe Islanders had just engaged in another ‘grind’ – the driving of whales and dolphins to the shores to be horribly killed.

The tiny island nation relies on Denmark for protection.

The Faroese are outwith the EU, but rely on this EU nation to uphold its grizzly tradition.

Last year Sea Shepherd personnel were arrested by Denmark while trying to stop this slaughter.

The Danish government has bizarrely claimed jurisdiction, and a trial – in Denmark to uphold Faroese tradition – keeps getting postponed. The Danes refuse to return Sea Shepherd’s vessel until the trial, which rather conveniently suits their and the Faroese needs.

The Faroe Islands have also just imposed a new draconian yet unworkable law aimed clearly at stopping Sea Shepherd from protecting marine life. Anyone – including tourists – is subject to arrest and up to two years imprisonment (perhaps in a Danish cell?) if they do not immediately report any cetaceans they see.

“There is something truly sinister about a law that aims to silence those who fight to protect life, while protecting those engage in this blood-thirsty practice. It is this exactly this ominous state of affairs in the Faroe Islands that requires Sea Shepherd’s presence in the region.”

How anyone is meant to prove or disprove who did or didn’t see a pod of whales is anyone’s guess.

It is worth noting the resulting meat from this entire bloodbath is largely inedible. This is blood sport for the sake of blood. The toxins in the meat and fat are such that pregnant women should not go near it, and that those who would willingly eat such a product are meant to eat no more than 4kg per year. Each animal taken then dies horribly without even the excuse the food is needed.

Who came and why they came:

“I am here because of what is going on in the Faroe Islands at the moment. It is inexcusable. They say it is a rite of passage for teenage boys, but it is an outdated blood sport.”

Aga and Kerry were two of the protestors taking a stand against the senseless slaughter. They said:

“It’s the 21st century, and there is no place in Europe for such a barbaric mass dolphin slaughter.”

We talk about the toxicity and about the new law. Kerry tells me:

“I don’t see how they can implement it; you can just say you didn’t see any cetaceans? ‘What cetaceans? Where?’ but it is ridiculous.”

“It’s disgusting the way they cover up what is going on in the Faroe Islands and sadly young children take part in this. It is so sad for future generations. I don’t think anybody should be involved in this. I am really worried for the future for young people who can do this; they smile because the adults say it is OK.”

Sally’s quite right about the indoctrination of this and any similar abuse carried out on animals. Psychologically the result is to destroy empathy with living creatures and this is utilised by military forces that still to this day torture animals under the guise of ‘medical trauma training’ for military medical personnel. 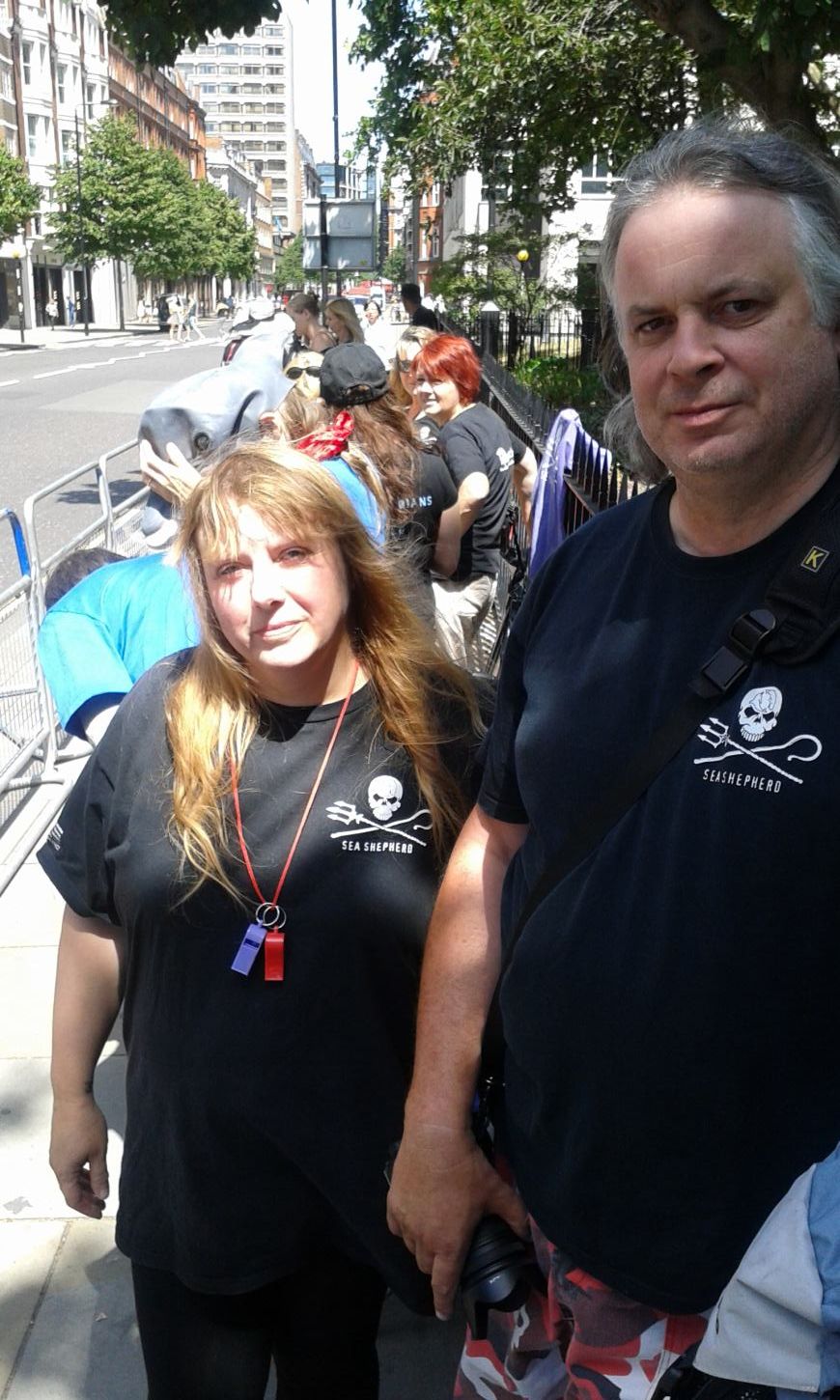 Such training could well take place at hospitals (particularly in high crime areas), but the goal of making people immune to the suffering of animals is clearly a common goal shared by the Faroese and the military forces who want to discourage any form of empathy.

The protest was peaceful, as opposed to the Faroese cetacean torture and killing. How much longer can Denmark continue its self-contradictory behaviour in light of the negative press it receives, diplomatic pressure, and the heightened awareness and disgust the public throughout the world feels?

It is either an EU partner and as one opposed to cetacean slaughter, or it is the protector of an outmoded, unnecessary, cruel form of animal torture.

If Oscar Wilde said that a fox hunt is ‘the unspeakable in pursuit of the inedible’, then what would he make of The Faroe Islands grind?