If you are arrested in the UK, surely that means you’ve committed a crime. The stigma of being arrested can negatively impact your career prospects, your family and your social standing. The police only arrest those who are committing a crime, who have broken the law, and need to be stopped. Terrorism laws are there only for people intent on committing terrorist acts.

Nothing could be further from the truth. Suzanne Kelly reports as part of a continuing series. 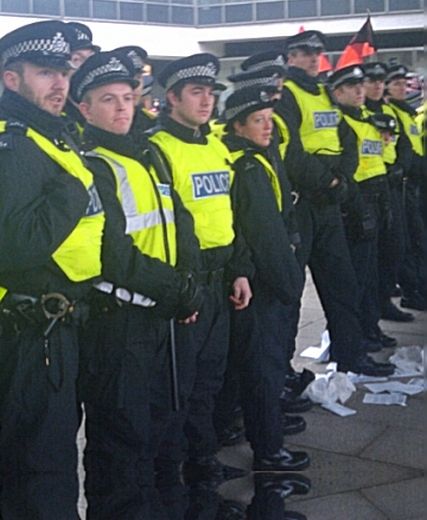 Guilty Until Proven Innocent – If You Step Out Of Line

This year is the 800th anniversary of the Magna Carta, which was meant to enshrine rights for all. Most of its principles are long since forgotten.

Tony Blair created a raft of legislation when in office, and arguably British citizens lost even more rights. Blair’s mania for media manipulation had many dire consequences, not least the ‘dodgy dossier.’

Not many remember the story of Walter Wolfgang. But we should.

“Walter Wolfgang age 82, was ejected from the hall [Labour Party Conference] after shouting “nonsense” as Foreign Secretary Jack Straw defended Iraq policy. How did New Labour treat a long-standing member who disagreed with the serpentine Straw? The fairly new terrorism laws were used to intimidate Wolfgang.

“Police later used powers under the Terrorism Act to prevent Mr Wolfgang’s re-entry [to the conference], but he was not arrested… Mr Wolfgang, who escaped Nazi Germany in 1937, is a member of the Stop the War Coalition.”

If a pensioner who heckles a speech supporting Blair’s attack on Iraq can be prevented from heckling because he might be a terrorist, how safe are we? Not safe at all is the answer. Can the threat of being arrested hinder legal, legitimate activities? Absolutely.

Arrest and Protest: A Case Study

It is not surprising that more and more people are turning to peaceful protest – we are losing our rights at the same time the 1% have widened the wealth gap, while in some instances avoiding tax, breaking banking laws and doing so with complete impunity. Many people consider the police to be an out-of-control, unilaterally-acting and capricious force. Facebook groups are documenting police brutality.

Just this week the chief constable Stephen House was accused of lying – the stop and search of children (with some 91% of the thousands searched being searched without any contraband found) is indeed continuing despite his assurances to the contrary. If protest is on the increase, perhaps the police should look to their actions as being causal.

This is an account from a peaceful protestor, Donnachadh McCarthy, who attended an Occupy Democracy event in London in early February.

“Just a quick note to say that the police have informed my solicitor that no charges will be laid against me after their aggressive over the top mauling of me at the Occupy Democracy peaceful protest in Tarpaulin Square on Saturday evening.”

“The outrageous accusation that my standing peacefully beside Boris Johnson’s private security corporation guard (AOS), as they were seeking to evict peaceful pro-democracy protesters from Tarpaulin Square, with a cardboard placard shaped like a coffin, with the inscription “UK Democracy RIP – killed by corporate billionaires”, was seeking to “intimidate a court witness and deter them from giving evidence”, never had any substance whatsoever in fact.”

“As I said in my police statement “I gently, resolutely but firmly deny that I did anything to intimidate anyone at the peaceful protest in Parliament Square”.

“Yet about 12 police officers swarmed me, took me to the ground and threw me in a police van and then held me in solitary confinement for 16 hours, whilst they futilely tried to find non-existent evidence.”

“This FOURTH arrest whilst peacefully protesting in Tarpaulin Square over the last 5 months, will not deter me from being there for the next pro-democracy protest by Occupy Democracy on March 7th.”

“This leaves me still facing 6 other trumped up charges, including one trumped up charge of “common assault” for bumping into a private security guard whilst trying to protect a peaceful protester from being attacked by the guards. This trial is on June 18th. Four other charges relate to my standing peacefully with a folded tarpaulin under my arm.”

McCarthy sums it up rather succinctly when he writes:

“The capture of our democracy by The Prostitute State continues to destroy our planet and facilitate a criminal concentration of wealth in the hands of the 1%.”

Journalists Are Not Immune Either – Anthony Baxter and Richard Phinney

Award-winning film maker, journalist, documentary maker – and police suspects: Anthony Baxter and Richard Phinney’s arrest at the Menie Estate was rightly condemned by the National Union of Journalists. Was the arrest intended to intimidate or stop them? You could be forgiven for thinking so:

“Shortly after the bulldozers moved in to destroy the Menie Estate dunes, we discovered Mr Trump’s workers had cut off the water supply to 86-year-old Molly Forbes – Michael’s elderly mother – for nearly a week, and so my Producer Richard Phinney and I went to interview Mr Trump’s chief greenkeeper who also doubled as head of building works.

“After the interview, Richard and I were both suddenly arrested on the property of another local resident – Susan Munro. We were then driven miles to Aberdeen, banged up in separate prison cells for several hours and stripped of our possessions. DNA, fingerprints and photos were all taken and camera equipment and footage impounded. We were both charged with ‘a breach of the peace’ a criminal offence which you can go to jail for in Scotland.

“The National Union of Journalists was furious and called our arrest ‘a blatant example of police interference stopping bona fide journalists from doing their job.’ The criminal charges were eventually thrown out by the Crown Office. But my arrest was a turning point, in what had become an extraordinary journey. I was now unwittingly part of a deeply disturbing and troubling story. And what had begun as an exercise to purely document what was happening, had now become a feature film – and I was in it.”

The way in which they were treated is virtually without precedent for journalists in the UK – let’s hope it stays that way.

The very broad-brush charge ‘breach of the peace’ can mean almost anything – no one is immune from being taken into custody on this charge in Scotland.

The two were released with a caution – this meant they never got their day in court –which would have allowed their legal team scope to clear their names completely. It also leaves a sword of Damocles over their heads – if they get into any further dealings with the police, this caution is on their record.

An abuse of power? A police intervention into journalism? It seems so.

Protect yourself – from the police

What do you do if you find yourself arrested? What should you do? Who do you call? What are your rights?

Here are some excellent resources:

Some basic principles to keep aware of include:

There are different courses of action you can take if you feel the police have treated you unfairly and you want to complain:-

take collective action by joining or starting a campaign to monitor and change police practices.”  http://www.adviceguide.org.uk/scotland/law_s/law_legal_system_s/law_police_s/police_powers_scotland.htm

Anyone with mental health issues is meant to have an appropriate responsible adult help them through the arrest procedure.

The state of the wider world today is no reason for UK citizens to surrender more of their privacy, their freedom and their basic rights. It is worthwhile making sure you know what legal protection you are entitled to.

10 Responses to “We Need To Talk About The Police No. 6 – Arrest Developments”