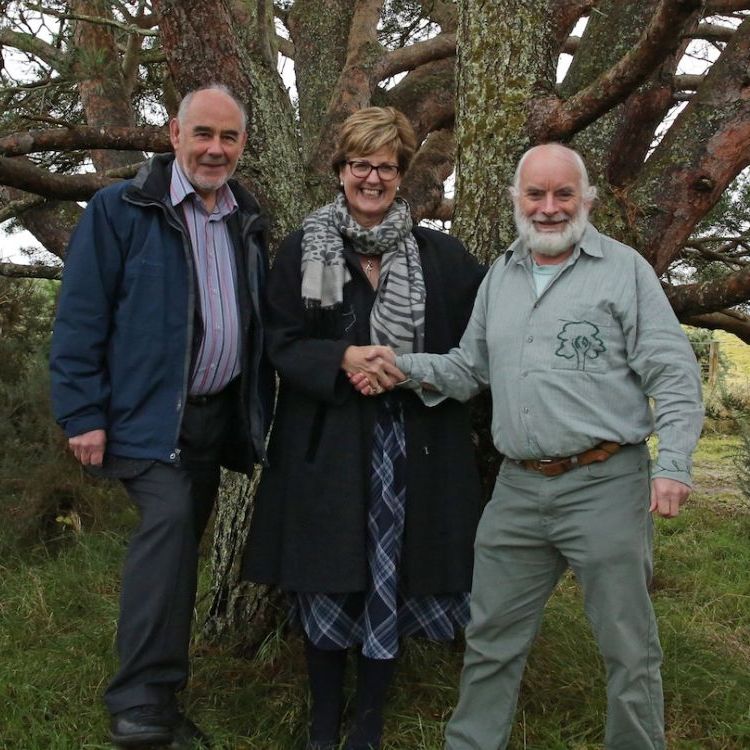 A leading wildlife film-maker is backing a bid by Trees for Life to transform an iconic but derelict mountain bothy into an eco-friendly weather-tight base that will be used to launch a quarter century of forest restoration in one of Scotland’s great wildlife wildernesses.
Glasgow-based cameraman and film-maker Gordon Buchanan is supporting the conservation charity’s appeal to raise £30,000 to renovate Athnamulloch Bothy in Glen Affric on the Forestry Commission Scotland managed National Forest Estate.

And in a major boost, Trees for Life’s ‘Build the Bothy’ appeal has just secured a grant of £20,000 from the Moray-based Gordon and Ena Baxter Foundation, which supports worthy projects and charitable organisations, particularly in the north of Scotland and the Highlands and Islands.

The initiative to restore Athnamulloch Bothy is key to the next stage of large-scale forest restoration work being delivered in partnership by Trees for Life and Forestry Commission Scotland, in which volunteers will plant 250,000 trees to extend Glen Affric’s endangered forests further west, creating vital forest corridors and habitats for unique wildlife.

“For me, time spent in Glen Affric’s ancient forest is precious. Watching eagles soaring against the mountain peaks, red squirrels in the branches and glimpsing pine martens hunting amongst the heather is as wild and remote an experience as Britain can offer. How lucky we are to have this unique and wonderful landscape,” said Gordon Buchanan.

“The problem is that this forest is tiny, and these ancient pines are just a fragment of the forest that once filled the glen. Further west, the grasslands are silent and empty, and the only signs of the former forest that once grew there are tree roots scattered in the peat.

“I am thrilled to be supporting Trees for Life’s appeal for a new base in Glen Affric. It’s not possible to plant trees in this remote location without a place for volunteers to stay. We now have a fantastic opportunity to renovate Athnamulloch Bothy in the western glen, saving it from dereliction and bringing it back to life.”

Lying to the west of Loch Affric, the remote bothy became unsafe and was closed in 2008. Trees for Life’s volunteers had previously used it as a base for planting the first new Scots pines to grow in the area for centuries, but restoration of the Caledonian Forest in this part of the glen stalled with the bothy’s closure.

However, detailed plans have now been drawn up to renovate the building to a high ecological standard while retaining its rustic character, and the charity has signed a 25-year lease for the building with Forestry Commission Scotland. Generous donations and grants have contributed towards much of the total £137,000 cost.

The most recent of these grants is £20,000 from The Gordon and Ena Baxter Foundation based in Fochabers. Brothers Gordon and Ian Baxter, with their wives Ena and Margaret, established the foundation in 1981 so that the family could continue to extend its support for the Fochabers and district communities.  In the last 12 months, the Foundation has widened funding activity to assist projects in the north of Scotland and the Highlands and Islands.

“We’re proud to support Trees for Life’s restoration of the Caledonian Forest and its Build the Bothy appeal. It is inspiring to think that this will lead to the planting of thousands of trees and create opportunities for hundreds of people to benefit from being physically active in spectacular Glen Affric,” said Kay Jackson, Manager of the Gordon and Ena Baxter Foundation.

A final £30,000 is now needed to complete Trees for Life’s most ambitious fundraising endeavour of recent years. This will bring the bothy back to life with new timbers and flooring replacing rotten woodwork, and the installation of a kitchen, living room, bedrooms, drying room, and a bathroom with eco-friendly energy and water systems.

To support the Build the Bothy appeal, please visit www.treesforlife.org.uk or call 0845 458 3505. The names of those donating at least £250 will be listed on a celebratory plaque at the bothy.