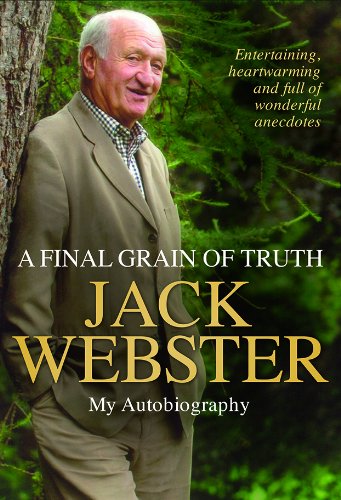 There was almost a sense of finality about this volume when I picked it up. ‘A final grain’, Jack? It’s as if the author’s preparing for leaving us.

All is well with Maud’s kenspeckle writer though.

The closing chapter, in summarising how lucky he feels to have experienced an active and fulfilling life, ends with optimism.

Webster isn’t ready to bow out yet.

The previous two volumes of A Grain Of Truth were well-received and sold very well.

The final part revisits several of the life-changing and life-enhancing chapters, this time to reflect more on the writer’s Buchan upbringing and how that has influenced his colourful career, most notably as a features writer in the Scottish Daily Express and in the freelance career which followed.

Maud is frequently his mirror, and more than once his North East background and down-to-earth approach has allowed him access to closely-guarded inner sanctums of the famous, most notably the reclusive estranged widow of author Alistair MacLean. That, of course, leads to a dinner and a revelation about Wallis Simpson…

Webster’s memoir also demonstrates that he has an eye and nose for a story and was frequently willing to take a chance to get it, enabled by editors whose faith he earned by delivering insightful copy almost without fail. It is sobering to realise that his successes were delivered before the internet and mobile devices became commonplace journalistic tools.

A Final Grain Of Truth also gives Webster an opportunity to give his take on modern life.

Born in 1931, his passions are the personalities, especially in cinema, theatre and sport, whose work he admired as a youth and young man. He was lucky enough to spend time with many of them. Even if several of these names are unfamiliar to those of succeeding generations, Webster’s enthusiasm has one tapping into Google to find out more.

Buchan is known for its conservatism and Webster is very much a son of the region. His parting shots include views on Royalty, trade unionism and Margaret Thatcher which will not please everyone, yet epitomise his honesty and hame-draughtitness.

JACK WEBSTER – A Final Grain Of Truth: My Autobiography