This was my first visit to Cineworld at the Beach in a long time, and it was to sit beside my sleeping father, an avid Lee Child reader, and watch Jack Reacher. Andrew Watson writes. 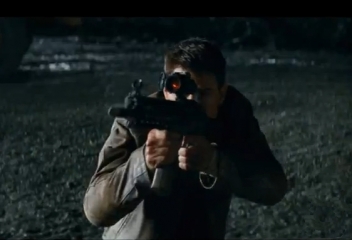 To be fair, my dad didn’t even need to be rudely awakened by special effects to maintain a steady gaze upon this Tom Cruise adaption of Child’s novel, One Shot.
I’m used to his sleeping antics by now, but felt inclined to lie about this particular outing because of how aggrieved I’ve been by his past behaviour!

Anyway, though he claims he wasn’t too impressed, Dad’s wakefulness is testament to the quality of the film, no matter his misgivings.

Foremost of these is the selection of the pint-sized Cruise for the leading role: Dad tells me that Reacher’s at least 6’6” in the books.

Having said that, there were also some gripes that I had early on in this blockbuster. What’s with the conspiratorial whispering between Reacher and Helen Rodin (Rosamund Pike)?

I know that there are scandals at play here, as Helen and Reacher tussle with her powerful father (Richard Jenkins) to prove the innocence of supposed murderer, James Barr.  Despite this, it all seemed overtly theatrical and, frankly, irritating.

Barr stands accused of randomly laying waste to passers-by for sick kicks, and his track record as a sniper in the army screams his guilt. However, being based on the thrilling storytelling deployed by Child, it’s safe to say that it’s not necessarily a simple open and shut case.

Not for Reacher, anyhow, who, I’ve read, can be readily compared to Sherlock Holmes in his powers of deduction. I’d agree with that.

Initially dismissed as paranoid and unaccustomed to the largely non-ulterior motives of civilian life, being an ex-military policeman, Reacher nevertheless convinces Helen to look at potential corruption within her father’s department.

Even the viewer, impressed as they may be by Reacher’s unbeatable fighting chops, doesn’t know what’s going in his head, given the man’s mysterious and recalcitrant nature throughout.

What he keeps to himself, he keeps from his enemies, as he tries to stay two steps ahead of the game.

He then overcomes a third man holding a gun to his head, as his back is turned.

Not until he’s ganged up on by a horde of young men who insist that Reacher disrespected their sister, and the suspiciously quick police response, did my Dad and I really think there was a deeper conspiracy at play.

All very serious stuff.  Though there are lighter moments, too.

Take for instance the fight scene in the bathroom.  Reacher’s proven to be beatable, with an unsuspected blow to the head with a baseball bat.  He falls into the bath, disorientated.  Cue comical rush by the two henchman to beat the crap out of him, only to foil themselves squeezing through the doorway at the same time.

It doesn’t stop there, either.  They then unsuccessfully play ball with him, hitting the rim of the bath as Reacher somehow remains out of reach.  This buys a now seemingly human Jack time to recover and prevail.

He then overcomes a third man holding a gun to his head, as his back is turned.

So Reacher can triumph over certain death, despite a pistol at point blank range, but he can’t handle or anticipate an unwieldy lump of wood?

Never mind, Robert Duvall’s at hand to help the viewer quickly forget inconsistencies within seemingly faultless characters like Reacher. After all, the latter’s youth, set against the aged, grizzled toughness of former army man Cash (Duvall) shows many things.

First and foremost, the obvious. Would it not be incorrect to assume the invincibility of relative youth is consistent, alternately, with elderly endeavour proving an altogether different kind of survival instinct?

I digress, I suppose. Any such debate can be illustrated with this: by the final fight scene, Reacher is hurting badly, while Cash has only a grazed eye.

Is this because he’s tougher, or because he knows his limits? He’s doing his ‘damage’ to the enemy on the perimeter of the fight scene.  All the while, Reacher’s the fool taking the hits, in the centre of all the action.

Old are canny, young are reckless!

My enjoyment of this film was largely unqualified, yet my Dad had reservations.

Go figure, I enjoyed it!