In a new series of topical commentaries, Duncan Harley reflects on Life, the Universe and Everything. A sideways look at the world and its foibles. 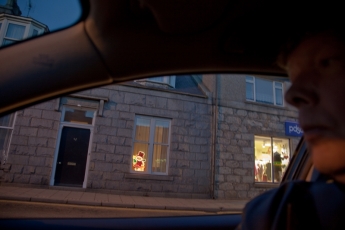 I see from today’s news that more than a quarter of motorists admit to texting while driving.

An amazing feat in my view, although I do have a son who can simultaneously text, watch television and play with his cat.

In fact, now that he has left home, I suspect that he may have added playing with his girlfriend to the list, but at least he is currently a non- driver.

I used to wonder about the erratic behaviour of other drivers, though. Was the car approaching on the continental side of the road driven by a Frenchman, or a drunk, or was there perhaps a hidden passenger crouched down where they could not be seen, performing some distracting sexual favour or other?

I rule out drug addicts since I was advised by a policeman some years ago that the driver without the required daily fix may actually be more dangerous behind the wheel than the one with a full dose.

The risks of texting cannot be denied, though. Driver inattention is the leading cause of accidents, according to insurers, and I don’t doubt it for one minute. I suspect that as cars get safer and simpler to drive, there is a temptation to trust the airbags and seat belts to save life and limb in the event of an unexpected situation.

But of course that is a selfish viewpoint, since the person you unintentionally run down may be a child crossing the road.

I see that Richard and Judy are back in the papers, selling books which neither of them have written. There’s some sort of buy one, get one for a pound deal. 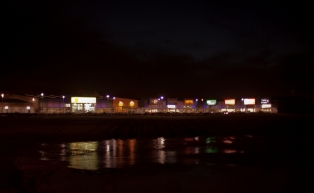 It reminds me of all those awful “Everything for a Pound” shops, with bendy garden trowels, loo roll you can stick your finger through and those loveable pink fluffy I-Phone covers.

What a month though!  I’ve had power cuts, some frost, and Gerry Anderson has left the planet. The flooded fields look quite pretty in the light from the local retail park.

Sales in the Sunset.

Many years ago these were the January Sales, but now we have the Desperation Sales.

Comet has of course crashed to earth but Halfords drives ever onward. These are the folk who told me to come back on a Saturday to have a bulb replaced, since they employ schoolchildren at weekends. They have small hands and are therefore much more adept at repairing cars.

Homebase is but a latter day Woolworths which seems quite lost and unsure what to sell. There’s also Argos: you can buy it and take it home, but you’re not allowed to see it first.

There’s also that strange shop with the intimidating picture of a policeman in the window, set against a pile of bog rolls and the slogan “bottom prices”. Home Bargains I think it’s called.

My local recycling centre has charted the relationship between the sales and the amount of stuff being chucked into skips. When the sales are on they put out extra skips.

On New Year’s Day, the Pound Shop was closed. I was reliably informed that they were planning a 50p sale the following morning. 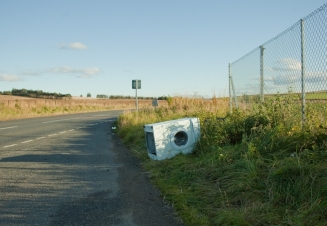 My local outlet has around 60 tons of stock, most of which doesn’t really work or is completely pointless.

I forgot to go back, but am tempted to e-mail the local council suggesting that they set out skips outside Pound Shop next year so as to save folk a trip to the recycling centre.

The quality of light is nice just now, though. Thanks Gerry for the trip and thank you Richard. I really admire you for appearing on daytime TV with your mum.