No matter how lurid were the stories of Gerry Rafferty’s personal demise in summer 2010’s tabloids, it was still shocking to hear that he had died on 4 January, aged only 63. His career is well-documented elsewhere. This is a fan’s view of his talent. 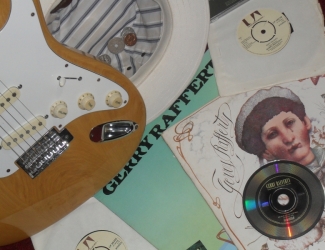 I first heard of The Humblebums in the late 1960s. They may even have appeared on one of the low-budget, dodgily-shot, poorly-recorded, grainy Scottish music TV shows of my youth. I may even have been attracted to them by the fact that the word ‘bum’ was in their name. I cannot remember. Neither can I recall anything about any performance I may have witnessed.

What did affect me though, was a friend’s copy of a record in what looked like a hand-painted sleeve, in the days when sleeves were constructed from stout cardboard, were a foot square and served well as temporary indoor hats, worn to display to fellow listeners your own excellent personal taste in listening choice. Maybe that was just me and my teenage trusties, come to think of it. I later discovered that the sleeve, credited to “Patrick” was the work of the scarily-gifted, all-round good guy John Byrne, Gerry’s enduring pal, commemorated in The Humblebums’ Patrick.

Can I Have My Money Back, on Transatlantic subsidiary Blue Thumb Records was to have made a star of young Rafferty. His material was the melodic bedrock on which The Humblebums’ live reputation was founded whilst Billy Connolly took care of the gags, in his unique, hilarious and anarchic way. Comparisons to Paul McCartney are no exaggeration when the title track, with its still-relevant lines

Listen to the lies of the politician man

Saying that we live in a democratic land
One land for the rich, another for the poor
And if you try to change it, they’ll nail you to the floor

is considered along with melodic tours de force, Mary Skeffington and Long Way Round and the subtle brashness of New Street Blues.

Can I Have My Money Back still sounds amazing today. The songs themselves are sublime, the arrangements precise and sympathetic and the delivery proof that young Rafferty had a supreme pop sensibility. Alas, this landmark release did not sell in the numbers it deserved to.

There was no other identifiable solo releases until City To City, which is not to dismiss the three Stealer’s Wheel efforts Stealer’s Wheel, (it included THAT single) Ferguslie Park and Right Or Wrong, but Transatlantic had the foresight – at least it seemed so to Rafferty addicts – to release Gerry’s Humblebums’ material in a variety of guises during the mid-70s. Anyone with an ear for melody could not fail to be moved by the wistful beauty of Her Father Didn’t Like Me Anyway, the resignation to fate of Rick Rack and the strolling funk of Steamboat Row.

When it was announced in 1977 that a first solo album for six years was to be released, I ordered the title track released on 45rpm single, from Aberdeen’s emporium of dreams The Other Record Shop. I asked for another brand new release to be popped in the bag with it. Were there ever two more incongruous purchases than City To City and The Sex Pistols’ Holidays In The Sun? That was VERY 1977.

There was greater success. Royalties from Baker Street and from Stuck In The Middle accompanying a cop lug-ectomy in Tarantino’s Reservoir Dogs, meant that Rafferty was able to live comfortably and securely until he bowed out this week.

In some ways, given his recent history, he wrote his own epitaph early on