Voice’s Old Susannah takes a look over the past week’s event’s in the ‘Deen and beyond. By Suzanne Kelly.

Tally Ho!  This past week has been an exciting one on several counts.  The fireworks were amazing – when Nick Clegg tried to handle Question Time in Parliament, the poor man could not open his mouth without the Opposition attacking him.  Sadly, his friend(s) must have been confused, because they jeered him just as much as Labour did.

The speaker tried to calm the explosive situation to little avail.  Alas, going down in history for being heckled by both sides is possibly not what Mr Clegg intended.  (I recall he was helping Kate Dean with her image; that doesn’t seem to have worked out as intended, either).

It’s almost as if breaking one or two election pledges is not doing the LibDems any favours.  If things get any worse for Clegg, he’ll have to ask Kate to give him some popularity pointers.

On Sunday I ran into someone from the Scottish SPCA; there had been reports of an injured seal near Torry Harbour.  The Scottish SPCA couldn’t find the seal, nor could I.

Still, if anyone comes across any animals in distress, do call the Scottish SPCA on 03000 999 999.  (The leaflet to combat dog fighting will be ready for distribution from Saturday, and anyone who wants to help give these out should get in touch with Aberdeen Voice).

There were delicious canapés at Malmaison, lots of delicious eats at Café 52, and BrewDog has some particularly gorgeous craft beers on tap.  Moreover, the Dog has re-released ‘Ghost Deer’ – a strong, amazing beer in brilliant packaging. Perhaps I’m drawn to the Deer-themed artwork for some inexplicable reason.

I’m told a t-shirt will be produced soon; it seems a chief BrewDog artist works in the Aberdeen BrewDog bar – do check out the shirts on offer; they are a good example of locally-created, wearable artwork.

This Friday night I look forward to some pampering at Lush, and then heading to the Masked Ball in Union Terrace Gardens.  It sounds like a very creative and elegant affair, and the Balmoral Group organisers are holding this event in aid of Friends of Anchor.  This charity seeks to buy equipment and improve things at the ARI for cancer patients; a most worthy cause.  Pictures to follow. 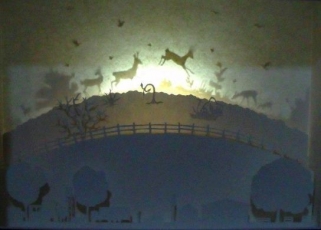 Also this week artist Nicky Cairney got in touch to share some haunting artwork on the theme of Tullos Hill; she found the Hill’s story very moving and inspired this artwork.  More of her work can be found at www.nickycairney.co.uk.

I am sure that despite the rocky ground, visible waste everywhere, ploughed up gorse, resultant smaller wildlife numbers, dead deer and a fraction of the 89,000 trees planted, this great project alone will help our eventual city of culture bid.

Perhaps the Turners and Constables of the future will flock to the hill to paint pictures of rusty metal and tainted earth.

Limousine Bull is re-grouping.  If you weren’t aware, this art resource was forced to leave its premises in Torry a few months back over a funding crisis – a crisis that any one of our great and good self-proclaimed patrons of the arts or culture-loving former city administration could have stepped in and solved for a four-figure sum.

I guess they had more important things to fund instead of supporting a gallery space, a teaching space, and affordable studios for up-and-coming artists in Aberdeen to work in, which brought people to Torry, and brought artists together.  After all, we have to prove we’re a city of culture.

Closer to home, despite non-stop editorialising in the City Garden Project Press, aka ‘The Aberdeen Press & Journal’, Labour are sticking to their election pledge and aren’t going to build the web.

Never a news organ to let beautiful artwork sit idle, the P&J have trotted out the luridly coloured concept drawings from the doomed CGP several times this week.  (I really must start forcing myself to look at all the old P&Js, and seeing if there has been a single issue over the past 2 years which didn’t have a web story on the first few pages – but I just can’t bear the thought of it).

Granite web supporters (i.e. Scottish Enterprise and its sprog ‘Visit Scotland’, ACSEF, and the construction industry) would have you believe that the web should still be the salvation of Aberdeen and the reason no one wants to lead our city of culture bid is that we didn’t turn our only city centre green space into a granite-clad spaghetti junction and we didn’t mulch our ancient trees.

What kind of youth culture exactly is going on here?

Should we be the City of Culture?  While I did address this with a definition a while ago, it seems timely to do it again.   As people try to make a living in the Arts in Aberdeen with or without government support (such as Limousine Bull), let’s take another look at the great expense – sorry – benefits of becoming a City of Culture..

Youth Culture: (compound noun; English) A given collection of style, behavioural, ideological characteristics shared by a given group of young adults.

Well, we do have youth culture in Aberdeen, and not just the long-running international youth festival.  During Bonfire events, a group of young people in Seaton decided to throw burning pieces of wood at fire-fighters, and shoot fireworks in the firemen’s directions.  A group of young people assaulted two men as well.  What kind of youth culture exactly is going on here?

I think the problem lies in there not being a granite web.  You build your web, create 6,500 jobs, and then there will be no further problems.

Skateboarding, graffiti, hanging around smoking  and underage drinking can all be centralised in the web, perhaps in a ‘youth culture zone’.  This will please everyone who insists Union Terrace Gardens are filled with old drunks and druggies – we’ll get in a better class of sub-culture.  Younger drunks.  This indeed will help our city of culture bid.

Perhaps these violent outbursts are because we have too many affordable, exciting things for young people to do, too many arts and music programmes, too many places for them to socialise and have fun.  I think there is room for further cuts to library opening hours, music tuition, art and craft provision and so on.

City of Culture: (compound noun, English)  A European designation given to a city for one year; the city is meant to then put out a varied programme of performing and visual arts.

Right, we are all agreed (apparently) – we want to bid for and win the coveted (?) City of Culture title.  As described in Old Susannah No. 82, this might mean spending a few million here and there on things like giant spiders (nice fit with the web) which Liverpool spent £2 million on.  It will definitely mean building lots of new structures!  Result!

The unhappy millionaire builders we have locally will get to give us more ground breaking (probably greenbelt breaking) glass box buildings, malls and parking spaces.

Of course we have lots of buildings in the public and private sectors which we could put back into use (via tax incentives, improvement notices, discount rents to arts groups and social projects), but there’s little in it on the building front, and that’s what the City of Culture is all about – building new stuff.

Since the City of Culture bid for Aberdeen is being linked to the web, it is in the news nearly as much as those lovely drawings of the flower-covered, sunny web design.  It is prompting much discussion and speculation.

A friend of mine asked me:

“why can’t we just have lots of events like we do anyway, and give more support to our local up-and-coming artists without spending money on the City of Culture Bid?”

I guess some people just can’t grasp the concept.

Unexpected: (adjective) An event or result which could not have reasonably been projected or forseen.

Here’s a coincidence for you.  Liverpool spent millions on its 2008 bid to successfully become the City of Culture.  Then there was a little coincidence in 2009, totally unrelated to this wonderful honour.

According to the Liverpool Echo newspaper of 29 December 2009:-

“They have also put forward the closure of the Park Road swimming baths in Toxteth and cutting culture funding by £400,000.

“The options have been put forward by officers as they try to plug an unexpected £11m gap in next year’s budget.”

I suppose you couldn’t have expected that spending £2,000,000 on a giant spider, and spending  hundreds of thousands of pounds on the culture bid, and unknown quantities on management companies, events, building projects and so on in 2008 could have led to any financial hardships in 2009.  Who could have seen that coming??

The City of Culture was supposed to make everyone rich after all.  This promise of wealth has a bit of a familiar ring to it; I’m sure I’ve heard about some project somewhere in Aberdeen like that.

Old Susannah must write to Liverpool and ask them if they use the services of PriceWaterhouse Cooper when they make their financial forecasts.

Synthetic: (Adjective) something which has been artificially fabricated, as opposed to something that naturally grows.

Whether or not we get the City of Culture award, we can be glad we’re in a city which nurtures local talent, allows creative movements to grow, and encourages experimentation within the arts to occur organically.

Sure, there may not be any money for school music, arts programmes like Limousine Bull are being allowed to die, and talented fashion designers and video artists (like the unique Fraser Denholm) are leaving the city at an alarming pace to live and work elsewhere (heaven knows why they head to London and Glasgow).

Furthermore, the more cynical are asking whether no one wanted to take on the role of City of Culture director because we don’t retain our talent, because we don’t support the artists we do have enough, because we kicked Peacock in the teeth, because we don’t encourage children to take up art and music in school to a greater degree, and because there is no natural flowering of art in all the unused shops we have – which other cities manage to rent to artists on affordable bases.

No – the reason no one wanted the job is because we didn’t build the web.

But more importantly, we’ve got a couple of city council suits who are helping to sort our culture out.

In case you doubt Aberdeen City’s and ACSEF’s abilities to create awe-inspiring artwork and prose, here is a little something to keep you going until next week:   http://www.aberdeencity.gov.uk/nmsruntime/saveasdialog.asp?lID=38444&sID=14302

As you can appreciate, if you just let things happen, you wind up with places like Notting Hill Gate, Brick Lane and so on – areas that are a bit edgy and filled with unwashed artist and musician types.  Down with that sort of thing.  Remember to know what quarter of the city you’re in, and be glad someone more creative than you or I thought to slap labels on them.

Next week:  No quarter.

11 Responses to “Old Susannah No. 102: Culture, Vultures And Liverpool”