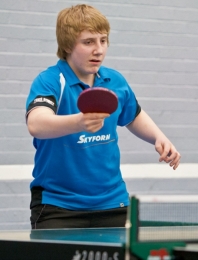 Neil, 15, who is a member of the Aberdeen Sports Village Table Tennis Academy, and was competing at this level for this first time, won gold convincingly in the under 18 event.

Neil also triumphed in Band C of the senior event, and is already setting his sights higher.

“The target for Neil now is to compete in Band A, the top 12 level in the UK. Although he is a bit away from this yet, his continued attendance at the Academy sessions will hopefully get him working towards this.”

Neil, who only recently took up the sport, continues to train with Westhill Table Tennis Club, and competes for them in the local league.

The Aberdeen Sports Village Table Tennis Academy was launched in December 2010, and gives young stars the unrivalled opportunity to train in world class facilities while receiving expert coaching to help them further develop in their sport. Combined with the Aberdeen Sports Village’s Table Tennis Club, it provides the perfect feeder system for young talented athletes.