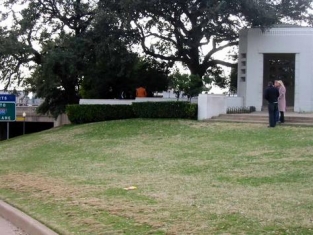 As this week includes November 22nd I was waiting in the office for the hardy annual question “Where were you when Kennedy was shot”, with the resigned air of someone waiting for the other shoe to drop. This year we reached 10.55 before the office bairn, who was born 30 years after the event, asked the question looking pointedly at me – the only person in sight who might be able to answer this.

Luckily I had an alibi – I was at home in Mastrick watching Thunderbirds and eating fish and chips for tea with my family at home – according to my mother.  Allegedly.

Leaving aside this annual foray into cultural imperialism, (how come no-one ever asks where were you when Anwar Sadat or Olaf Palme were killed?) I have to say that the date of November 22nd became something of an epiphany in my life when our English class at Aberdeen College of Commerce on 22nd November 1970 was asked to write an essay entitled ‘Where I Was When John F. Kennedy Was Killed’.

Being of a flippant, frivolous and sardonic nature I decided to exercise my sense of humour on the subject. I stated that although being only twelve in 1963 my family had actually been on holiday in Dallas at the time staying with a fictitious Uncle Jim and Auntie Jean. I went on to tell of borrowing Uncle’s old Manlicher Carcano rifle (which he had brought back from Italy in 1944), and deciding to go shooting tin cans without telling anyone.

After having been moved on by several irate families of picnickers, who seemed to object to wayward 6.25mm rounds whistling through their barbecues, I eventually found a quiet wall on top of a grassy knoll where I set up my tin cans and began shooting.

Imagine my dismay then when, after only two or three shots, I heard an uproar from the other side of the wall.

“Oh God”, I thought, “another barbecue screwed, another family vowing Death and Destruction”, and quickly made myself scarce.

I duly handed in the essay, smirking with self-satisfaction, and entered the English room on the 6th floor the following day with a certain sense of anticipation. This pleasant mood was quickly exploded when Mr T, the English lecturer, proceeded to give me a right royal rocketing, during which my antecedents, birth, present attitude and future career were all consigned to join the onions on the compost heap of history.

Obviously something of a JFK fan (we hadn’t found out he was rogering Marilyn Monroe or had kicked off Vietnam at that point) Mr T lectured me on lack of human feelings, lack of respect for a deceased head of state, my attitude, presumption, complacency etc. etc. In short, Mrs Watt’s little boy was given some serious amounts of grief.

Although this was a bit disconcerting to the gauche nineteen year old under the cosh at the time, it did provide a valuable insight, which has been borne home to me again and again in the intervening years since.

This lesson is, of course: There Are A Lot of Po Faced Bastards In The World.