Old Susannah’s fighting a nasty little digestive problem at the moment – but I’m more worried about the rioting that may soon hit Aberdeenshire.  I thought rioting had already broken out when I was making my way home on Friday night through town, but then I realised it was just the usual weekend crew and all was business as usual.

It’s just as well our highly-placed police officials have announced that crime levels are going down in the ‘deen, otherwise the recent spate of attacks and assaults would have me worried.

I am assured there is no correlation between any high-ranking police performance bonuses and the crime stats decreasing.  As we know, statistics are facts which can never be manipulated.  As for the average policeman on the beat, I am sure they will happily swallow the proposed cuts to their wages with good grace.

Looks like there might be a one-man riot in the Menie area; for some reason the Government is not doing what Donald Trump wants at the moment, and might actually allow a giant windfarm to obscure his view.

This windfarm could mean double-trouble.  Not only might all the rich people lined up to buy the 900  holiday homes now change their minds if it means looking at wind turbines, but any change in the wind might make someone’s hair (or wig) look funny.  More on that later, but I hope the government will see sense.

(By the way, I think windfarms have a long way to develop and I am not completely sure we are proceeding in the right manner.  But at least they are an attempt to solve our energy problems.  Whereas I think Donald’s development is obviously proceeding in the right manner, and will solve all of our employment and economic problems.  Then again, I am heavily medicated at present).

Time for some more medicine and some definitions.

(modern English phrase) to be in profit; origin of this phrase from accountancy standard practice of recording positive figures in black ink and negatives in red ink.

Aberdeen City Council may be millions in the red (with more debt to consultants piling up by the minute), but at least we are well in the black when it comes to carbon. The city produces an eye-watering quantity of the black stuff – here are some figures from an old City report: (insert picture here- table of carbon figures) 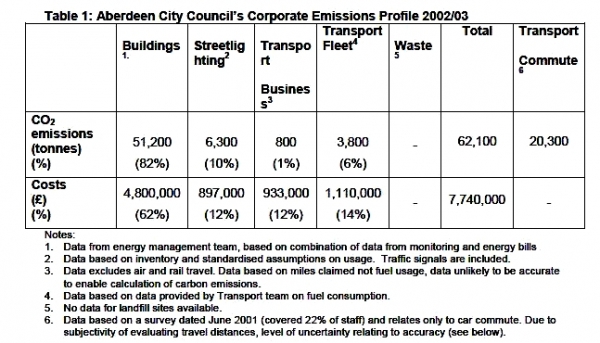 So looking at this table, as a guess in 2004, staff survey figures indicated that some 22% of staff answering the survey said their car commute to work produced some 20,300 tonnes of carbon in 2002/03.  I’m told we’re doing a bang-up job of reducing carbon production now.

Back in the day when the ‘tree for every citizen’ plan was new, Mr Lochhead of  the Scottish Government and Aileen Malone were quoted in a lovely, warm Aberdeen press release.  Here are some of the great things it said:-

“Many of the woodlands being created will be in the middle of communities – in one case right underneath a tower block – so they will provide a focal point for community involvement, leisure and recreation”. “They will also soften the urban environment and – by soaking up around 15,000 tonnes of CO2 over 50 years – help provide a greener, cleaner future for the people of Aberdeen.”

I can almost see the forest under the tower block now.

If the press release was referring to the one in Balnagask, I think they’ll find the trees were largely vandalised.   I can’t think of any crime, vandalism or fire risks associated with a woodland right under a tower block, so let’s move on.

Back to the carbon question.  Wow! –  Fifteen thousand tonnes of carbon sucked up by the 94,000 trees in only 50 years.

Or, looked at another way, if all the trees mature, then each year they would suck up around 0.2% of that pollution each year.  Shall I throw away my asthma inhaler now, or wait? (NB – I never had asthma until I moved to Torry.  I sometimes wonder if there are any pollutants in the sweet-smelling air, but I swiftly dismiss such thoughts as I cough on exhaust fumes on UnWellington Road).

This is almost enough to make me change my mind about killing – sorry ‘managing’ – the deer to plant HoMalone’s trees.  But not quite.

If you are out there Ms Malone, please be assured that I am thinking of you – and so are some ten thousand voters.  Go ahead and try killing the deer.  Just start hitting the ‘help wanted’ section if you continue to press on.  C’mon Aileen – time is wasting, call off your dogs.  And hunters/cullers/’managers’. If you want suggestions as to where to put the trees, several readers have written to me, and I would gladly pass their (uncensored) comments on.

Before I leave the subject of how our fearless, pioneering City officials are dealing with carbon pollution, two last thoughts.  I asked this question of several environment agencies and the council – and none would answer it:

“When the Loirston Loch stadium is in operation, will there be more, less, or the same amount of air pollution and particulates in the area as there are now?”

That’s right – no one would commit to an answer.  Too difficult to guess, as all those trees (if not burnt to the ground) will be sucking up so much area carbon. I’m sure that the lack of straightforward answers had nothing political about it at all. The last thoughts contained in the City’s 2002/03 report are kind of scary ones unless you are a fan of the Big Brother school of government.

Council staff take heart – your computers will be ‘monitored’.  Of course there are ways to print documents without having to monitor staff, but staff won’t mind shedding a few privacy rights for the privilege of improving the highly-scientific carbon stats.  Private homeowners – get ready to jump through future hoops if you want to renovate your home.   Rest assured in the knowledge it’s all for the best.

Put the wind up

Unfortunately, someone’s put the wind up Donald Trump. Instead of the usual hot air billowing out from the blowhole of this huge Moby Dick, he’s got aesthetic worries.

No, not about his hair or the one or two wrinkles around his eyes – but someone has the temerity to think about spoiling his view from the Menie Estate. If anyone knows about aesthetics it is the creator of Trump Tower, with its giant brassy-gold letter ‘Ts’ in the lobby and its shiny pink marble cladding – not to mention the gold-plating on the Trump jet.  Money can buy class.

Menie wrongs.  Donald is against wind power, you see, and a windfarm may go up near his estate.

Well, The Donald will not take that lying down (although a good long lie down might do him good). He’s threatening to take all legal action he can.   This apparently includes taking whatever Scottish entity he sees fit to an American court.

Does the Don do this kind of thing often?  Yes he does.

Are any of his lawsuits frivolous means of attempting to intimidate (legally and financially) those he sues?  Obviously not. Do rest assured contractors and municipal governments – Donald Trump hardly ever sues your ilk, and doesn’t always win when he does.  Don’t let that thought get the wind up you, now.  You might wind up in court, but you have the gratitude of the electorate which you have earned, and you will get what you have earned from them.

(modern English) to accidentally say something that is not completely accurate.  To be ‘economical with the actuality’.  Definitely not to lie.

Donald where’s your troosers?  Mr Trump was – believe it or not- caught in one or two ‘mis-statement’s in interviews in the past.  Come to think of it that is an understatement of mis-statements.  How such a privacy-loving man manages to get caught up in so much publicity is a mystery.

One of these factually-challenged statements concerned his Rancho Palos Verdes, California golf course; he said he was building 75 mansions on it.  In fact, six were built and three sold as of latest news reports.  I make that kind of mistake all the time; I can never remember if I have one flat in Torry, or 86.  Obviously the 900 homes he is building in Menie are all going ahead and will all be sold.

The two events are unrelated.  Aberdeenshire, RGU, Alex ‘fishy’ Salmond and a host of others believe in Trump.  That should be good enough for you and me. It’s not as if he’ll sell the land off now that the planning permission is in place – nothing short of creating the ‘world’s greatest golf course’ will do, and he won’t rest until he’s done it. I for one have complete faith in the intellectual prowess and ethics of our local government when it ensures my environment is protected and all land deals and planning consent matters are handled above board.

Question:  Who will be playing on this course?

If it costs you at present over $695 a year to play golf at Trump’s LA course for only $160 a go, then I foresee a problem.  If you introduce such a low rate here in Scotland, then every oil exec will be skiving off work to spend all their time playing around.  Nothing will ever get done, and the greens will be crowded day and night.  See you there!  (When it’s finished).

I will keep an eye open on the flat-swapping sites to see if anyone will trade their new Menie home for my Torry Flat.  Or maybe not – I would far rather stay in Torry.

For some fine examples of the word ‘mis-statement’ in use, the following link will be of interest:  http://www.businessinsider.com/donald-trump-eliot-spitzer-lawsuit-video-2011-4

Sometimes I wonder if the doings in Aberdeen aren’t what’s giving me a stomach ache.  But for now, back to bed for me, and at least I sleep sounder than some of our officials do – or should do anyway.

Next week:  A deer update from the City which begs for the word ‘disingenuous’ to be defined.