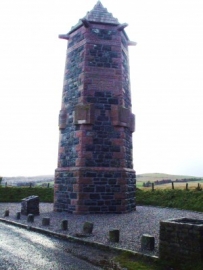 Where will you be in July? I hope to be at the Harlaw Monument on Sunday, 24 July 2011, to recall the 600th anniversary of one of Scotland’s more important encounters.
Essentially the battle was a contest between a Macdonald and a Stewart over an earldom far away from each. The day-long battle was fought two miles west of Inverurie, somewhere north-west from the monument. Yet the way in which Harlaw altered Scotland’s cultural imprint is recognisable to this day.

As a battle however, Harlaw was indecisive. Both sides fought each other to a standstill, bloody and unbowed, and each claimed victory. But under cover of darkness on that warm July evening six centuries ago, both sides retreated.

“Reid Harlaw” and “the sair field o Harlaw” are thoroughly represented in ballad, song, story and legend. Good modern accounts are contained in such books as Peter Marren’s Grampian Battlefields and Raymond Campbell Paterson’s The Lords of the Isles. Lt-General Sir Peter Graham, one-time CO of the Gordons and latterly GOC Scotland, gives a splendid presentation from a military standpoint, describing the forces and the terrain, measuring their qualities, and relating how the command structures might have operated.

The impression Sir Peter conveys is of a hand-to-hand battle that became increasingly desperate as the day wore, on, each side becoming more and more tired, each increasingly weary army hurling bodies at the other, looking for the tiniest advantage to turn the tide. Finally, with one final heave, the forces of one caused the other to step back. But the apparent victors no longer possessed the strength either to deliver the killer blow, or to undertake wholesale pursuit.

The prize of the earldom of Ross created the battle, and in the struggle over power and land, Donald, Lord of the Isles and Alexander Stewart, Earl of Mar, emerged as champions of each side. Whoever controlled Ross, territory stretching from Inverness to Skye, controlled northern Scotland, and held a considerable key in manipulating the rest of Scotland down to the Tay.

On one side was Alexander Stewart, thuggish son of the highly unpleasant Wolf of Badenoch, who gained the earldom of Mar through the murder of the incumbent earl, then forcibly marrying his widow. On the other was Donald, 2nd Lord of the Isles, head of what was a maritime kingdom almost in its own right, and whose forces had by now entered the lands of Ross.

If the intended conquest of Ross was to be made secure, then Donald would have to take out Mar’s forces by a pre-emptive strike. Thus did Harlaw occur.

Ensuing centuries create a David-and-Goliath picture – the chivalrous Stewart, noble Earl of Mar, against the wicked Donald of the Isles. Mar is aided only by minor levies from Aberdeenshire, the Mearns and Angus plus gallant burghers of Aberdeen under Provost Robert Davidson, while the scheming Donald heads 10,000 rapacious caterans. A spin-doctoral touch ensures that the event goes down in history as Highlander versus Lowlander.

the actuality is that he headed some three dozen merchants anxious to protect their business investments.

A glance at the cultural composition of the armies indicates that beyond a small professional core in each, both sides were made up of loons and callants whose commitment to campaign did not extend beyond getting the harvest in. The actual battle possessed neither subtlety nor tactics, with military strategy such as it was confined to a series of heroic encounters.

If the event was portrayed as “Highlander against Lowlander”, then it was mis-cast in the same way as the Jacobite Risings are. There were folk of each persuasion on each side. Mar’s army would have contained a plethora of Gaelic speakers, while the educated in Donald’s forces would have spoken the same languages as Mar’s chief officers.

Among the casualties were Hector Maclean of Duart, Sir Alexander Irvine of Drum and Provost Davidson of Aberdeen. Davidson’s name is the product of more legend. Legend has it that he rode out from Aberdeen heading “a citizen army”; the actuality is that he headed some three dozen merchants anxious to protect their business investments.

The inscription carved by the architect Dr William Kelly on the Harlaw monument refers to “…Davidson and the [36] Burgesses of Aberdeen who fell [at Harlaw]….”. In the great hall of Trinity Hall in Aberdeen are displayed the remains of two banners said to have been carried by members of the Weavers at Harlaw, along with the provost’s sword.

Under his direction, a relic of Harlaw survives to this day

Yet it’s worth asking the question: what would have happened if the pyrrhic victory of the Lord of the Isles had been transformed into actual conquest? What would have been achieved by Highlanders rampaging south from Aberdeen to the Tay? How much of today’s lost Celtic culture would have been restored? And how?

Any answer would have depended on Donald’s Highlanders and Islesmen becoming true regular soldiers, enforcing a conquest, using their talents as an army of occupation to rebuild the countryside in the mould they envisaged, and where Gaelic displaced Scots as the lingua franca. Compare the picture as occurred under the Allies in post-war Europe, and where history has been written by the victors.

Instead, the withdrawal of Donald’s influence in central and eastern Scotland began the gnawing at the strength of the Lordship of the Isles and the natural authority exerted through the clan system. Slowly the wane of each began. The Lordship of the Isles was forfeited in 1493, with the title surviving to be borne by the eldest son of the monarch, as Prince Charles holds now. In Harlaw began the inexorable downfall of the clan system that was dealt a mortal blow at Culloden three centuries later.

Meanwhile, post-Harlaw Aberdeen reacted swiftly to prevent the city ever being threatened again. In 1412, the safekeeping of the town was placed in the hands of……Alexander Stewart, Earl of Mar, who for the next 23 years became Captain and Governor of Aberdeen. Under his direction, a relic of Harlaw survives to this day, for his magistrates quartered the city into municipal wards. From these first four divisions came the electoral wards of today. Harlaw today lives on in balladry, pipe tunes, street names, a school, a room in Aberdeen Town House and as the monicker of a council works depot.

his body was borne back to Aberdeen to be given an hon­oured burial in the Kirk of St Nicholas.

Harlaw changed for ever the cultural and linguistic face of Scotland. It showed that the power of the Lordship of the Isles was no longer invincible; it proved the start of the end for the clan system; and it gave impetus for the Scots and English languages to prosper at the expense of Gaelic.

Who was Robert Davidson?

Robert Davidson has become something of a cult figure down the years, the only civic head of Aberdeen ever to lead the citizenry into battle, and who six centuries after his death is still revered as a hero.

Yet what do we really know of him? Flora Davidson and Nick Hide, researchers to Clan Davidson, state firmly that he was “a wealthy merchant, an innkeeper, wine importer, customs inspector, provost and pirate”, going on to point out that after the dreadful confrontation, his body was borne back to Aberdeen to be given an honoured burial in the Kirk of St Nicholas.

But there remain puzzles about Davidson the man. His colourful career carries respectability as a merchant, but hardly to the level where he would merit a knighthood. Yet on the ceiling of the St Nicholas Room in the Town House of Aberdeen, he is portrayed as “Sir R Davidson”, with a coat-of-arms best described as putative rather than actually belonging to him.

So where is proof of Davidson’s greatness? My guess is that the answer lies in two points: the first is that he was interred in the Mither Kirk, a resting place reserved only for our most revered citizens. The second is that folk memory, a powerful tool in history, maintains a legend that would be very difficult to disprove.

The bottom line is: why would we want to disprove it anyway? What a magnificent story to relate down the centuries – how a hero provost placed himself at the head of an armed contingent and gave his life in defence of the town he led and loved. Here is a role model readied to be copied by anyone today.