For thousands of years the world’s great civilisations have understood the importance of libraries:  storehouses of knowledge, exchanges for ideas and philosophies and essential developing technologies, social centres, and sources of inspiration. However, as Voice’s Suzanne Kelly reports,  our libraries may yet again be facing the threat of cuts and closures. 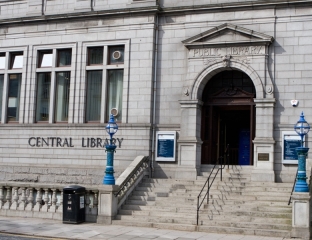 The great library at Alexandria housed the factual and philosophical literatures of all the cultures of the times. There is historical evidence to suggest that any ship docking in the Alexandrian port had to declare the books it had aboard, and any that the Alexandrian library did not have were ”borrowed”, copied and translated, and the original returned to the ship in due course.

The importance of storing and sharing knowledge in various languages was paramount in the Classical world.  It was a major loss to civilisation when this great library was burnt, but the concept of libraries was entrenched in civilisation, and the storage and sharing of knowledge has been central to all of mankind’s great advances.

The great European libraries, including the world-famous British Library are looked upon with pride and respect by scholars, researchers, writers, and those who seek both knowledge and entertainment.  However, this view of the library’s importance is under threat throughout Europe, as governments look for soft targets for budget cuts.

Library hours have been cut, book buying budgets slashed, and library buildings – some of which are of considerable historical and architectural value – are being converted to other use or even destroyed in the pursuit of valuable development real estate.  Books are often sold to raise funds and swept aside to make space for newer media, unfortunately this has meant important collections being split up or sent to storage.

Elaine Fulton, Director of CILIP in Scotland:
“Contrary to what is widely reported in the press, Scottish libraries are not experiencing a decline in demand for services. In fact, the past two years have seen the number of visits to our public libraries rise by 2.4 million. This is a clear indication of the support that exists for libraries and the value that people place on our services within communities across Scotland.”

Along with the out-and-out direct attacks on libraries, the insidious attacks are just as damaging.  Libraries have quite rightly branched out into lending music and DVDs, and the advent of Internet access available to all via library computers is likewise welcome.

But rather than expanding the importance and diversity of the library, many local governments are deciding that books and other printed works are of secondary importance. An offer Councils frequently make is that libraries can stay open if non-professional ‘volunteers’ are willing to staff them. As a professional librarian would tell you, there is more to running a library than just putting books on shelves.

The management of vast stocks of printed works, the ability to find information quickly and efficiently, the understanding of the cataloguing numerical system, and best practice are but a few issues which need professional attention.

Some years back Aberdeen City ordered its library services to cut £100,000 out of its budget, from any area it chose

A volunteer staff could not be expected to show the same commitment to professional development, and would doubtless fall short of offering the reliable, consistent service that library users are accustomed to. Furthermore, there are perhaps risks associated with the limited accountability of volunteers – the worst case scenario is that this could give rise to stock depletion, whether through mismanagement, under valuation and subsequent disposal or even theft.

It is emerging that a museum in Glasgow has suffered numerous thefts over the years, which are only now coming to light, largely due to low staffing levels and poor stock management. In fact the British Library itself was the victim of vandalising theft:  a library user was removing extremely valuable pages from ancient books and whole books in some cases – removing knowledge from common access, and destroying volumes of books in the process. If professional librarians had not been operational, who knows how long this could have gone on and how much more damage would have been done.

Alan Reid, President of CILIP in Scotland:
“All support for libraries and recognition of the need for professional and well trained staff is welcome. It highlights the passion which many in Scotland share for their libraries and the rising tide of concern at what the current public service financial cuts will mean. I am sure there will be many more protests of this nature in the next few months.”

Some years back Aberdeen City ordered its library services to cut £100,000 out of its budget, from any area it chose.

Rather than losing jobs or cutting down the annual book budget, opening hours were cut. This had an immediate detrimental effect on resource availability for the elderly, children, people who do not have English as a first language, students, and young people with either family or financial issues who depended on the libraries for so very much more than books.

Any of the options open to the library services would have been detrimental, but there was no choice than to make this cut.  This Aberdeen City Council has spent millions on consultants in the past, and has written off millions of pounds in bad debts. Surely funding services such as libraries should be seen as both possible and desirable.

There are countries which deny their citizens this important asset, and people who would desperately love to have libraries

On Saturday 5th February I visited Aberdeen’s Central Library. I was trying to research ‘Urban Sprawl’, a topic for which many associated books, articles and pamphlets have been written by scientists and EU officials. Our library had nothing.   However, the librarian’s assistance was invaluable, and it is planned to get some items in on the subject – budget allowing.

One of the benefits of being in the library was the physical access to the collection:  it was possible to spend an hour or so wandering the well categorised shelves, and finding titles that were of interest to me which otherwise I might never have known existed. I also found information on community events that I hadn’t known of, posted on a bulletin board.

I had no sooner left the library than I ran into a group of pro-library protesters belonging to  ‘Cilips’ – the Chartered Institute of Library and Information Professionals in Scotland.  As their leaflet and their spokeswoman explained:

“Not only do libraries make a valuable contribution to our society, they stand for important values in our society including intellectual freedom, equality of opportunity, engaged citizenship, informed democracy and a society in which people have the chance to achieve their potential.”

There are countries which deny their citizens this important asset, and people who would desperately love to have libraries.  Let’s ensure they are not taken for granted or worse, taken down.  It is an amazing arrogance on the part of the budget-cutters to think they know better than all of the past societies and conclude that libraries are a luxury.

Let’s not let them get away with closing our libraries.

No Responses to “Libraries Under Threat Of Cuts And Closures”