Peacock Visual Arts is hosting two exhibitions at present; Aberdeen Voice was on hand for the opening on 14th January of “Menie:  a portrait of a North-East coastal community in conflict” photographic portraits by Alicia Bruce. 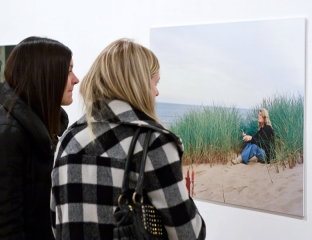 To describe in simple terms the method of working used to create the images in this show, Alicia Bruce takes iconic painted portraits from art history and re-creates them.
In this instance she spent time with the inhabitants of Menie who have lived under the threat of being displaced by the Trump golf development.

As she acknowledges, she is neither the first nor the only photographer to use past art as source material for recreations, but as an essay on the exhibition by Catriona McAra explains (and as the work demonstrates) Bruce stamps something personal and clearly reflective of Scotland on her portraits.  The subjects have lived with the stress caused by the Trump development for quite some time, and their faces reflect this in varying degrees.  All of the subjects have several characteristics in common which Bruce successfully catches – different kinds of strength and earnestness.

There is strength and defiance wonderfully captured in the powerful re-creation of the iconic Grant Wood ‘American Gothic’ painting.  In this reworking featuring Michael and Sheila Forbes, Michael’s folded, tattooed arms block the would-be adversary from taking the land and farm he stands before, confrontationally facing an invisible Donald Trump, and the gallery viewer is put in Trump’s place, staring in Forbes’ eyes.  When the Voice team arrived early at the show, this piece was the first thing we could see as we peered through the gallery doors – powerful, immediately both familiar and new and it made a bold statement of strength that is still fresh in my memory.

The striking desolate beauty of the Menie Landscape is ever present in the photographs, and,  like the lost ways of life the original paintings captured, the viewer is left wondering if these portraits are capturing a people and environment doomed to soon be lost themselves like the art they are re-creating.  It is this idea that takes the photo of Molly with a gaggle of geese and changes it from a whimsical re-creation of a happier time but instead something poignant.

The show was well attended, and feelings inside the gallery ran high.  Molly Forbes said she was ‘most pleased’ with the work; she seemed somewhat overwhelmed and genuinely impressed.  Comments given to the Voice and other media present were all powerful; Gordon Maloney had this to say:

“At its heart, this is not a question of what benefit this development could bring to the North East, although it’s very questionable that it would bring any. The question here is how much are we willing to sacrifice for economic gain. Do we want to live in a world where people are evicted from their homes and unique and beautiful stretches of land are ripped up to make way for hotels for rich tourists? I don’t. That’s why it is crucial to show the human side of this story; we can never forget that these are people’s lives, not just what economists derisively call ‘externalities’“.

Along with the Bruce portraits, the back of the gallery area had been used for a projection of the grey north sea waters.  Bruce also created a series of shots of boundary markers, taken at different points in time.  Near a visitors’ signing book there was a small collection in a simple frame of cards that had been sent in support to the Menie residents.  Perhaps the most poignant and heartfelt message can be found on a Christmas card sent to Molly Forbes.

My recommendation is to go to this exhibit and think about what will happen to these people and their world. 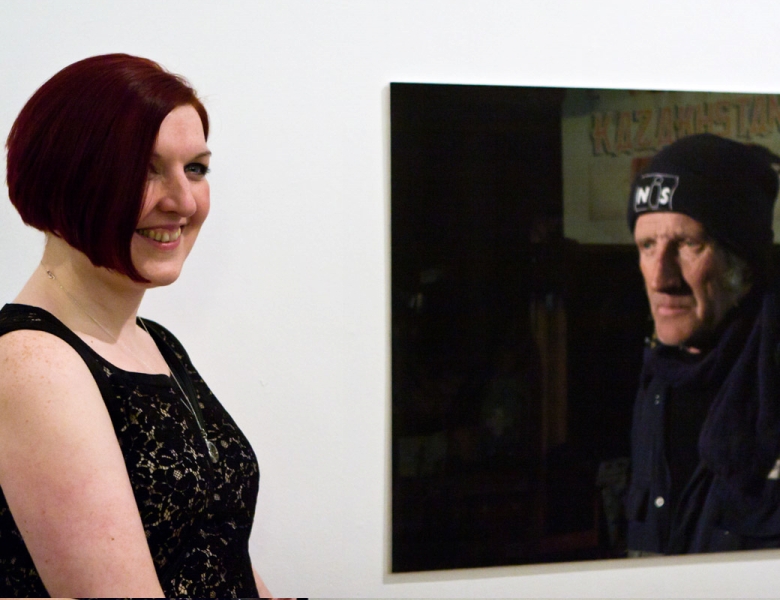