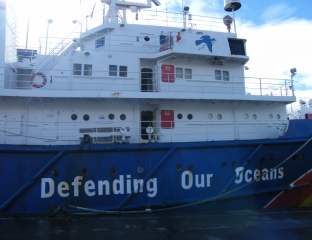 The Greenpeace ship the Esperanza currently on its ‘Go Beyond Oil’ Tour aims to “investigate, expose and confront environmental abuse by governments and corporations”(1) and raise awareness about the potential hazards of deepwater drilling, drilling in the Arctic and oil extraction from the Canadian Tar Sands.

The vessel had come to Aberdeen directly from an action against Edinburgh-based Company Cairn Energy in an Arctic region near Greenland known as ‘Iceberg Alley‘, where the company had been drilling two deepwater exploration wells at a depth of 300 to 500 metres (around 300 metres and above usually constitutes deepwater drilling).

Governments and citizens around the world have become very wary of deepwater drilling since the recent BP disaster but Cairn Energy claim they have “put procedures in place to give the highest possible priority to safety and environmental protection,”(2).However, a sceptical Greenpeace highlights that, “if a spill (were to occur) in this harsh and unpredictable Arctic environment the consequences would likely be disastrous. Little to no capacity exists to handle accidents in ice-filled seas. The techniques deployed in the Gulf which were fraught with failure would be useless in the Arctic.

Cold weather, thick ice cover and the slow development of plants and animals means that multiple generations of organisms would be exposed to contamination since the toxic oil would linger in the environment. Even without a major spill, the regular ongoing industry practices of exploration, seismic testing, and extraction of offshore oil reserves has the potential to disrupt seasonal migrations of whales, spawning run of salmon, and crucial reproductive periods of migrating birds”.(1)

First, they occupied the anchor chain and erected a ‘survival pod’ to stop the ship leaving the harbour

Greenpeace activists expressed their concerns about the Arctic project by climbing and occupying the company’s Stena Don oil rig effectively shutting it down, but after 40 hours extreme weather forced the protestors to abandon the action and give themselves up.

They were subsequently arrested, fined roughly $3,440(3) each and deported to their home countries. In the days after the departure of the Esperanza from the area, Cairn Energy announced it had found oil and that it was testing the first samples. The news delighted industry investors and many in Greenland.

Next, the ship travelled to the Shetland Islands (via Aberdeen) where the Chevron drilling ship the ‘Stena Carron’ was about to leave Lerwick Harbour to make it’s way to an exploratory deepwater drilling site to the north of the Islands in the Lagavulin oil field (at the time of writing the company still had not been granted permission by the Department of Energy and Climate Change).

There the touring activists spent a week preventing the ship from reaching its destination. First, they occupied the anchor chain and erected a ‘survival pod’ to stop the ship leaving the harbour but when Chevron’s lawyers won a court order demanding that the occupation be abandoned immediately the 100 hour action was called off and the ‘pod‘ was lowered. 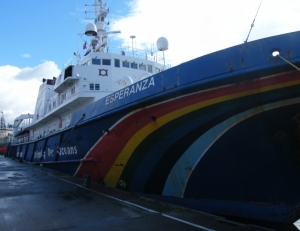 Determined to stop the vessel from reaching its destination, the group changed its tactics and despatched a group of swimmers to block its path.

This controversial action, deemed by many as ‘dangerous’ and ‘reckless’, was brought to end after Chevron’s lawyers made a second trip to Edinburgh and won a second injunction against Greenpeace. On hearing the news, the activists again called off their 50 hour action.

The Stena Carron then continued on its way to the site and the activists returned to the Esperanza. There is currently a nationwide campaign underway to dissuade the Energy Secretary Chris Huhne from granting permission to Chevron to begin its deepwater drilling project in the Lagavulin oil field.

The tour goes on……