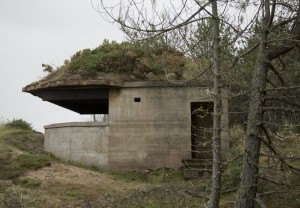 Duncan Harley reflects on the art of street protest.

Belfast remains a sectarian mess. Hatred of the folk next door or over the road, plus a sense of outdated history divides folk who might otherwise be best of friends given the need for a simple cup of sugar. The religious divide may be just a smokescreen for something deeper though.

I well remember an interview with a Serbian who had thrown an old man off a bridge in the “Safe haven” of Sarajevo during the multi-ethnic Bosnian War of the 1990’s. Asked why he had murdered the man he said quite simply that in around 1637 there had been a conflict in which the man’s family had done something similar.

The so called peace walls are a stark reminder of the divide. Belfast has quite a few of these. Symbols of division and hatred, they are reminiscent of the Berlin Wall and the 230 mile long, six metre high wall topped with barbed wire lined with guard towers which the Israelis have constructed in the West Bank. The walls say much about the intolerance of those who rule towards those who are ruled and speak volumes about the state of Israel, Ireland and the UK.

Banksy’s feelings about such barrier’s are made explicit in a statement which says the wall “essentially turns Palestine into the world’s largest open prison.” Many including the Moray street artist Pantsy wholeheartedly agree. In a rare interview the reclusive Pantsy echoed the sentiments of his mentor.

We met at the Innes Links on the coast midway between the Moray village of Kingston and the township of Lossiemouth. Innes Links for those not in the know is a party place with some attitude. During the 1940’s it was a focus for the defence of the realm. In those dark days there were quite justified fears that the Moray coastline was the soft underbelly of Scotland.

Norway had been invaded by the German’s and with air raids over Moray and Aberdeenshire a daily menace it seemed logical to expect invasion from the sea. Nowadays however the coastal defensive structures are a mecca for those intent on a few beers and a wee barbeque.

The Innes battery ( pictured above ) features a couple of gun emplacements, a couple of searchlight casements plus a rangefinder housing. There are the obligatory latrines plus a few thousand anti invasion blocks manufactured by Polish troops employed as forced labour by a local building company who got the contract for General Ironside’s anti invasion plan. 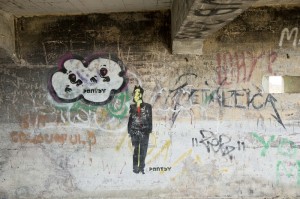 Pantsy has added a few pieces of his art to brighten up the somewhat outdated 1940’s décor of the Innes Links Battery.

In fact his spray paintings put to shame those who like the anonymous “FU” reflects “Mo Mo is fat”.

Pantsy told me “My art is simply a reflection of what humanity does to the underdogs and I don’t need to defend it”.

I asked if he was expressing something deeper.

The response came fast and sharp.

“Keith lads suck, Lossie lads are much better, in fact ten times as good, maybe even more. Try them at darts is all I can say. But I’m not sure.”

He told me of his grandparent’s experiences during the Irish rebellion of 1916. How those patriots were mistreated by the Black and Tans. How the ordinary folk of that island, were mistreated. How the folk in his country were vilified by a war torn Britain who only saw the rebellion as a treason in the face of the common enemy who threatened death and destruction from the air, land and sea.

Seemingly his great uncle was murdered by the men of the Staffordshire Regiment and a cousin far removed met a similar fate in rural Cork.

It’s really no great surprise though that the Irish needed their independence. There had been the British indifference after the harvests failed and folk in the south began to starve.  There had been the issues of the setting up of a general election set up by the British authorities in 1918 where 70% of the voters decided to support candidates pledged to abstain from the ties of English authority but were ignored.

There had also been the issues of Easter 1916 when a “terrible beauty was born” and many good Irish folk died by shooting and hanging in the cause of shedding the yoke of an oppressive and often uncaring ruling elite.

Tom Barry wrote in “Guerrilla Days in Ireland” about those dark but somehow progressive days. Tom was Commandant General of the West Cork flying column and in his early career was pitted against the combined might of the British Army in the days just after the first war to end all wars. 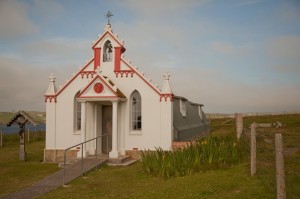 The first, who was later to surrender his entire army to the mercy of the Japanese in Singapore, due to his extreme anti-Irish attitude and encouragement of torture. The second because of the man’s habit of allowing his troops free reign to murder and pillage at will.

Percival survived the assassination attempt seemingly due to his habit of raiding and murdering IRA sympathisers at random, he was out on a raid on the night in question it seems.

Montgomery simply went to tea with a new mistress on the night in question thus avoiding the assassin’s bullet.

One ended up as a prisoner of the Japanese and the other ended up as the heroic general who led his troops to victory in the Western Desert at El Alemain.

After Montgomery’s desert victory, there were many prisoners a number of whom were brought back to the UK to live out the rest of the war in captivity. The Italians were the most numerous. Their leader Mussolini had neglected to provide them with much transport and their German allies stole what was left forcing most of the Italian desert troops to surrender at the first opportunity. 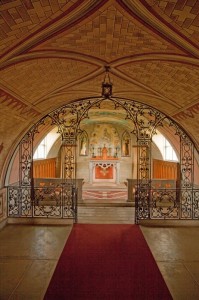 Out of over one hundred thousand Italians who surrendered in 1942, around 1300 were sent to Orkney and housed in three prisoner of war camps tasked with building the Churchill Barriers following the disastrous sinking of the HMS Royal Oak in Scapa Flow by the U 47.

From the desert heat and water issues they then faced the freezing winds and belting sleet of an Orcadian winter.

This beautiful chapel is their legacy.

Built using found materials and the parts from two Nissan Huts it survives to this day as a memorial to the spirit and resourcefulness of the people of Italy in the face of the defeat of Fascism.

If Tom Barry had succeeded in the assassination of General Montgomery then in all probability this chapel would not exist.

With grateful thanks to Wm Yeats, Pantsy and Tom Barry without whose help this article could not have been written.