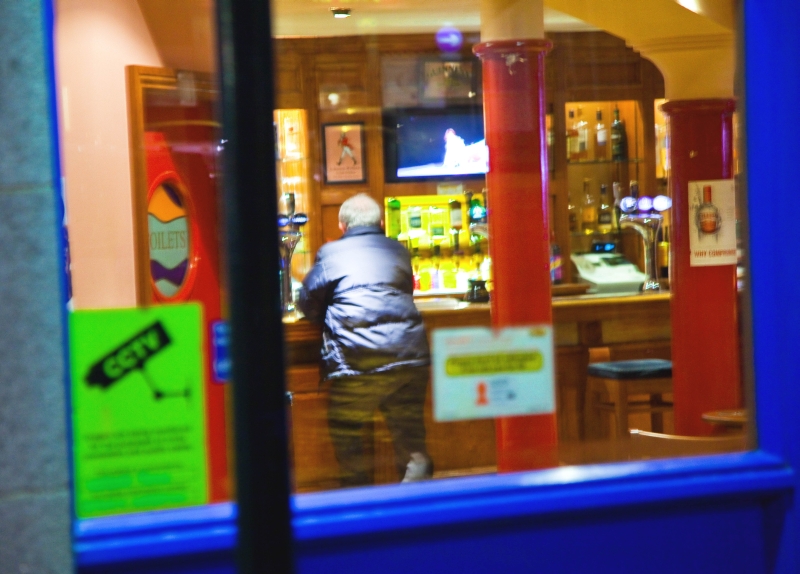 That smell of old men’s wee and stale lager hung around the bar.
Locals knew it as Guys and most avoided it like the plague.
Of a weekend, the place was heaving with folk racing to sink a few before the match and  then afterwards back for more drink before making an unsteady way back home, oblivious to the cold and dark and no doubt watering a few gardens along the way.

Tonight there was no match though, only Danny.

“Over here, grab a pew, what’ll you have, you’re a wee bit late pal, party’s already started, where you been?”

Danny and me went back a few years, too many to be honest, but what can you do? Last time I’d seen him he was legless. Mind you his mouth was still working big time slagging off the politicians and the work shy of our green and pleasant city. ‘I blame the Tories’ was his favourite saying when he was pissed, often closely followed by crass remarks about the Poles stealing our jobs and winching our women.

There are not many Poles round this locality which is just as well, since Danny just thought he was being funny and probably would have no recollection of what he had spouted forth the next day, unless of course he awoke to some unexplained bruising.

In the 1980’s Danny had a business running strippers around the north east. Made a fortune, loads of hangers-on, everyone’s your pal while the going’s good sort of thing. Sex, drugs and money all around, anyone who was pals with Danny had a ball. Jack Daniels on tap and coke on a rope. Every night a party night, every day a new thrill.

Then, when eventually the big boys moved in, he was forced to bow out or face annihilation.

Then came a debt collection business, repossessions and the like

The heavies didn’t even bother to buy Danny out, they just had a wee word with him one night in some dingy Fraserburgh club backroom. Something about the depth of the harbour at high tide was mentioned and it was party over.

No more hangers-on. In fact almost no friends.

Then came a debt collection business, repossessions and the like.

At first it was just cars and tellies but soon evictions, Poll Tax debts, poor folk getting hammered and the like finally got to him. Overnight, Danny became an odd job joiner, skint but with respect.

“Get away, you been drying oot? That’s why I’ve no seen you for months, makes sense now!”

As I say, we go back a long time Danny and me. Join the dots and make a fancy picture, might not be the right one, but it makes a pretty sight.

“Nah Danny, just out of prison if you must know. Aggravated murder with menaces. Got off with 6 months, judge said not to do it again or else. What you been up to?”

“Ah right, nice judge! Just on the bevy to be honest. Chucked in the joiner stuff, doing a few gardens if you must know. Been writing.”

The drinks arrived. A pint and double plus a surprisingly-handsome porcelain teapot complete with matching cup and saucer. The phrase ‘shaken not stirred’ came to mind, and then a waft of reality emerged from the men’s toilets.

“Writing Danny! That’s good. What kind of stuff? Poetry maybe, I remember you were well into the war poets at school? There was that Owen fellow, you were quite moved by him as I recall.”

“Nah, nothing like that. Science writing mainly. Not that daft science fiction mind you. More like popular science. Stuff about wind power and those renewables. Solar power, that kind of thing. Power of the sun and the wind, I that’s it mainly. Kinda thought that if that Trump mannie was against it, then it must be good.”

Over the next hour or so, I listened politely to Danny’s theories of the universe and how to change society for the benefit of the masses and maybe in passing a wee benefit for him as well.

How we all need to cut down for the sake of the folk who come after us. How if Samuel Pepys had seen fit to award the Wizard of Gordonstoun £318 in 1687 in recognition of his invention of a ‘better sea pump’ for the Admiralty, then it stood to reason that the inventor of the solar-powered aircraft carrier would be due a tidy sum indeed.

How runways and the like should be covered with solar power arrays which would rotate to face the sun according to the time of day. How golfers should hitch their clubs up to dynamos when driving in order to generate power for the national grid.

Several pints later, with my tea cold in the cup I made excuses and left. I haven’t seen Danny since but wish him well despite the spectre of all of those aeroplanes crashing into solar panel strewn runways all around the globe.

I do think his idea for hitching golfers up to the national grid is a good one but I doubt if it would really catch on.

As I say, Danny and me go back a long time. Maybe too long some would say. But what can you do?