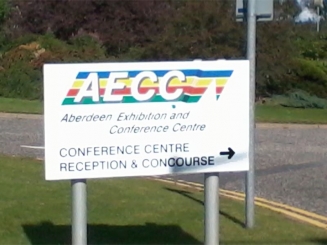 Where do I start? I have to be frank and say that I’m not particularly knowledgeable about the ins and outs of the City Garden Project and other megabucks initiatives that seem to have been put on ice by the Aberdeen City Council administration.

However, I have an opinion on most of these things, regardless of my sometimes shocking lack of insight.

You see, I voted in favour of the proposal to change irrevocably the landscape of Union Terrace Gardens, and, of course, the city centre itself, because I’m a contrarian by nature.

I was totally fed up with people seeming to bemoan the loss of the heart of Aberdeen, a reference to our great Victorian architectural heritage.  Did anyone ever use the Gardens before Ian Wood came along with his £50m? Alternatively, I suppose, would it not cost more than, say, £100m to bring the Gardens to street level? However, why were the proposals thrown out when a public vote, albeit a narrow one, wanted them to happen?

I could have sworn that it was only at that point that the Gardens, admittedly an island of green amidst a sea of cold, grey granite, had anyone taking notice of them. Now they’re holding placards. Better late than never.

Friday 7 September, was the day when I was meant to have a rather innocuous look at ACSEF’s AECC conference Securing Investment for Success.

“Our economy continues to punch well above its weight compared to other regional economies in the UK. Yet the public funding we receive is not commensurate with this economic contribution. We are in the process of confirming a strong line-up of public and private speakers and are looking forward to a robust debate and some strong recommendations and potential solutions coming out of this summit.”

Fair enough. A push towards The Big Society? Very nice.

A public consultation? After all, ACSEF is funded by Aberdeen and Aberdeenshire taxpayers.

Not a chance. Just senior managers from the business community, Council officials and local MPs and MSPs.

Despite this, I was told I shouldn’t have too much problem getting in. Well, you’d have thought so. But no, two invited delegates, who couldn’t make it, and from whom I tried to gain delegation, couldn’t help either. One had invited his brother instead. No problem.

“What about you, Iain Richardson?”

“Yeah sure, will ping an email to Katrina Dunbar, Events Director with the Big Partnership”

Thanks, I’d like to pass my place on to Andrew Watson, please.

I have seen this very email, sent to Katrina by Iain Richardson, stating that he was more than willing to pass his invitation on to me.

The communication I had with Iain Richardson, from what I could recall, is that he was planning to send the invite on to other contacts but we are within our rights to restrict entry to those who are not representing business as I previously stated. I’m afraid that I am only stating the guidelines that I have been given in terms of entry to the Summit.’

Concluded with a rather curt ‘trust this settles the matter’. Our only hope, to be honest, is that our business people represent the thoughts and feelings of the general Aberdeen public as best they can, and I have no doubt they will.  However, it doesn’t present the full picture, does it?

Which brings another of Mr Contrary’s bugbears to the forefront

Why were the proposals for my beloved Aberdeen FC chucked out?  Pittodrie’s crumbling, or so I’ve been told. Cue angry responses, including from me. I can’t help but feel, rather flippantly, without our slice of Dubai rock in UTG, and without our modern stadium in Loirston, you know, getting with the times and all that, are we forever to be relegated to provincial town status?

Don’t get me wrong, part of me, a defiance rooted somewhere in Teuchterville, wants this always to be the case. I don’t claim to know all the answers, but I know this cannot go on forever, and it irks me somewhat that not more of a concerted effort is being made towards public consultation, rather than just a yap between businessmen and councillors.

Take the proposed pedestrianisation of Union Street, or even the Loirston proposals.

The hub of our one-street town grinds to a halt most days, never mind when the International Market takes place on Union Terrace. What will divert crowded traffic elsewhere? A bypass, perhaps? Is that going even to happen?  What about surgery for the Haudagain artery? A long-term chronic heart problem for our city, if we’ve ever had one!

Loirston needs serious work. Where is the infrastructure in the area to support the stadium proposals and the crowds, cars, and busloads of fans transferred from King Street to Cove? Would we be not better taking the stadium somewhere else, which already has easy access in, out and away from the city centre? With common sense, would infrastructure projects like these really have the combined cost of £900 million, mooted by ACSEF?

How about asking bus, truck, lorry and taxi drivers what they think should be done? Or hell, have a consultation of commuters, for all I care. Just get it done!

I’m afraid my generation is the one likely to have to pay for this convoluted ‘granite web’, and the £900 million building plan ACSEF has announced is one bitter pill for the heart.