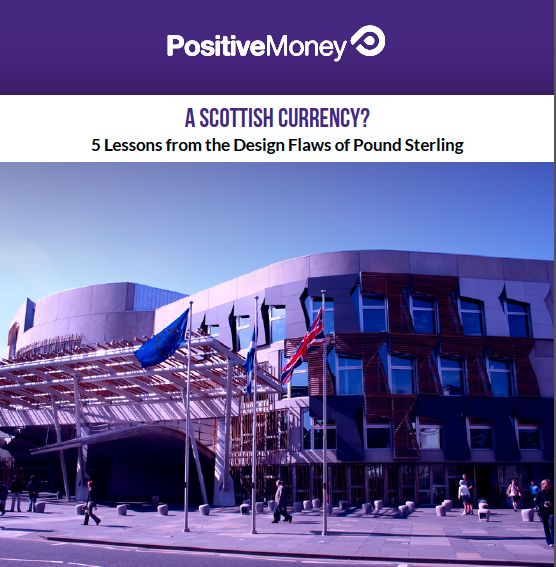 With thanks to Aberdeen Group of Positive Money Supporters.

Positive Money’s ‘A Scottish Currency? 5 Lessons from the Design Flaws in Sterling’ highlights the necessity of limiting the creation of a Scottish currency to a Scottish Central Bank.

The report is helpful in pointing out some of the pitfalls of a Sterling-type currency,
namely:

1. The amount of money in the economy currently depends on the confidence of bankers.

‘Commercial banks are the creators of deposit money…rather than banks lending out deposits that are placed with them – the act of lending creates deposits – the reverse of the sequence typically described in textbooks.’ (p15)

Every new bank loan creates new money. Since some economics/finance textbooks do not portray money creation in reality, some people may have (through no fault of their own) incorrect assumptions on this matter.

2. Any attempt to reduce household debt can lead to recession

Since banks create new money when lending, money is destroyed upon repayment. This can shrink the amount of money available in the wider economy.

3. The economy can only be stimulated through encouraging further indebtedness

Most broad money is created as a debt when people borrow, so the fastest way to create an economic recovery is to encourage people to keep borrowing. The only real alternative is something like Quantitative Easing (and even then – please target the real economy!)

4. Proceeds of money creation is captured by the banking sector rather than taxpayers

The Bank of England sells the notes and coins it creates at face value. Between 2000 and 2009, this profit on newly-created money (‘seigniorage’) added up to £18 billion. These profits are passed on to the Treasury.

Between 2000-2007 banks increased the amount of money in the UK by £1 trillion. However the law does not extend to cover seigniorage on this form of money. Banks gain interest from issuing those funds. The Treasury gains nothing.

5. Banks cannot be allowed to fail – if they did the payments system would collapse.

Under one roof you have one bank performing three functions. Firstly, a payments system to receive and transfer money (through your current account). Secondly, providing investment and savings vehicles for the longer term. Thirdly, access to loans and mortgages.

The bank deposit money or electronic money that we use today is simply the accounting liabilities of banks, meaning that if a large bank fails, our money is frozen and can no longer be used to make payments. Hence the need for a government scheme to guarantee deposits in case the bank fails.

Scotland could design a better currency and banking system. For instance, at the height of the Great Depression a number of leading U.S. economists advanced a proposal for monetary reform that became known as ‘The Chicago Plan.’  With this –

1. Deposits would be backed 100% by money at the central bank.

2. Banks could not finance loans by simply creating new money.

3. The payments systems would be separated from the savings and loans functions.

1. It would eliminate bank runs

3. A dramatic reduction in private debt

In 2012 this was tested by the IMF’s Michael Kumhof and Jaromir Benes who modelled the US economy in ‘The Chicago Plan Revisited’. (It has answers to common questions too.)  They found fully capturing seigniorage (the proceeds from creating money) would consistently bring in 3.5% of GDP every year (p84). In the UK context that amount could half the deficit. (2013-14 borrowing is 6.6% of GDP)

‘Our analytical and simulation results fully validate Fisher’s claims….We find that the advantages of the Chicago Plan go even beyond those claimed by Fisher. One additional advantage is large steady state output gains…. Another advantage is the ability to drive steady state inflation to zero… This ability to generate and live with zero steady state inflation is an important result, because it answers the somewhat confused claim of opponents of an exclusive government monopoly on money issuance, namely that such a monetary system would be highly inflationary. There is nothing in our theoretical framework to support this claim.’

Kumhof commenting on it all said:

‘We can think of only one serious disadvantage, namely that the transition could be complicated and risky. But earlier thinkers, including Milton Friedman, did not share this concern, and the risks would have to be enormous to justify not giving the Chicago Plan very serious consideration.’

1. Deposits would be backed 100% by public reserves.

The Chicago Plan leaves bank deposits completely unchanged; what changes is what deposits represent : indestructible public money rather than volatile destructible private money. Banks would borrow from the Treasury to obtain full coverage for all deposits. Rather than money being destroyed when repaid as at present, it accrues to the government as seigniorage.

2. Credit could not be financed by creation, ex nihilo (out of nothing), of bank deposits.

For money, it requires 100% backing of deposits by government-issued currency, combined with a strict money growth rule to control inflation. Today’s deposit creation out of nothing would be made illegal, the financing of new bank credit could only take place through banks retaining earnings or borrowing funds in the form of government-issued money.

The government is therefore fully in charge of controlling the broad money supply. The power to create and destroy money is taken away from banks, and returned to a democratic transparent and accountable process. And without banks’ rapidly changing attitudes towards credit risk (largely via asset bubbles) the amount of money in the economy would be more consistent reducing business cycle volatility.

3. The monetary and credit functions of banking would be separated.

The state is therefore fully in charge of controlling the broad money supply, but private financial institutions would remain in charge of determining the credit supply of real investments. Financial institutions concentrate on their strength, the extension of credit to investment projects that require monitoring and risk management expertise. Badly-run banks could be allowed to fail.  Meanwhile the payments system of the economy would be fully secure with a 100% reserve.

4. The government would be allowed to issue money directly at zero interest

This allows more money to enter the economy without there also being more debt. Spent rather than lent.  The central bank would decide on how much funds could be created which would then be passed on to the government. What it would be used for would depend on government policies.

Issuing money debt free rather than having to borrow it from banks at interest should help public finances and private debt levels. This could evidently contribute to reducing economy-wide financial fragility.

To conclude, Scotland (or any country for that matter) could have a brighter future with its money under the full control of its central bank alongside a better banking system.

Martin Wolf of the Financial Times has already suggested earlier this year to ‘Strip private banks of their power to create money’. The English and Welsh Greens have a very similar economic policy. There is currently a very small but growing cross party awareness amongst MPs of the monetary and banking issues discussed above.

Positive Money is a movement to democratise money and banking so that it works for society. This article was brought to you today by the Aberdeen Group of Positive Money Supporters.