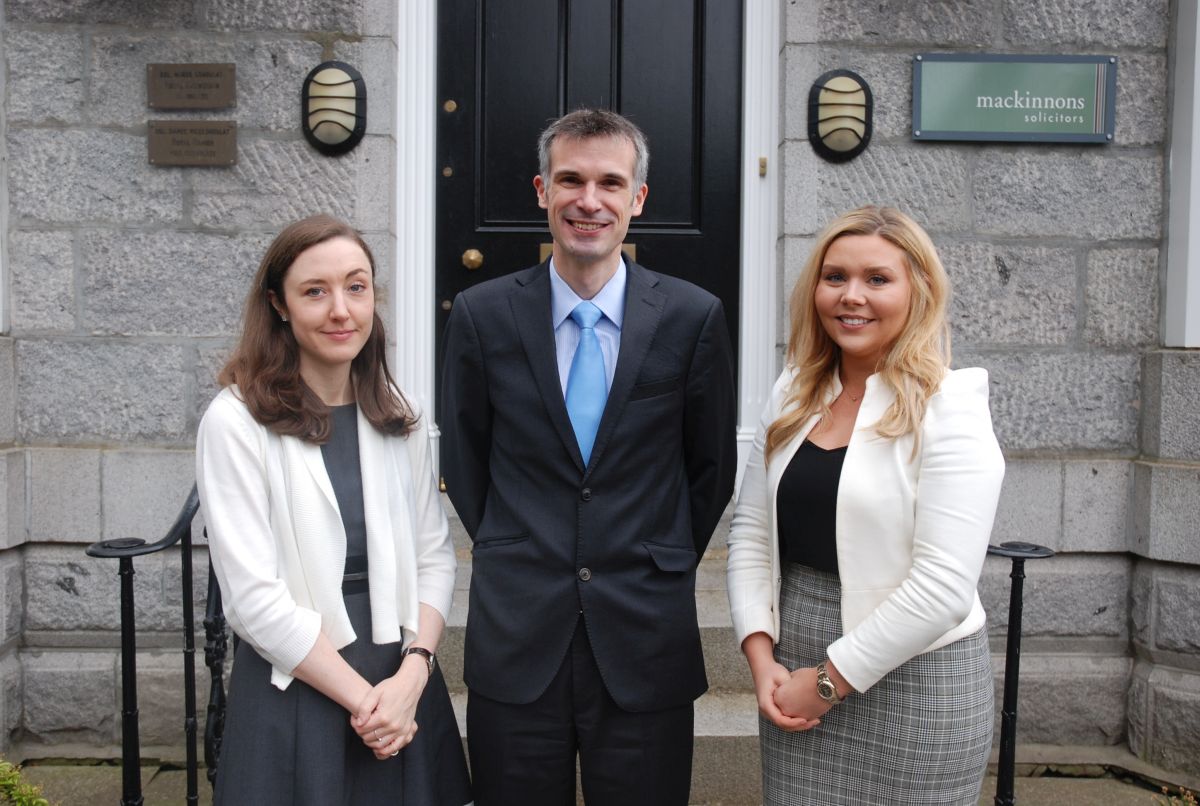 A leading north-east legal firm has strengthened its teams of specialist solicitors in Aberdeen with three new appointments.
Mackinnons Solicitors, with offices in Aberdeen, Cults and Aboyne, has announced two promotions and one new appointment, each of whom will complement the firm’s existing legal teams.

Angus Easton, who recently completed a master’s degree in Maritime Law, has been promoted to the position of Associate within the firm’s commercial shipping team.

Mr Easton joined Mackinnons in January 2013 and his expertise covers areas of commercial practice with an emphasis on marine and business law.

Kim Harkness also assumes an Associate position working within the property and private client teams. She joined Mackinnons in 2013 and has worked primarily as an assistant to firm partner, Pat Gray.

Kate Longmuir has also joined the firm from Pinsent Masons and will be working within the corporate team advising on a range of commercial matters with emphasis on the energy and marine sectors.

Graham Jones, one of the firm’s senior partners, said:

“We are delighted to have appointed Kate to our commercial shipping team. She has considerable experience in legal matters relating to the marine and energy sectors and will be a great asset to us.

“As well as recruiting to strengthen the team, we are also very pleased to be able to promote talent from within. Angus and Kim have already made a significant contribution to the success of the firm and their promotions are well deserved.

“Each of these appointments significantly strengthens our teams of specialist solicitors as we look to build for the future and expand our existing client base.”

Established in Aberdeen in 1842, Mackinnons is recognised internationally for its long-standing expertise in fishing, shipping and marine law. The firm is also a leading provider of private client legal services with a team of experienced and specialist lawyers.

Its experienced teams of solicitors provide professional, pragmatic, bespoke advice for clients, whether they are multinational corporations, local businesses or individuals.

As part of Mackinnons’ 175th anniversary celebrations in 2017, the firm is raising money for The Fishermen’s Mission. 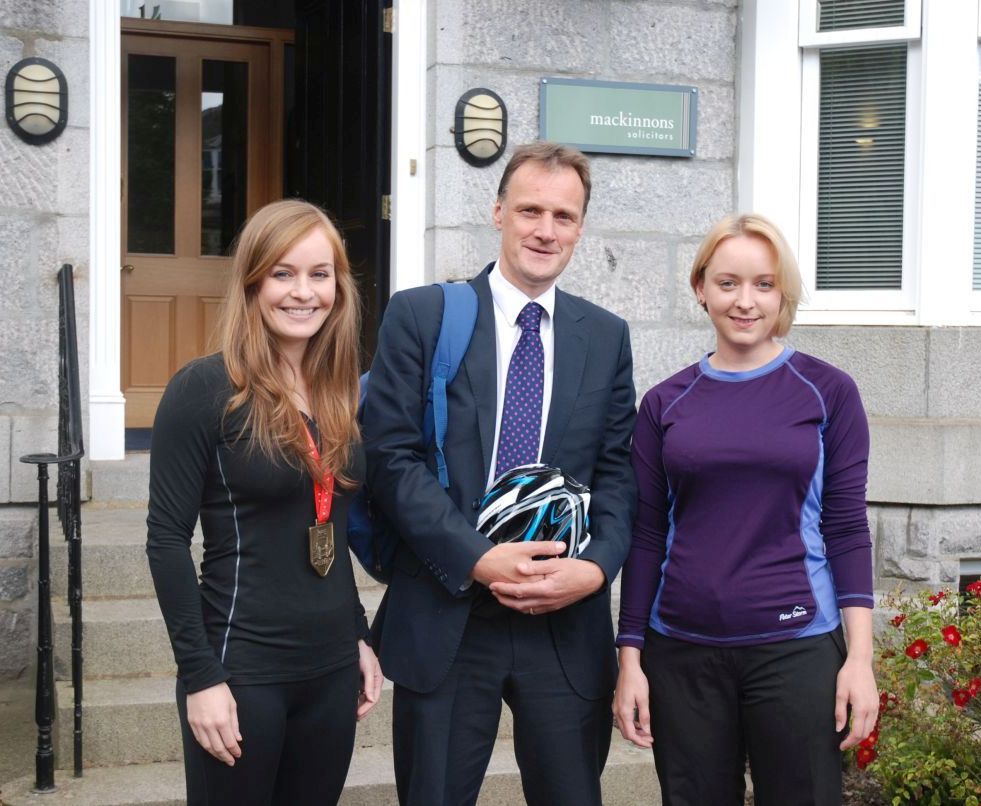 Legal eagles from Aberdeen have been pushing themselves to their physical limits this year and have raised almost £6,000 for charities close to their hearts.
Three legal experts from Mackinnons Solicitors tackled gruelling individual challenges which took one to the top of the highest mountain in the British Isles while one ran the London Marathon and another took on the Highland Cross coast-to-coast challenge.

Sarah Polson, from Mackinnons’ dispute resolution department, Fiona Cheyne from the firm’s commercial and marine department and Mackinnons’ partner Martin Sinclair, who is a specialist in personal injury law, have raised a combined fundraising total of £5,975 for three different charities.

In June, Fiona Cheyne hiked up the 1,345 metre Ben Nevis with her Mum Elizabeth Copp and raised £4,610 for the PSP Association in recognition of the support the charity provides to her dad Andy Copp who has been diagnosed with the rare and as yet incurable Corticobasal Degeneration (CBD).

“We had never heard of the PSP Association until earlier last year, when dad was diagnosed with the degenerative condition which limits his ability to talk, to walk, to grip and to swallow.

“The charity funds research into treatments and it’s hoped a cure can ultimately be found for both conditions. It’s thanks to the PSP Association that mum and dad have been given good practical advice and support in how to deal with dad’s condition. Their support worker keeps in touch with them over the phone and they value that greatly.

“To give something back, my mum and I decided to do some fundraising and laced up our hiking boots to reach the top of Ben Nevis which was a challenging and humbling experience.”

Earlier in the year, Mackinnons’ Litigation Associate Sarah Polson ran in the London Marathon after receiving a ballot place. For the firm’s 175th anniversary she decided to fundraise for the Fishermen’s Mission, Mackinnons charity of the year.

After months of training she joined the 40,000-strong field who ran the 26.2-mile course in April and raised £600 for the charity which provides support and welfare to fishermen and their families.

“They say the crowds get you through the marathon in London and they really do. The route around London’s landmarks was lined with thousands of supporters handing out sweets and biscuits to keep you going and cheering you on.

“There were even brass bands, an orchestra and singers providing entertainment along the way. It was tough in parts but I survived and I’m already planning my next challenge.”

The Highland Cross is a 50-mile duathlon, 20 miles either running or walking and 30miles by bike, which crosses Scotland between Kintail and Beauly.

The funds were split between both the Fisherman’s Mission and the Highland Cross nominated charities in the Highlands which benefit from the event.

“The Highland Cross is a terrific event and I’ve been keen to take part for a while. More than £4.4m has been raised through the event since 1983 and I was delighted to contribute in some small part to the ongoing success of this event.

“The amount of time and work put in by the teams of volunteers to run the event is enormous. The camaraderie amongst the competitors is another key factor in the event and seeing such a large cross section of Scotland as you cross helps to underline how good a nation we are.”

The firm, which also has offices in Cults and Aboyne, is also well known and internationally recognised for its long-standing expertise in fishing, shipping and marine law.

The firm’s experienced team of solicitors provide professional, pragmatic, bespoke advice for clients, whether they are multinational corporations, local businesses or individuals.

As part of Mackinnons’ 175th anniversary celebrations this year the firm is raising money for The Fishermen’s Mission throughout 2017.