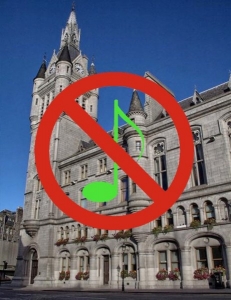 Many Aberdeen musicians and their colleagues from all over UK are dismayed at the proposed cuts in the instrumental practice in Aberdeen.

While those at home are aware of the many vital services that have been slashed in order to cut the Council Deficit, those outwith Aberdeen are frequently unaware of the context and are wondering how the ‘Oil Capital of Europe’ cannot ensure an enriching and nurturing educational environment for all its children.

The supply of subsidised music tuition is not a statutory requirement in schools and therefore is probably considered a soft target by our cash strapped council.

In defence of the council, they have traditionally provided an instrumental service in schools that was the envy of many, lauded at home and abroad as setting a benchmark for other councils to aspire to.

Over many years the Aberdeen/shire music peripatetic staff have :

Of course there are further benefits from this kind of specialised service. For many children in deprived areas this has been the only nurturing “one on one” experience that they were assured of on a weekly basis.

A pupil should not be judged soley by their musical progress, but also by the wider benefits that are evident in their general development and interaction with their peers.

There has been considerable investment in music over the years in Aberdeen, and it shows! Aberdeen is recognised nationally for the excellence of it’s contribution to the music world. If this was removed we could see more than a lack of a musical milieu in Aberdeen.

These are difficult times caused by a variety of circumstances countrywide, and within the council. The concern that councillors may act for the “the moment” and not  be around or answerable to appreciate the consequences of some of the cuts are understandable.  The sacrifice of some of our creative nurturing traditions could leave our society fighting the “rearguard” action that we often see in deprived/urban areas, where increasing amounts of money are being spent to battle drugs, alcohol, obesity and general laxity.

Children should have a chance for a productive and happy future. This is to some extent determined by the quality and breadth of their all round education.  Instead of enacting  cuts that could have us mopping up the ‘fallout’ for many years to come, our  councillors should reconsider their recent proposals to cut a service which has for many years been a beacon in the  world of musical education.

At Woodend Barn this Saturday, music lovers can enjoy a fresh approach to the music of Chopin, and Scotland’s influence on his work. 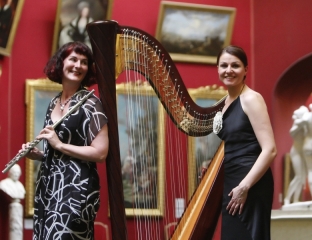 Amadeus Duo – Margaret Preston on flute and Alina Bzhezhinska on harp present a programme of Chopin’s music. Their arrangements give an interesting slant on Chopin’s piano music, as the evocative and sensuous combination of flute and harp take a fresh look at some of the most popular piano repertoire. They will also play the works of composers who influenced Chopin on his travels in Scotland.

The girls have toured this concert to many venues in UK and in Ukraine as part of the international celebration of Chopin’s 200th Anniversary (1810-1849). The tour will end in October with a concert at RSAMD where Alina was appointed Harp Lecturer in 2008. The programme which is designed to be audience friendly is narrated by Margaret and Alina who as well as playing their special arrangements, present amusing and revealing extracts from letters and commentaries from the last year of Chopin’s life.

Alina says, “I feel a special affinity for Chopin’s music and have found some experiences in his letters that I can definitely relate to, having had some similar thoughts when I settled in Scotland some years ago”

Margaret and Alina met in Aberdeen Music Hall in 2003, when they were playing Elgar’s Dream of Gerontius with massed Choirs and Orchestra conducted by James Loughran. This was a tribute to Lady Aberdeen in tribute to her 90th birthday. The girls “hit it off” and decided to form Amadeus Duo in order to play some of the glorious music written for their instruments. Since then they have played a diverse repertoire, everything from Mozart flute and harp concerto to Debussy and contemporary music as well as their own compositions. They have been invited to play their arrangements of Scottish music in Kiev next year.

“The proof of that was an almost full-house and in an arena which can be notorious for extraneous noise, there were almost no disturbances at all as everyone became absolutely absorbed in the seductive sounds of the Duo…. After the concert, many among the audience stayed to chat to the two performers and not many people rushed away to go home. Always a good sign!” –Alan Cooper

Saturday, 4 September
7.45pm, Woodend Barn, Banchory,
£10, £2 students, under 18 and jobseekers
The concert is being promoted by the Woodend Barn Music Society.