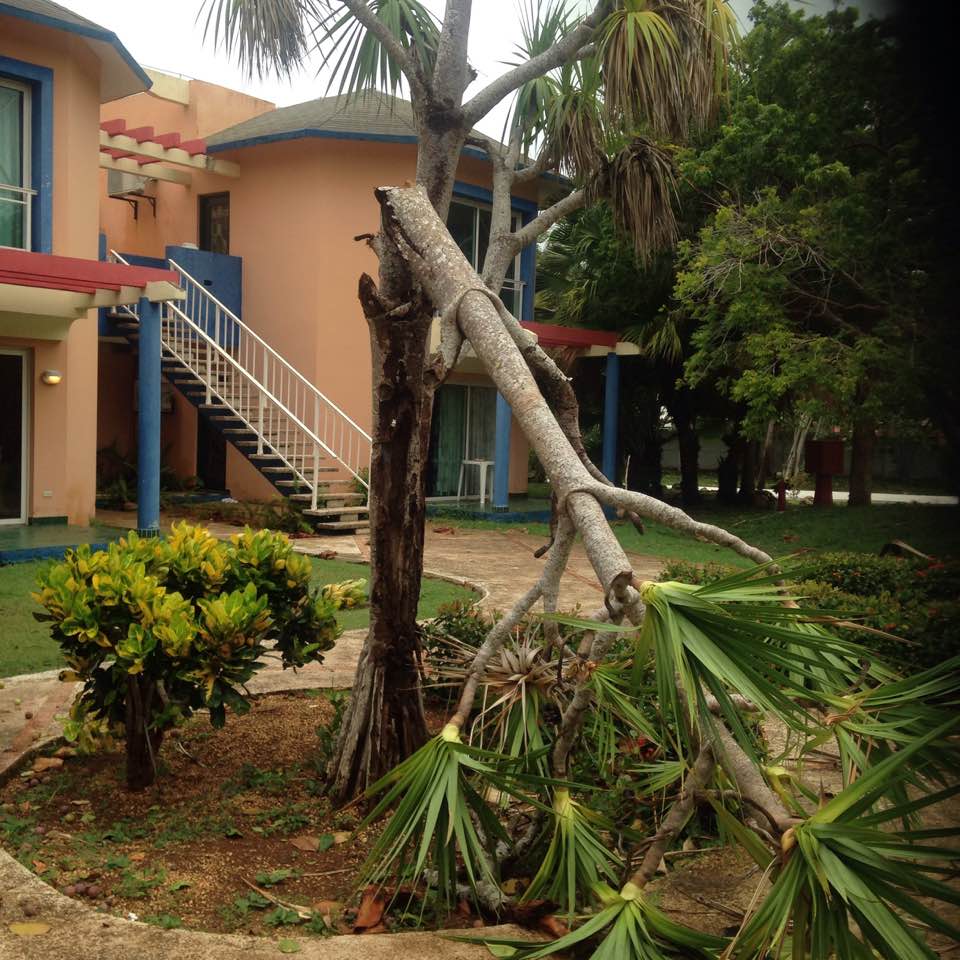 At the end of July, my wife and I went looking for a cheap, last minute all inclusive holiday. Finding Europe still overpriced, we opted for two weeks in Cuba.
We flew out from Manchester to the beautiful island of Caya Coco. This gorgeous forested resort has only 4 or 5 hotels, and has the most gorgeous beaches and very uncommercial. Our first week was spent in an idyllic and restful state.

As we were on holiday, we avoided Facebook and other social media sites. However, I did go online quickly to check on something at the weekend, and saw a message from one of my sisters in law telling me that there was a possibility of a hurricane coming our way.

Then on Monday when I phoned my daughter, her husband also pointed out there was a hurricane coming our way.

I then switched on the television and looked at CNN and heard about Irma heading up towards us. We then realised that things could get difficult. As time went on the situation became more and more serious.

On Tuesday it was announced that the area was on an official hurricane watch. That changed on Thursday when were told that we had to meet in the main hotel lobby at 1330 with all our suitcases packed and that the whole island was going to be evacuated up north, a 7 1/2 hour drive to Valadero.

Canadian tourists had been flown back home, but for some reason Thomas Cook decided not to fly us home; in fact they still flew the latest batch of tourists into Caya Coco on theWednesday.

After hours of delay we set off on this road trip. Crossing, for the last time, the 17km causeway, with pink flamingos resting in the water, that joined the island onto the mainland, stopping only once, at a petrol station, where the shop basically only sold coffee, beer and cracker biscuits.

Arriving just after midnight at the Iberis Starfish hotel, we all alighted he bus and were given our rooms. Tired and weary, and a bit hungry, we made our way to our room. On entering, we discovered it was ant infested, on the floor, in fact everywhere. The hallway leading to the room looked as if they hadn’t been cleaned since Castro officially opened it in 1977. Holes in the ceiling, dog ends on the threadbare carpet and mould were only some of the defects found.

We headed back down to reception to complain only to find the around 3/4 of the 20 bus loads of people were in the same situation. In protest, we all decided to spend the night in the public areas of the hotel, snatching only small stretches of sleep.

About 6.30am, we decided to go up to our rooms to quickly shower and change, a nap was put on hold when my wife saw ants on one of the beds. 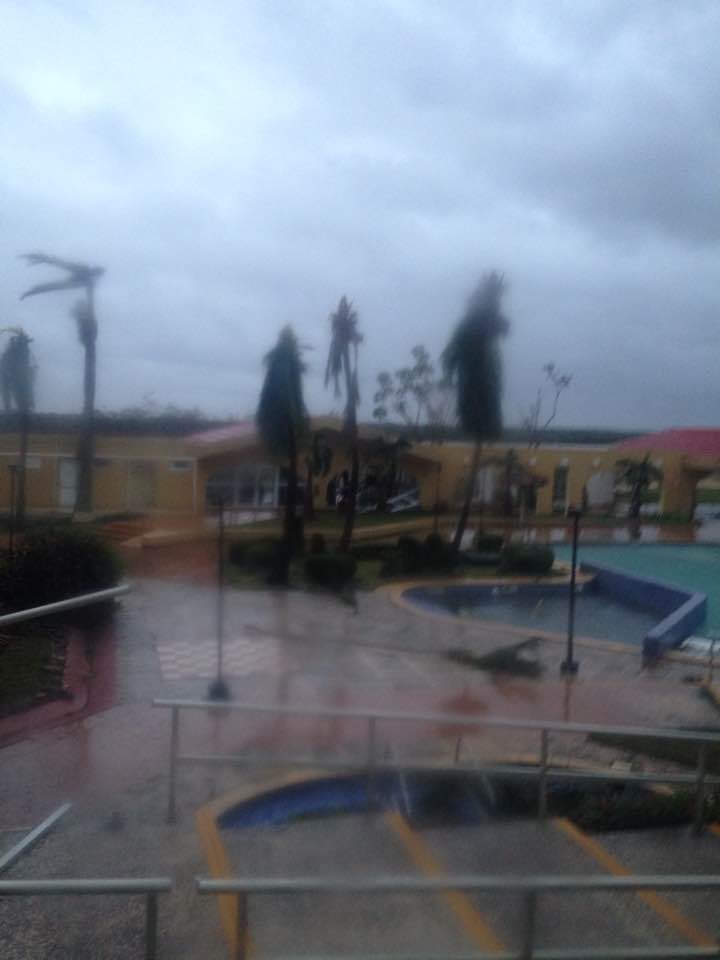 Mid morning, after a bit of breakfast, we were allocated another room. This one totally opposite in quality, being utterly five star.

It wasn’t empty yet as the guest within hadn’t checked out. We returned after 2.30 pm to find that she decided not to check out, and the hotel staff had neglected to inform us.

They then gave us another room, actually a bungalow outside the main building, in the gardens near one of the pools.
So around 4.30pm, twenty four hours after we left the island, we eventually went to bed.

A good bit past midnight we awoke, having missed dinner, to the sound of the wind blowing a hooley outside. Looking out the windows, the trees had already begun to lose some of their fruits.

Just after 7 am, I saw that the buffet breakfast area was open. After eating we had a meeting to attend in the main building, walking up to it through puddles of water and broken branches lying strewn the gardens and footpaths. At the meeting we were informed that those guest who were in the bungalows were being moved to the main building, and that all the guests were being confined to their bedrooms to ride out the hurricane.

Each section of the hotel had a staff member on hand to assist. On entering our room. We saw that the sliding patio door type windows, had broken seals and that there was was gaps between the glass and the frame. We immediately took the mattress off one of the beds and placed it in front of one of the doors, and then took the bottom of the bed and placed it in front of the other door.

Getting towels from the maid, we placed them in front of the window on the floor, and the same in the bathroom.

It was a case from there on in of wringing the towels out and mopping the floor, until we gave it up as a bad job, and joined some of the other people in the corridor along with Maria, the customer service assistant, who proceeded to give us free salsa lessons.

Around this time, another member of the hotel staff came up and told us all to get our necessary belongings, not our cases, and get into the hallway. So, chairs, pillows, food, towels etc were removed from the rooms to the safety of the aforementioned corridor.

The category 5 hurricane was well taking hold in this part of the country, after demolishing our previous holiday destination.

After being out of our rooms for a couple of hours, we heard a crash from within our room, and when I tried to get in, even with two of us pushing, we couldn’t open the door. The window had obviously been blown in, and the wind was swirling round it.

Later a male staff member arrived, and we managed to get into the room, where our suitcases were rescued from the safety of the cupboard they resided in. It transpired that the window with the mattress in front of it had blown in, and broke, but the only thing that stopped it shattering, was the fact it had fallen on the mattress that wa placed in front of it. The one with bed was still holding up. Water was all over the floor, and the television was rescued in case it blew away. 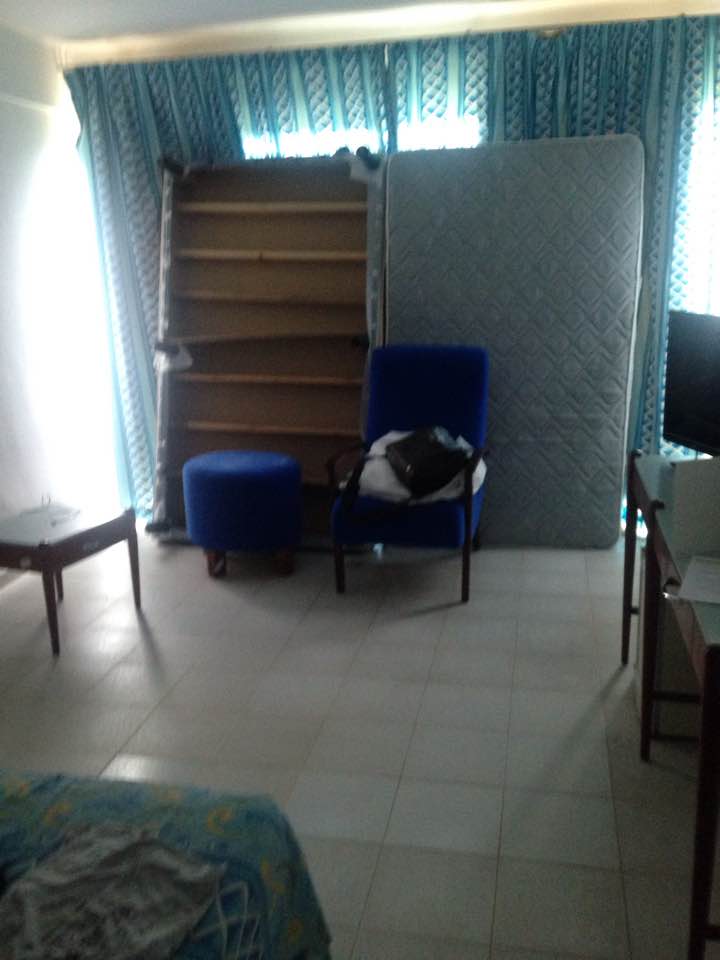 We immediately took the mattress off one of the beds and placed it in front of one of the doors.

And so the long and hot vigil continued.

Around 11pm, we were allowed back into our rooms; or to be more precise, those on the left side as the other side, our side, was deemed too dangerous.

A Canadian couple gave us their room as they were going to share with their teenage daughters.

We just had time to clean our teeth and we were called out again, as a window in a room on the ‘safe’ side had blown in.

Fortunately it was just a store room, but people’s safety was paramount.

Just before 1am, the door to our damaged room was opened a tad and a small wedge was put in place so fresh air was able to circulate along the passageway. Much to everyone’s relief.

Every action has an opposite reaction they say, because just as it became easier to breath, the power went out.

Eventually sleep came to all, some on chairs, some on suitcase tables, my wife and I on a blanket on the ground.

Daylight came and the rain had ceased but the wind, although lessened, was still blowing hard. Looking around the outside, the devastation was unmissable. Trees down, roof tiles shattered, many windows smashed and water in places water wasn’t meant to be.

Areas inside, which had openings to the outside were as badly damaged. Ceiling liners all over the walkways, electric lights also. Vegetation had found its way into the interior as well. Within hours though,such was the efficiency of the staff, that all of the interior debris, in public places had been cleared and people were able to move about freely. Some exterior areas had been made accessible too.

Food was still being delivered to the guests.

Normality resumed later that evening. Despite being informed that we would be under lockdown from 10pm, the bar, which had only been serving coffee or tea and soft drinks, started serving beers at the back of nine, and remained doing so until 11.

Food was no longer being delivered, but was being distributed in the bar area. Sunday saw things return to some semblance of normality, well as of normal as possible. The buffet restaurant reopened for lunch, it had its own generator. The fridges/freezers however were still down as they were on the grid of the local town.

A lot of the main footpaths were being cleared by hand, with the only extra being a lorry was deployed to pull the trees away from the walkways.

News was given that the airport had re-opened and all the Canadian tourists were going home on Tuesday along with 3 three flights of the Thomas Cook ones. Our flight, which was due to depart on Wednesday, appeared to be on schedule.

So as I finish writing this, I have just returned from the bar where a trio of elderly Cuban men played some Cuban music, and, yes I did get up and dance, the first up. After all it was my birthday on the day of Hurricane Irma.