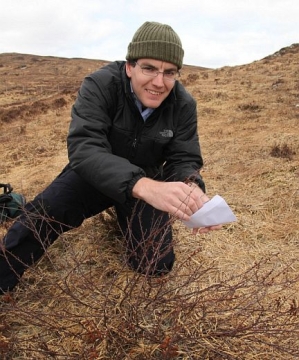 Scientists have announced the sequencing of the entire genetic code – the genome – of a dwarf birch from Trees for Life’s Dundreggan Estate near Loch Ness in Glen Moriston, where the conservation charity is working to conserve a natural population of the species. With thanks to Richard Bunting.

Dwarf birch (Betula nana) is a nationally scarce species in Britain, occurring mainly in small populations on Scottish mountains.
The genome sequencing – a laboratory process identifying the complete DNA sequence of an organism – lays the foundations for genetic research into the birch genus, which includes up to 60 tree species.

This will benefit studies on the conservation of dwarf birch. Project lead scientist Richard Buggs, based at Queen Mary University of London, told Aberdeen Voice:

“Increasing our understanding of tree genomes is essential for our long-term ability to conserve and grow tree species in the UK.”

“This is a tremendous breakthrough. Together with our woodland restoration work at Dundreggan, where we have one of the greatest concentrations of dwarf birch in Scotland, it will do much to benefit the conservation of this important species.”

Dwarf birch forms part of the mountain tree line, where woodland gives way to open moorland. This tree-line contains a unique assemblage of species and should be a miniature, waist-high species-rich woodland; in reality, it has become a ‘forgotten forest’ in the UK, overgrazed and in poor condition.

As part of its Million More Trees campaign, Trees for Life has launched an appeal to restore the ‘wee trees’ that form the natural tree-line, including those growing at their altitudinal limit as well as specially-adapted species such as dwarf birch.

By restoring the ‘wee trees’ of the Caledonian Forest, the charity also hopes to create a woodland link between Glen Affric and Glen Moriston, providing an expanded habitat for many species.

A healthy population of dwarf birch will also benefit the black grouse living along the woodland edge, and ptarmigan and golden plover nesting on the upland moors.

“Dundreggan offers a unique opportunity to restore the complete tree-line community and all its species,” said Alan Watson Featherstone.

The genome sequencing project was funded by the Natural Environment Research Council, and is being published in the journal Molecular Ecology.

Queen Mary University of London, Trees for Life and Highland Birchwoods are partnering to supervise PhD student James Borrell, who will survey the genetic diversity of dwarf birch populations in Scotland over the next three years.

Trees for Life has demonstrated the benefits of conservation action for this declining tree species.

In 2002 they fenced an area of dwarf birch to protect it from grazing deer, with astonishing results: dwarf birches now grow healthily above the surrounding vegetation and support a unique assemblage of species, including a rare moth that is a conservation priority for Scotland and three different sawflies, two of which were unknown in the UK until they were discovered at Dundreggan.

Such finds have established the Inverness-shire estate’s reputation as a ‘lost world’ for the Highlands.

The charity’s work at Dundreggan is a key part of its restoration of Scotland’s ancient Caledonian Forest to a spectacular wilderness region of 1,000 square miles to the west of Loch Ness and Inverness.

You can support Trees For Life by funding dedicated trees and groves, while the charity’s Conservation Weeks allow people to gain practical conservation experience in beautiful locations. For more details, see www.treesforlife.org.uk or call 0845 458 3505

For details of Trees for Life’s Return of the Wee Trees Appeal, please visit http://treesforlife.org.uk/tfl.appeal_dwarfbirch.html