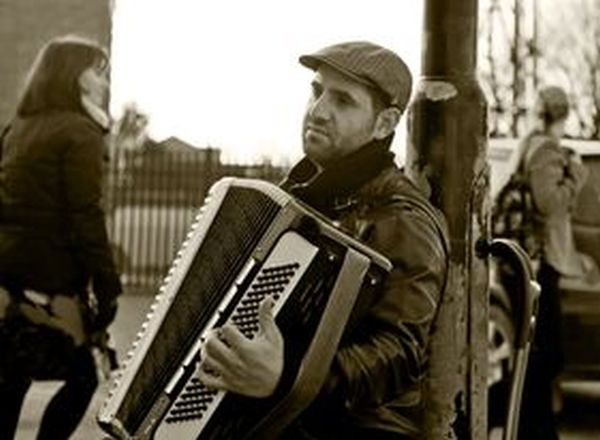 A First World War veteran, Laurence Taylor (1899-1949) arrived back in his native North East in the September of 1918 just a few weeks before the armistice between Germany and the Allies which effectively ended the horrific fighting and the loss of millions of lives across the battlefields of Europe.

After four years of trench warfare, the guns on the Western Front had finally fallen silent.

Wounded by shellfire during an abortive attack on a German redoubt near Ypres, Laurence was hospitalised for several weeks in France before being sent home to his native Fraserburgh where he gradually regained his strength and took stock of his new situation.

Battlefield surgeons had amputated a leg below the knee and shrapnel had severed several fingers on his right hand but, despite these injuries, Laurence was determined to resume his career as an accordionist in a Bothy Band.

Now, folk will usually assert that there is no such thing as a left-handed accordion player. But that is not strictly the case.

Given the right circumstances and a bit of determination, it is perfectly possible to play the accordion upside down. And that is exactly what Laurence trained himself to do.

Over the course of several months, he not only regained his mobility but re-learned his accordion skills using an inverted keyboard specially designed for him by a local blacksmith.

Over the course of several decades Laurence and The Big Accordion Band toured the UK and even made it as far as New York on one occasion becoming what was probably the very first transatlantic bothy ballad band.

Towards the end of his life, the lad from Fraserburgh was interviewed for the local paper and asked about the reason for his success.

“It was all down to grit and determination” he said.

“And I would do it all again if I had to. Mind you the left-handed keyboard has taken its toll on my remaining fingers and you can’t really toe tap effectively with just the one leg in case you fall over.”

The years took their toll however and the man who took the bothy ballads of the North East to America eventually ended up on the streets.

Fame and hangers on had taken their toll and drink had gotten a hold of him. The Big Accordion Band had long since broken up and by September 1947, the Fraserburgh accordionist was reduced to playing for drams in the bars and the strip clubs of rural Aberdeenshire.

Laurence Taylor became ill on stage half way through an open-mike performance at McGinty’s Bar near Cullen in 1949 and died aged fifty in a Fraserburgh nursing home after a short illness. His ashes were scattered at sea.

His legacy lives on however. Not least as the first left-handed accordionist to introduce down-town New York to the bothy ballads of the North East.