Dogstar Theatre’s new production, The Baroness,  starring Roberta Taylor and directed by Matthew Zajac, is opening on Stornoway at the end of the month. As part of the Scottish tour the production will be performing at Alford, Findhorn and Gordonstoun School. With thanks to Liz Smith. 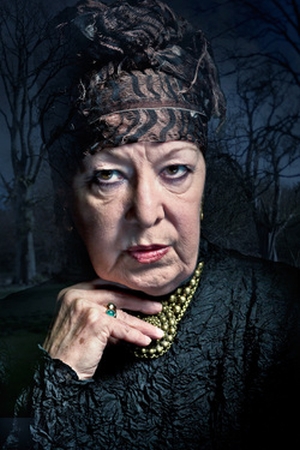 Roberta Taylor as Karen Blixen in The Baroness.

Dogstar’s autumn production, the UK premiere of The Baroness by Thor Bjorn Krebs, translated by Kim Dambaek, opens at An Lanntair, Stornoway, on Saturday 31 August following a preview on Friday 30 August.

The tour finishes at the Traverse, Edinburgh, on Saturday 28 September.

Roberta Taylor, one of Britain’s most talented actresses plays The
Baroness, and is joined by Ewan Donald as Thorkild Bjørnvig and Romana  Abercromby as Benedicte Jensen.

The play is directed by Dogstar’s Co-Artistic Director Matthew Zajac with music composed by Aidan O’Rourke.

In 1948, Karen Blixen (Isak Dinesen) the celebrated writer of Out of Africa, was 62 when she met the recently married and successful 29 year young poet and writer Thorkild Bjørnvig. The two shared a powerful and intimate friendship, their pact, which lasted 6 years, before falling apart.

The play charts the course of this relationship and also the relationship of a third character, Benedicte Jensen, to Bjornvig and Blixen.  Benedicte was the wife of Bjornvig’s patron and publisher.

The Baroness premiered to rave reviews at the Folketeatret in Copenhagen in 2011 and was nominated as play of the year in the 2012 Danish Theatre Awards. Full of tension and poetry, with three tremendous acting roles, the play is inspired by anecdotes, letters and books by and about both Blixen and Bjørnvig.

Roberta Taylor is best known for her long-running roles in Eastenders and The Bill.  She is also a best-selling author with her memoir, Too Many Mothers having sold over quarter of a million copies.  Roberta was a leading member of Glasgow Citizens Theatre for 20 years under Giles Havergal, Philip Prowse and Robert David MacDonald.

Aidan O’Rourke, is one of Scotland’s most exciting composers and musicians and a member of the amazing trio LAU, three times winner of the BBC2 Folk Awards Band of the Year. Recently Ewan Donald toured Scotland with Right Lines’ production of Be Silent or Be Killed.

The production has been designed by Catherine Deverell with lighting design by Kate Bonney. Supported by the Hugh Fraser Foundation www.dogstartheatre.co.uk

One Response to “Northeast Dates For The Baroness”