The following was written some years ago around the theme of a ghost story in which the ghost does not appear.   “Forsythe House” is modeled on two grand houses in the North-East, one well-known, the other less so.   Those of a literary bent may also be able to identify the real-life model for “Emily”. 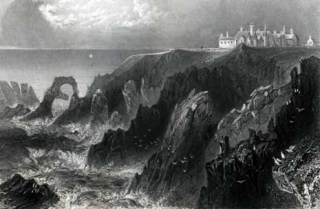 For some unknown reason, my sister and I used as children to spend a fortnight each summer with our decayed-gentry relations at Forsythe House, out in the back of beyond.   Like children everywhere, we took our surroundings for granted and thought nothing of the peculiar mixture of grandeur and squalor at Forsythe House.

Much the same was no doubt true for the various generations of Forsythes still living there.

The house itself was of a flamboyant baroque design, more appropriate to the sunny, smiling climate of Italy.   It was certainly not robust enough to stand up to the unrelenting wind and rain and alternating frost and thaw of the Buchan coast.   The surrounding estate and farmland had never been sufficiently productive to support such a grand household, certainly not after the advent of Death Duties and the agricultural depression of the 1920s and ’30s.   Domestic staff had to be ‘let go’, or were simply unobtainable.   In consequence, basic household repairs and maintenance had been neglected for years, even decades, on end.

Certain parts of the house were only in use during the summer months because of the deteriorating condition of the roof and the consequent spread of various kinds of rot and decay down through the structure and fabric, not least on the great central staircase and first-floor landings.   Door and window-frames had become warped and distorted, some now past being opened, but nonetheless allowing freezing draughts to penetrate.   The once-elegant reception rooms on the first floor, with their high, ornately-decorated ceilings and their tall sash windows rattling in the wind, were unbearably cold for much of the year; their matching pairs of fireplaces made little impact on the enveloping chill and damp, even back in the old days when servants were on call to drag logs, peat and coal up the back stairs and to attend to the warming flames.

During the severe winters and fuel shortages of the post-war years the Forsythes had tended to retreat to the gloomy basement kitchens, where huge cast-iron stoves and ranges consumed sawn-up branches from decayed or fallen trees scavenged from the surrounding forest and were kept burning night and day and all year round.   This was the only reliably warm area of the great house.

This was also where the cook and the few remaining servants had their television set – the only one in the house, naturally – with the result that the Forsythe ladies fell into the habit of slipping down the back stairs after dinner to sit with the domestic staff and watch Coronation Street and Opportunity Knocks, these odd little gatherings being illuminated only by the cosy orange-red glow from the stoves and range, reflected here and there in the greasy, smoke-blackened patina of the kitchen walls and ceilings.

we were both extremely conscious, even the first time we went there, of an oppressive sense of literally unbearable sadness

By the early 1960s, when my sister and I were making our regular summer visits, the Forsythes had virtually stopped using the first-floor accommodation and upstairs bedrooms altogether.

This was not simply because of the decayed and dangerous condition of the staircases, landings and upstairs corridors.

The sanitary arrangements for the bedrooms on the upper floor and attics had depended on commodes and chamber-pots, emptied each morning by the maids and domestics.   It was no longer possible to find young women from the village willing to do this kind of work, while the older family servants were not physically up to the fetching and carrying, upstairs and downstairs.   In consequence, the upstairs receptacles went unemptied for days, sometimes weeks, on end.

There was a similar problem with the various old gun-dogs which flopped and slobbered around the ground floor of the house, and which were either unable or unwilling to go outside in the cold of winter.   Carpets were fouled, and the mess was often left unattended to – and largely unnoticed – for weeks, even months.   In the old days, of course, the dogs would never have been allowed into the house in the first place.   As young children, we found all this hilariously funny, but, as we entered our teens, we became more prim and suburban in our attitudes towards personal and domestic hygiene, and came to resent the absence of proper bathrooms with showers and other modern conveniences.

We were left to roam about the house unchecked, risking our necks on the rotten staircases and landings.   My sister was a natural athlete and explorer; where she led, I followed.   But we preferred to avoid one of the bedrooms, always referred to by the Forsythe family as ‘Emily’s Room’, on the top floor of the west wing.   In itself, it was a pleasant enough room, of a sunny aspect, its attractive feminine décor still more-or-less intact.

the Forsythes were becoming so obviously weird and peculiar, their style of living so decayed and regressive, that our parents no longer felt able to entrust us to their care

The fact of the matter was that we were both extremely conscious, even the first time we went there, of an oppressive sense of literally unbearable sadness, of the deepest, most overwhelming sorrow and despair, which pervaded not only the room itself but also that end of the long back corridor, and the effect was that we tended thereafter to avoid the west wing altogether.

But we did find, inside a rickety old writing-table, a school exercise book, the property of one Emily Jane Forsythe, which contained various poems, draft versions of letters to a young man and assorted brief reflections, one of which has lodged in my mind ever since: “Perhaps it would be lonelier without the loneliness”.

We asked our Great-Aunt about Emily, as children would.   We were shown a faded, yellowed photograph of a radiant young girl – a distant cousin of ours – aged about eighteen.   We were led to believe that she had died not long afterwards, that Emily had suddenly been taken from us, like so many young people in those days, by one of the various killer diseases then extant; scarlet fever, consumption, diphtheria, whatever.

We did not find out the truth about Emily for some years, until what turned out to be our last summer at Forsythe House, the fact of the matter being that the Forsythes were becoming so obviously weird and peculiar, their style of living so decayed and regressive, that our parents no longer felt able to entrust us to their care.   Whilst wandering aimlessly in the mixed woods which year by year steadily encroached on the house and its grounds, we came across the old Forsythe family burial ground, apparently unused since the 1880s but for one quite recent interment, that of Emily Jane Forsythe, 1897-1959.   She had evidently died not long before we started our summer visits to Forsythe House.

Only then did our Great-Aunt tell us what had really happened to Emily.   She had been engaged to be married to a young man from one of the best local families, people of real standing and substance; the marriage would have transformed the declining fortunes of the Forsythes.   But it was the time of the Great War.   The young man had to go off to fight with his regiment in France, and, a few weeks later, was one of the sixty thousand killed on 1st July 1916, the first day of the Battle of the Somme.

The day the official telegram arrived at Forsythe House, Emily went up to her room in the west wing and shut herself away from the rest of the household.   And she never came out again, other than to roam the top corridor at night-times, howling at the moon like some kind of deranged animal.   As she had written in her exercise book, “Perhaps it would be lonelier without the loneliness”. And now, at last, we knew what our cousin Emily had meant.