With thanks to Keava McMillan, Jim Waugh and Nicki Machiavelli.

On Wednesday, 29th September, an exciting and thought-provoking event described as “Part call to action, part show, part club night”, was held in The Tunnels, Aberdeen. 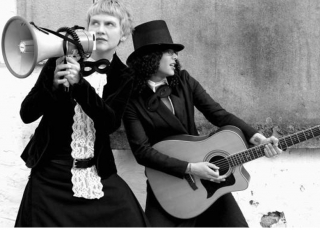 Organised by Keava McMillan and Jim Waugh, under the banner of “The Bird And The Ballerina Promotions”, Suffragette City aimed to bring together various left-wing political groups, local action groups, musicians and the public to share ideas, to inform and create understanding, and perhaps spark some inspiration.

In an age where political apathy is rife, and direct action seldom means more than clicking ‘like’ on Facebook, this promised to be a unique and unusual event.

The suitably underground venue of the Tunnels could not have been better for this attempt at injecting some excitement back into politics. A stage for guest speakers, numerous tables stacked high with pamphlets & an area outside the main room where points could be argued & issues debated.

Over the course of the evening a rapid succession of speakers and performance artists was introduced to the stage by compere Nicki Machiavelli.

This was a great opportunity to hear all manner of less established political views, with speakers from CND, Tripping Up Trump, Friends of UTG, Aberdeen Voice, The Green Party, Scottish Palestinian Solidarity, Cuban and Venezuelan Solidarity, Aberdeen Anarchists, the Scottish Socialist Party, The Communist Party and Unite Against Fascism. Speeches were limited to approximately five minutes on stage so there was never a time when any of them became tiresome.

If the aim of Suffragette City was to put politics in a more accessible and interesting light, then it was certainly a success

For many, the highlight of the evening was the Edinburgh based ‘Zorras’ – two witty, intelligent female performers who mixed poetry, singing and a megaphone to great effect. Their spellbinding performance brought the first part of the evening to a very satisfying close.

Rapunzel Wizard’s band ‘The Dog’s Botox’ delivered a lively and politically charged set  before the event was rounded off  as a club night until closing time to allow those in attendance the chance to mingle, to further discuss, or to just relax.

The mixture of political speakers with musical acts and poetry worked quite well as it blurred the boundaries between entertainment and politics. It was a fun and inspiring blend.

If the aim of Suffragette City was to put politics in a more accessible and interesting light, then it was certainly a success. It’s not often you come back from a club or gig feeling that you want to change the world.