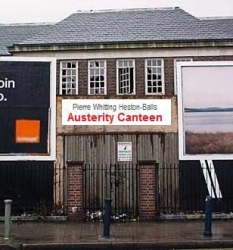 It’s amazing how many people think that life as a hard-nosed journo is all glamour and perks.

This hack, however, can tell you that that, most definitely, is not the case.

Until recently, the only ‘extras’ I ever enjoyed were getting home the same day I set off for work.

Imagine my surprise then, when I was summoned to see ‘the big chief’, aka the editor of this electronic rag.

I say ‘surprise’, but my initial reaction was one of terror and dread – that’s the way most of us newshounds react when summoned to the great man’s lair.

So there I was, quaking in my boots (well, Gucci loafers actually) as I arrived at our esteemed leader’s 5th floor eyrie and reported to Brunhilda, his secretary, executive minder and Amazon queen.

“Sit,” she commanded, pointing to a small waiting area, “and don’t dare move!”

I obliged and, after what seemed like a fortnight’s holiday with the family, she barked,

“That’s him free now” and pointed at the heavily armoured door which led the way to the head honcho’s hideout.

Taking a deep breath, I stood up and made my way, on strangely gelatinous legs, to the entrance to his lordship’s sacred retreat and my unknown fate.  As I approached the portal, it slowly opened to reveal a vast chamber at the end of which sat the nabob of this esteemed organ.

I was quick about it and hurried across the deep pile axminster to the majestic desk behind which he loured.  Fixing me with an icy stare, he idly flapped a glossy brochure and growled:

“OK Pittendreich, I need someone to go and check out Pierre Whitting Heston-Balls new eating place but Torquil McCorqudale, my regular critic, is down with a gippy tummy, something about a bad oyster or some such bloody thing.  Anyway – cut to the chase – there’s no-one else so it’s got to be you, God help us!”

Talk about a bombshell. I was rendered almost speechless and could only croak out a weak:

He appeared to have anticipated my question as he barked:

“As soon as poss, man, which means bloody NOW!

“Brunhilda’s got travel documents to get you and Mrs Plunderteeth down to Gargunnock – pick them up as you leave.  Now I’ve got work to do so …”

So saying, he dismissed me with a flap of his hand and, as I exited the editorial control centre, his amanuensis handed me a brown envelope as she told me:

“There you go – two Stagecoach tickets to Stirling, where you’ll need to change ‘buses for Gargunnock.  You’ve got a 7.30 reservation at Mr Heston-Balls’ restaurant and, as this is an under-cover job, your booking’s in the name of Smith and you’ll need to pay cash.  Got that?

You’ve also got a double room booked at Mrs McLaverty’s B&B – we’ve used her before and she demands payment up front.  Make sure you get receipts or your claim for exes won’t be sanctioned.

“That’s it Plenderleith, on your way and don’t let us down or you’ll have me to answer to.  OK?”

I’ll skip the intermediate bits like ‘phoning the good lady wife and pleading with her until she eventually agreed, albeit unwillingly, to accompany me, the deprivations of a Stagecoach ‘bus trip and the, highly-debatable delights of Mrs McLaverty’s doss … er, boutique establishment.  Suffice to say that, suitably dressed – Euphemia wore her new twinset and tweed skirt – we presented ourselves at the gastronomy master’s four star Austerity Canteen a few minutes before 7.30.

The award winning chef’s latest venture was inspired, I read in the menu, from his deep conviction that we all need to economise if we are to weather the current economic recession.  To that end, the proprietor had brought in his crack team of interior designers to create an ascetic wilderness in what was once the local benefits office and the final result is simply breathtaking.

The menu notes further reveal that they had invited some local youths to spend an evening attacking the walls with sharp implements in order to obtain a genuine distressed look.  They also employed a squad of folk scouring the country for anything old and battered that could be used in the eatery – from tables and chairs to cutlery and kitchen equipment that had seen better days.   And what they’ve achieved has a truly authentic ambience of deprivation and financial hardship.

But on to the menu itself which, true to the general theme of this cordon bleu bistro, offered an extremely limited choice, an aspect which went down very well with Mrs P who abhors making decisions.

For starters, my dining partner opted for the Scotch broth, made from an old Scottish recipe consisting of a few chopped vegetables left to marinade overnight in a dram of whisky.  I, on the other hand, went for the old traditional failsafe of a Scotch salad, in this case comprising a lettuce leaf, 2 slices of cucumber, half a tomato and a tablespoon of grated carrot.

Following the appetisers we were both keen to get our teeth, quite literally, into the mains for which my colleague plumped for the mini all day breakfast.  This comprised two chipolata sausages, a couple of quarter rashers of bacon, a brace of fried quails eggs and a button mushroom drizzled with a ketchup jus.

My choice, on the other hand, was the vegetarian dish of le pain grillé avec les pâtés, which was revealed as a piece of toasted bread topped with a scoop of alphabetti spaghetti.  We washed our interesting feast down with a bottle of the house wine, a cheeky little liebfraumilch which, the sommelier told me, could be picked up for just over £3 a bottle in Tesco.

Our main course over we were excitedly anticipating our puddings when our waiter brought us bad news.  It turned out that the container van that delivers the creamed rice to the Stirling Lidl had been involved in a motorway pile up so the only sweet available was fruit salad with lait d’carnation.

My other half asked if the fruit salad was fresh and, after checking with the kitchen staff, our waiter was able to vouchsafe that, not only was it fresh, but the tin hadn’t even been opened yet.

By the time we had greedily devoured our dessert it was still early – barely 8.15 – so we decided to skip coffee and explore the sights of Gargunnock before returning to Mrs McLaverty’s.

As I settled the £236 bill I realised that we had just had an experience denied to so many in these cash-strapped times and, as I said to herself while we strolled through the town:

“I think this is the best fish supper I’ve ever eaten!”