Educate or Unfriend? That is the Question … or at least one of the questions to which Duncan Harley explores possible answers. 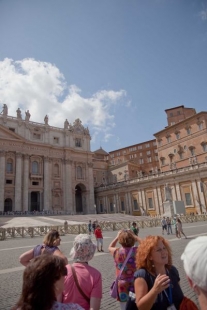 Unless you were a resident of that far off planet Mars, it would have been difficult to avoid all the media coverage regarding the events surrounding the recent election of Pope Francis.

The radio and television news fed a constant stream of comment interspersed with iconic views of the Sistine Chapel chimney emitting various shades of smoke according to how the latest voting had gone plus interviews with commentators explaining the secret voting process and providing background information to what is a fairly major event for the estimated 1.2 billion Roman Catholics in the world.

The Catholic Church claims just over four million members in England and Wales and another 695,000 in Scotland.

Out of a total UK population of about 60 million, that means about one in 12 people in Great Britain and around 7.5% of the population of Scotland are Catholic. Significant numbers indeed!

On the day after the election of the new, media coverage of course switched to new topics such as the upcoming budget in the UK and the rather unusual decision by the Cypriot Parliament to commit economic suicide by imposing taxes on bank deposits.
The tabloids and broadsheets of course lagged behind by one day since the nature of printed news means that it is often out of date even as the presses are running.

Newspapers such as the Guardian ran with “Buona Sera, Pope Francis” as a leader and Aberdeen’s Press and Journal somewhat predictably led with “Crashes and chaos as thick snow sweeps in” under a banner reading “Hats off to the ladies” and “Fun times roll for Olly Murs”

Then social media sites such as Facebook began to fill up with posts referring to the new pope. Some were polite and informative, some were humorous but good mannered and some were very nasty indeed.

The first two categories I think are generally acceptable in that comment and humour go hand in hand with democracy and hopefully informed debate. The latter kind of comment is simply unacceptable in any civilised country. I suspect that the “unfriend” button on many folks walls may need replacing following unexpected comments by folk they thought they knew.

The UK and indeed Scotland have many ethnic and religious minorities and from time to time evidence of bigotry emerges against many of these. Immigrants, blacks, Jews, gays and Muslims all get the odd verbal battering from the misinformed within our population. 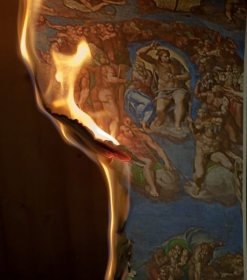 Bigotry can be defined as the state of mind of a bigot. Someone who, as a result of their prejudices, treats other people with hatred, contempt and intolerance on the basis of race, gender, sexual orientation, gender identity, national origin, religion, language or socio-economic status.

In an attempt to address such issues we in Scotland have the much criticized “Offensive Behaviour Act” covering football grounds, public places and pubs and clubs.

It’s difficult to evaluate the success or otherwise of such legislation, but at least the existence of the act recognises that there is, or has been, a problem.

In addition the UK press is now likely to adhere to certain standards when publishing news and comment or face the wrath of the courts. Leveson for all its failures in implementation has at least exposed certain segments of the press to severe scrutiny.

But what about the internet?

The net is an area largely ungoverned and uncensored. There are systems in place which allow censorship, and recent closures of file sharing sites point to the fact that where money is involved, sites can be closed down. The blogosphere in particular is awash with individuals and organisations commenting on anything you could possibly think of and indeed lots of things you had never even thought of!

There is a quotation attributed to Herman Goering which reads as follows:

“it is the leaders of the country who determine policy, and it is always a simple matter to drag the people along, whether it is a democracy, or a fascist dictatorship, or a parliament, or a communist dictatorship. Voice or no voice, the people can always be brought to the bidding of the leaders. That is easy. All you have to do is to tell them they are being attacked, and denounce the pacifists for lack of patriotism and exposing the country to danger. It works the same in any country.”

If you look at the internet in the light of the above quote it should be clear that the ball game has changed big time and that the masses now have a very loud voice indeed. The London Riots and the Arab Spring have in their opposing ways proved the point that social media is a powerful force for action and change. Neither would have been likely to have gained momentum without the communication means now available to ordinary folk.

Gone are the days when a slogan painted on a wall proclaiming “No Proddies Here” or “English Out Remember 1314” was a call to action or intimidation and thank goodness indeed.

The laptop and the mobile phone can reach out across the globe though. It would be a shame if the folk who write and digitally publish poisonous and inflammatory content caused a contraction of freedom of expression via censorship.

The motivations for censorship can of course range from well intentioned desires to protect children from unsuitable content to authoritarian attempts to control a nation’s access to information. No matter what the censors’ reasons are, the end result is the same: access is denied to “unsuitable content”

Internet censorship isn’t just a parental or governmental tool. There are many software products on the market designed to limit or block access to specific web sites. Most people know these programs as Web filters. Censorship opponents have another name for them: Censorware.

The internet may be a crucial stage at present. Control of content is still largely in the hands of the users. However if we allow the offensive content to increase it is certain that censorship will increase and possibly at a very fast rate.

“The mind of a bigot is like the pupil of the eye; the more light you pour upon it, the more it will contract”

“The door of a bigoted mind opens outwards so that the only result of the pressure of facts upon it is to close it more snugly.”

I don’t know which view is correct but it might be time to reflect on whether to “unfriend” or try to educate the bigots of this world.