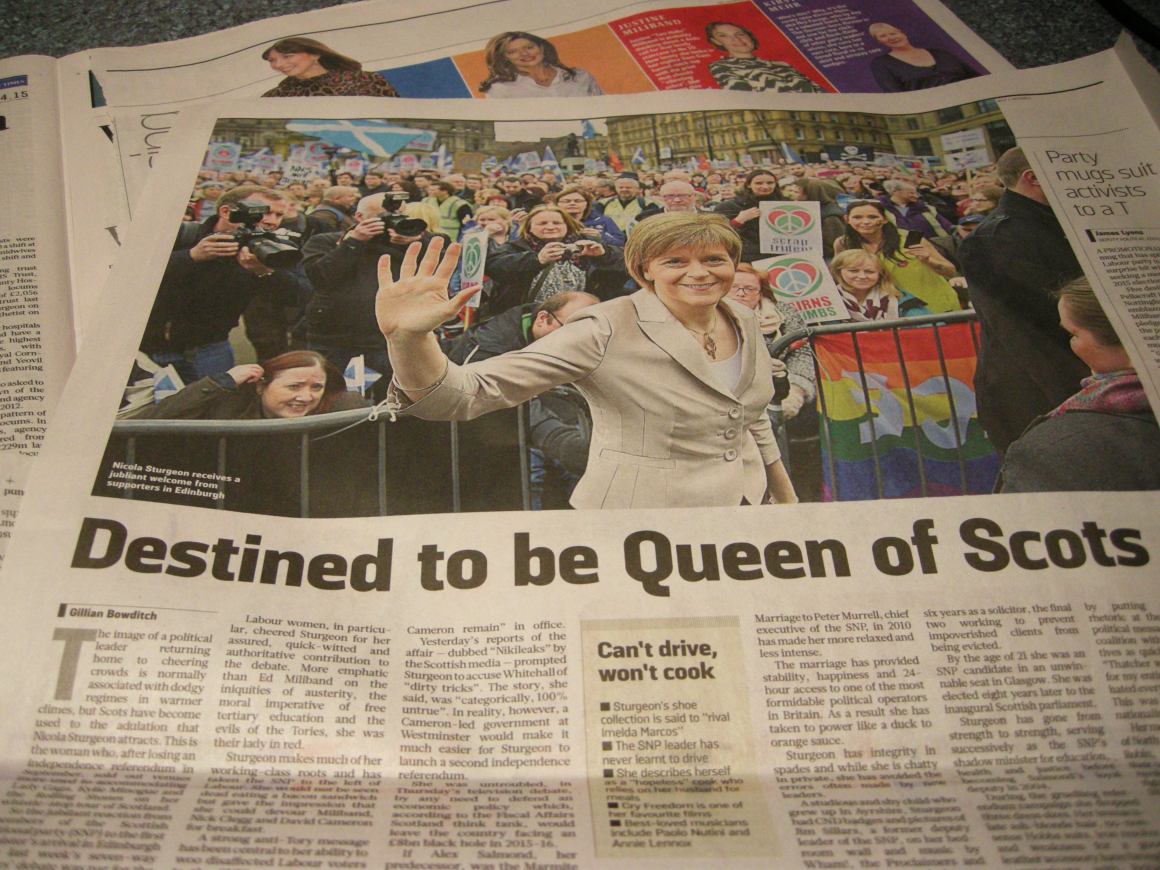 In an unprecedented piece of vitriolic pre-election political propaganda, the Sunday Times (April 5th) has headlined on Nicola Sturgeon’s shoe collection and her sisters job as a phlebotomist. The Header on page 14 reads “Destined to be Queen of Scots”– who famously got her head chopped off -alongside an image of the Scotland’s First Minister waving to the cameras in Glasgow.

In the background, smiling folk take photographs and a few hold up protest banners suggesting the scrapping of Trident.

Everyone, and I include the assembled press, is smiling but there is no suggestion of a light hearted wee joke in the Times article by columnist Gillian Bowditch.

Seemingly Ms Sturgeon can’t drive, has a huge collection of shoes and is a hopeless cook. She watches “City Freedom” whatever that is and likes Annie Lennox – don’t we all?

Monstrously the First Minister dropped three dress sizes during the Scottish Referendum and her father Robin was a working class electrician.

The article compares Scotland to some “Dodgy regimes in warmer climes”, a clear reference to the de-stabilising of that Arab Spring by the US and the Western Powers.

Seemingly Nicola was “politicised” by nationalists and “like Margaret Thatcher can get by on five hours sleep a night”. This despite MS Bowditch’s assertion that Ms Sturgeon “hated everything that she (Thatcher) stood for.”

Getting it both ways is the prerogative of the stupid.

With comments suggesting that Sturgeon’s sister was a phlebotomist and quotes from “One SNP councillor” saying that – and he has known her for years – “Whatever she wants, she get’s. They don’t call her Nasty Nicky for nothing. Don’t stand in her way or you’ll regret it” there is at least some vitriol in the Times piece.

So who is this Gillian Bowditch lady?

A quick check on Google reveals 13 people in the UK with the name Gillian Bowditch and advises digital searchers to click to find personal data about all thirteen.

Which one could she be?

Seemingly however the real Gillian may well be a tabloid journalist who penned an article about a “Gay contender for mayor expecting baby with lesbians” in the Times of January 18th 2015.

“IVAN MASSOW, the gay entrepreneur hoping to succeed Boris Johnson as London mayor, is having a baby with a lesbian couple and plans for the child to divide his or her time equally between two households.”

““Having a child is something I really wanted to do for so long and if I don’t do it now, my chance is over. There is never a right time in anyone’s life. It’s one of these things I just have to do,” said Massow, 47, whose baby is due in August.

“Over the past year, the businessman, estimated to be worth £40m, received offers from lesbian friends to have his child, but decided to turn to a co-parenting website.”

To read the full article on-line the Times asks for money and many will feel that it is money spent unwisely.

As for the original printed article about Nicola, apart from a very few library copies, it’s where it should be – in landfill.