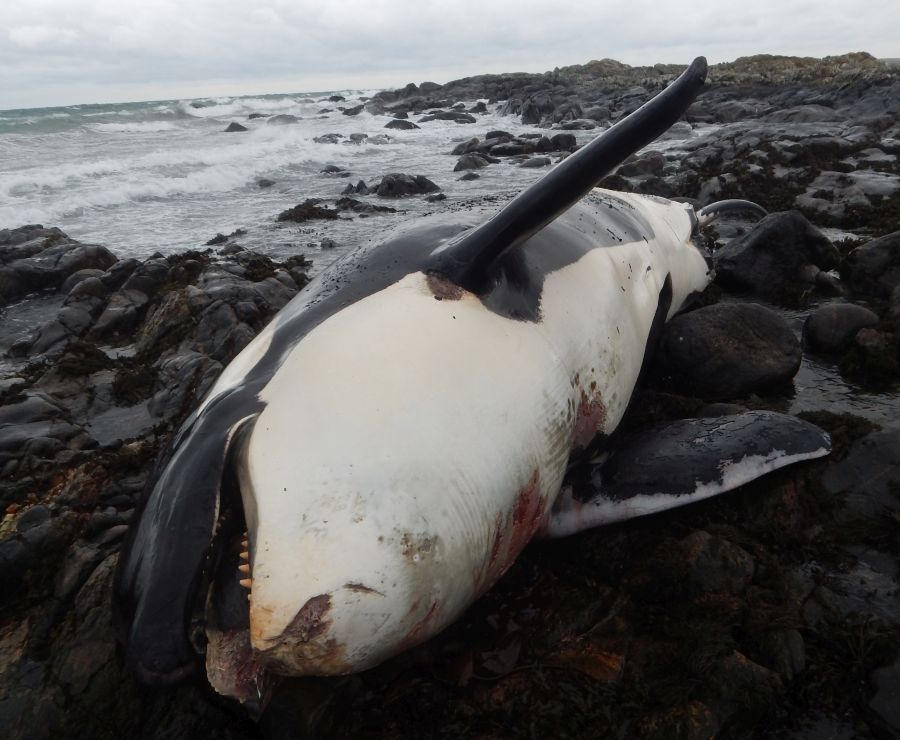 With thanks to Morven Russell, Volunteer Coordinator, Hebridean Whale and Dolphin Trust

A killer whale found dead, stranded on Tiree on 3 January has been identified as ‘Lulu’, a member of the West Coast Community of orcas. This small and well-known group is Britain and Ireland’s only known resident population of killer whales and is feared to be at risk of extinction. They are unique in this region in that their diet primarily comprises other marine mammals.

A second type of killer whales are occasionally seen in these waters, but these feed primarily on fishes and seals and are far more wide-ranging, e.g. between the Hebrides and Iceland.

The identity of the animal was confirmed this week by Dr Andy Foote, an orca specialist and Dr Conor Ryan of Hebridean Whale and Dolphin Trust. Using photos from the Trust’s photo ID catalogue the pair were able to identify Lulu from the distinctive eye and saddle patches which are unique to each individual.

Photos taken of the stranded orca by John Bowler, RSPB Scotland Tiree Officer were crucial to allow HWDT to identify the animal.

“It is particularly sad to know that another one of these killer whales, unique to the British and Irish Isles, has died. There may be as few as eight individuals remaining in this population, which has not produced calves since studies began.”

Hebridean Whale and Dolphin Trust has been studying orca in the Hebrides using photo ID, since 1992. Lulu was last photographed by the charity from its specialised research yacht Silurian off Waternish, Isle of Skye in July 2014. During this encounter she was seen with a large male, John Coe and another female named Moneypenny.

The Trust encourages members of the public to join them aboard Silurian to help monitor cetacean species found in the Hebrides – recognised as one of the most diverse marine environments in Europe.

“It is very sad to lose a member of this unique group. There are lots of potential contributing factors, many of them man-made. It may also be part of a very natural process. By making this link between a stranded animal and its source population it makes it possible to investigate these factors.

“It highlights the importance of the Hebridean Whale and Dolphin Trust, the Scottish Marine Animal Strandings Scheme and the members of the public that help by providing sightings, photographs and reporting strandings.”

The Scottish Marine Animal Strandings Scheme are hoping to conduct an examination of the animal in the next few days which might shed light on the cause of death.