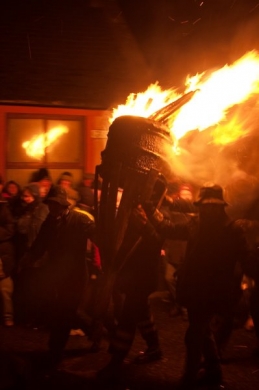 Like many of our readers I’m sure, it is with mixed feelings that I take down the tree and pack away the baubles and tinsel. The old year is out, and the new one is suddenly almost a week in the making. For better or worse, normality returns and all the fuss is over for another year. Or is it?

In the Northeast village of Burghead in Moray, residents are looking forward with anticipation to their own unique annual Hogmanay celebration. Condemned in the 18th century by the church as  “an abominable, heathenish practice”, the Burning Of The Clavie is surely one of Scotland’s most bizarre and spectacular events.

The event takes place on 11th of January every year – or the 10th should the 11th fall on a Sunday – in correspondence with what was the last day of the year before our calendars were changed in 1660.

To summarise the event as simply the carrying of a burning barrel through the town fails to convey the deep-rooted and elaborate nature of the ceremony.

Fire has strong associations with Hogmanay.

From the symbolism of a single lump of coal as a first footing gift to wish comfort, health, and/or luck – or in other words the wish that the recipients ‘lum may aye reek’ – to the extravagance of the Edinburgh Fireworks display, The Burning Of The Clavie has more in common with the former, but with detail, ambition and meaning more in common with the procession of the Olympic flame.

The ceremony commences on the night with the clavie itself – a half barrel full of woodshavings and tar, which is nailed to a post. It is believed by some that the same nail is used every year. It is carried, borne on the shoulders of a single male resident to the home of the Burghead provost so that he can light the clavie with embers from his own fire. The flaming barrel is carried in turn by around 10 men, clockwise around the town, and embers from the barrel are presented to homes/households of significance.

The clavie is then carried to the ‘clavie stone’ – believed to be the altar of and old fort on Doorie Hill, where it is set down, and more fuel is added until the whole hillside is set ablaze.

The ceremony, in a manner similar to many rituals around the world, across faiths, and throughout the ages, is completed as attendees take away embers from the fire to light their own home fires on ‘New Years Day’ symbolising perhaps the cycle of life, renewal, the passing of cold winter and the promise of spring, or simply as the tradition dictates – for good luck.