‘Such a night….’ sang New Orleans giant of voodoo, Dr John. Indeed it was. Voice’s David Innes reports from The Blue Lamp where The Night Tripper’s fellow Crescent Citizens Meschiya Lake and the Little Big Horns sang, blew, rattled and Lindy-hopped their way into a packed Lampie’s hearts. 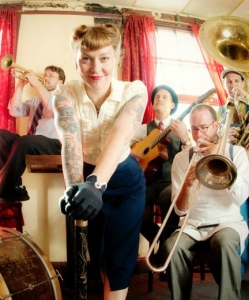 The loch that gave the street behind the Gallowgate its name is long gone, yet it seemed that a little of Lake Ponchartrain’s warm muddy waters had seeped through the antique brickwork of a beloved venue that has seen its fair share of memorable shows. This was among the best.
Sandwiched between a rousing swing opening treatment of Miss Otis Regrets and a hectic, passionate encore Hey Good Lookin’ – Hank sure never done it this way – was a mesmeric aural and visual performance of blues, swing, jazz and a dozen minor genre request stops on the way.

Meschiya’s presence is remarkable. Surrounded by a band of stellar players, all eyes are drawn to her. Yet there are no shape-throwing histrionics; her visual and vocal dominance alone fill and control the room.

She has a voice of considerable power, but it is not all gritty blues shouting, although Electric Chair Blues was a particular highlight. She croons, purrs, testifies and, in Lucky Devil, confides, ‘I am no angel, my wings have been clipped…I’d like to burn with you’. I suspect that this is what Julia Lee shows were like.

And the Little Big Horns? These are remarkable players, all seated but leader and sousaphonist Jason Jurzak, who wore his instrument like a boa constrictor, its halo-like horn offering an alternative visual attraction as it towered leviathan-like over the band, its operator blowing bottom end tones as a subterranean bedrock.

Whilst trumpet, saxophone, clarinet and acoustic guitar enmeshed as accompaniment for Meschiya, they each took regular passionate diaphragm and finger-straining solos. These are artists at the top of their game and visibly savouring every joyous moment.

Out front, Lindy Hoppers Chance Bushman and Amy Johnson jived and jitterbugged, tapped, strutted and danced what looked like sensuous-heavy variations of the tango, occasionally bringing in the singer who demonstrated that her feet are as talented as her larynx. This wasn’t a gig, it was a show, a monstrous show.

That the normal placid Aberdeen audience roared its appreciation gives measure of the reception this ensemble demanded and which seemed genuinely to astound them. Trumpeter Ben Polcer asked, in obvious bewilderment at one inter-song reception, ‘Are you ALWAYS this fired up on a Tuesday night?’ It wasn’t quite Mardi Gras, but it was Mardi, Ben.

They have promised to return. Start queuing now.

When Meschiya Lake and The Little Big Horns flew in from Louisiana for their first ever UK tour earlier in 2012, they confirmed their reputation as one of the hottest acts on the American roots music circuit, playing to capacity audiences everywhere they went. With thanks to Loudon Temple.

During Glasgow’s Celtic Connections festival, a thousand revellers turned out at the band’s Old Fruitmarket show. Reviewing their gig at London’s Dingwalls, Rachel Devine told readers of R2 magazine this was:

“one of the most entertaining live bands on the planet.”

“One of the big hits of this year’s Celtic Connections,” adding “they just set the festival alight.”

And, after filming footage for their new series in New Orleans, The Hairy Bikersdescribed the band’s music as:

“Prozac for the soul!”

No doubt audience curiosity was aroused by the 2011 album Lucky Devil which received glowing reviews on its UK release, although the live shows are even more flamboyant and exciting. 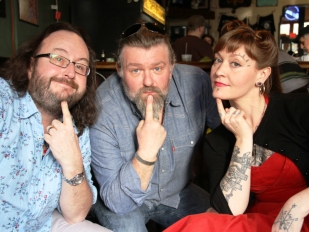 Local connoisseurs can see what’s causing such fuss when Meschiya takes her band to The Blue Lamp, Aberdeen on September 4.  She will be accompanied, as she was earlier this year, by Chance Bushman and Amy Johnston, two of the world’s top Lindy Hop exhibition dancers, who tour the globe to participate in major competition events and dance camps from Brazil and Canada to Scandinavia.

Meschiya says she and her highly entertaining entourage are excited to be heading for Aberdeen.

“We have good friends, among them The Wilders and The Wiyos, each of whom have played Aberdeen in the past and they tell us that we can look forward to one of the best audiences Scotland has to offer. We love nothing better than to be turning it on for an enthusiastic crowd and we’ll make sure that everyone has a ball.”

As for The Hairy Bikers, there was never any question that they would enjoy Meschiya Lake and The Little Big Horns’ music and sassy style. On a recording recent visit to New Orleans, they headed straight to The Spotted Cat in the Big Easy’s French Quarter to film the band in action and have a chat with Meschiya.

You’ll see the outcome when the new series is screened from 19th August (8pm) on the Good Food Channel, Meschiya was named Female Performer of The Year in the 2011 Big Easy Music Awards and repeated this success in 2012. A new album is being released later this year.