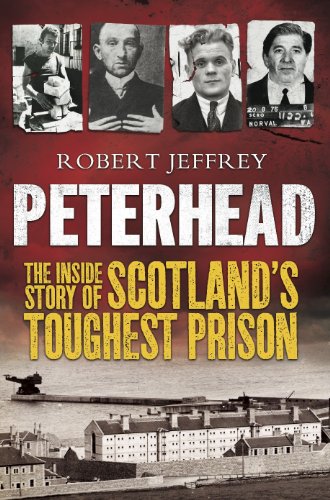 Who’d have thought that Scotland’s most notorious prison was founded for altruistic reasons?
This altruism was not connected with any soft notions of prisoner rehabilitation or second chances in the grim 1880s. Rather, it was the Blue Toon’s geographical situation that brought about the establishment of those grim grey blocks.

The dangers to shipping, including whale boats, during unrelenting North Sea winter storms, and the losses incurred, one suspects, of revenue as well as the rather more expendable human life, were well-known.

Calls were made for a Harbour of Refuge to be built on the corner of NE Scotland to which shipping could head for safety when weather asserted its mastery over the flimsy human-built vessels daring to challenge nature.

And how best to provide cheap labour for this large-scale engineering and construction task? First you build a prison, then you put the convicts to work. You can’t make an oubliette without breaking rocks, it seems.

Jeffrey’s narrative describes the back-breaking, morale-destroying toil involved in constructing both prison and harbour, the latter task taking until 1954 to be completed, 66 years after the prison opened, and locked very quickly, its doors for the first time.

The main narrative, however, tells the tales of some of Peterhead’s more famous occupants, career criminals, casually-violent conscience-free gangsters, sex offenders and other dangers to society.

The names of Paddy Meehan, ‘Gentle’ Johnny Ramensky, TC Campbell, Jimmy Boyle and Oscar Slater are legend. Jeffrey looks behind the often lurid and prurient headlines and popular mythology built around the household names among the incarcerated, and punctures some myths whilst upholding others.

Meehan, for example, whilst framed for a murder committed by McGuinness, was a habitual criminal and his pathos-ridden demise following his pardon and release is almost sad, until you remember the misery he caused during his period as an active criminal.

Ramensky, on the other hand, comes in for more sympathetic treatment, the author almost admiring his athleticism, barrack-room lawyer articulacy, efforts to right injustices within the system and resigned acceptance of his fate on every recapture.

Jeffrey describes, using eye-witness details, the series of riots and prisoner rebellions that have marred ‘The Hate Factory’, including the swift SAS action taken to end the riot and release a warder hostage in 1987. It’s scary stuff.

Whilst the grimness and often-squalid conditions within the jail are always in the background and its harsh, inhospitable location a constant reference, there is room for humour, often cruel, but at times ingenious. Jeffrey relishes describing how long-term guests of Her Majesty would relieve the boredom, almost admiring the simple but audacious scams and practical jokes perpetrated by otherwise hard, desperate men.

This may be the biggest human tragedy of all, obvious intelligence and resourcefulness ultimately wasted on lives of crime and long periods of non-productive incarceration. The author, in juxtaposing institutions where rehabilitation and preparation for reintegration to society are the aims, poses questions that are relevant even in the more enlightened UK prison regimes and culture of the 21st century.