Voice’s Alex Mitchell takes readers on a tour of Aberdeen offering a snapshot in time with regard to the appearance, condition and history of some of the city’s streets, features and buildings. 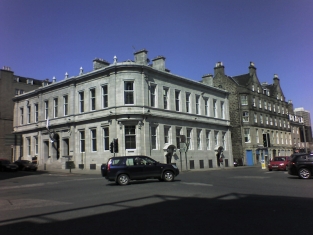 Saturday 19th May 2012:
The first sunny day for ages, so  I left the car at Union Square and went for a wander.  The handsome Archibald Simpson building (former Employment Exchange) at the north-east corner of the Market Street & Virginia Street crossroads has been stone-cleaned to useful effect.   Similarly the Tivoli on Guild Street has benefited from its restoration.

More stone-cleaning is being undertaken on the Carmelite Hotel on Trinity Street. The rectangular enclosures along Carmelite Street are now filling up with shrubs. 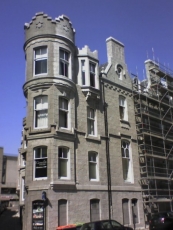 The trees planted along both sides of Rennie’s Wynd are taking hold now and doing their bit to enhance this otherwise fairly grim length of streetscape alongside the Trinity Centre car park.

Similarly the former butcher’s shop next to Correction Wynd and the large former sportswear shop on the south side.

Café 52 seems busy, but otherwise few people to be seen at 2.30 pm on a sunny Saturday. 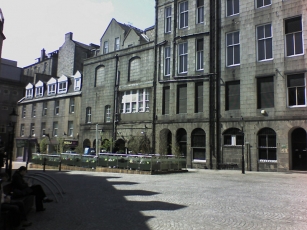 The south side of the Green is already in deep shade. The Green and the surrounding area are characterised by very tall buildings and narrow streets and wynds, the unfortunate effect of which is to shut out the sunlight in the afternoons, even in the summer months.

Along Hadden Street. The trees planted in the rectangular enclosures alongside the Aberdeen Market are now protected by elegant & substantial black wrought-iron tree-guards, which create a welcome impression of regularity and symmetry.

Similarly the Rox Hotel up ahead on Market Street, its 1845 Archibald Simpson premises and frontage elegantly restored. 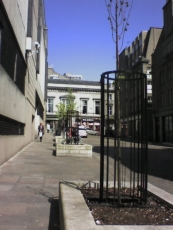 But the Market Arms pub at the corner of Hadden Street & Stirling Street is looking very shabby these days.

Down Market Street and along Shiprow Lane.

On Shiprow itself, the Ibis Hotel and the huge office development beyond, apparently still unoccupied.   The lights are on, but nobody is at home.

Across Union Street and along Broad Street.   The restoration and stone-cleaning of Marischal College really show up to good effect on a sunny day and the statue of Robert Bruce is also highly effective.

The restored Marischal College has become the ‘iconic’ backdrop of choice for any TV news item about Aberdeen and it does our town credit. 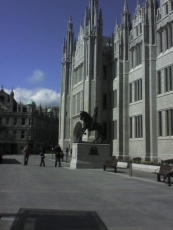 Along Gallowgate.   The BrewDog premises in the former Marischal Bar have become something of an institution, an unusual case of a pub actually being improved by a change of ownership.

Down Littlejohn Street, across King Street and along East North Street to the Castlehill roundabout.

We lost the Timmer Market car park some time ago, to the huge disadvantage of businesses & residents in the Castlegate, and now the East North Street car park is closed down and being redeveloped as part of the new Health & Care Village on Frederick Street.

Nobody much in the Castlegate – a clutch of alkies are disporting themselves between the Sally-Ann and the Portals Bar, not doing anything particularly exceptionable, but hardly conducive to the ambiance of this historic locale or its tourist-related potential. 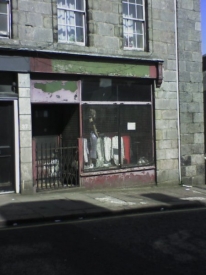 Down Marischal Street – a spectacularly dilapidated shoppie just up from the bridge over Virginia Street, still with its window display from about 30 years ago.   Back to Guild Street, where the forecourt of the Union Square complex seems to have become the favoured place for kids to hang out and drop litter.

Holburn Junction – the premises of the former Beluga café/bar are now occupied by a Sainsbury’s Local, directly across this end of Union Street from a Tesco Metro in the former Bank of Scotland premises.

It seems that conversion of pubs into supermarkets does not require planning permission for change-of-use, and there are a lot of redundant pubs these days.

These new small supermarkets are the one positive development in High Street shopping locales these days, being convenient of access and encouraging people to walk to their local shops and on a regular basis instead of driving to an edge-of-town superstore once a week or so.

Out the Lang Stracht to Dobbie’s Garden Centre on the western outskirts of the city.   The Garden Centre incorporates a substantial retail operation including books & magazines, leisure/outerwear – frankly, most of the togs a chap needs – plus a cafė/restaurant, delicatessen, butcher, baker etc.

Garden centres have a fairly banal image, but one can see the attractions of free & accessible parking, a clean, well-maintained environment, decently-behaved customers, clean toilets – it is easy to see the appeal compared with going into town.   And it’s somewhere to go in the car, and not too far away.

The danger is that Dobbie’s  may be the thin end of a wedge deployed to justify further retail development, followed as surely as night follows day by proposals for residential development and inexorable urban sprawl whilst retail activity continues to drain out of the city centre. 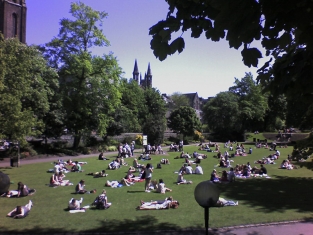 Saturday 26th May 2012:
Brilliantly sunny weather all this week.
Left the motor in the Denburn car park and walked down past His Majesty’s Theatre, under the Denburn Viaduct and into Union Terrace Gardens – full of people, many with small children – this is one of the very few down-town locations where kids can be allowed to run about without fear of traffic.
And not an alkie or smackheid in sight.

The 78 large mature trees are looking wonderful just now.   Every aspect pleases, other than that of the Triple Kirks, its crumbling tower & spire now further enhanced by unpainted wooden boarding to shut out the peregrine falcons which were nesting there until recently.

The peregrines are a top predator, indicative of a whole food chain of wildlife species below them.

Belmont Street is full of people, checking out the monthly Country Market.   On the brow of Schoolhill, looking towards Marischal College, where the Mitchell Tower is now conspicuously dirty-grey and unrestored.

This view of the College has been obstructed these last 40-odd years by the jumble of concrete rubbish at the Upperkirkgate end of the St Nicholas House complex – the octagonal structure, the long-redundant Post Office and the untenanted shops.   Into St Nicholas Kirkyard via Back Wynd.   Clumps of bluebells between the gravestones.   Lots of people enjoying the tranquillity. 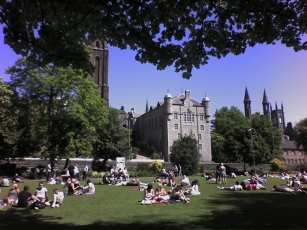 The anti-social element seems to have moved to the Castlegate these days.

To the Oxfam Bookshop, the last second-hand bookshop remaining in Aberdeen, where I obtained Misha Glenny’s magisterial history of the Balkans @ £3.99.

Bookshops and record shops used to be a principal attraction of town centres and High Streets, a reason for going into town, and now they’re almost all gone.  What, if anything, will replace them?

Back over Union Bridge and down through the Gardens; again, every aspect pleases – the granite balustrading, originally matching that on both sides of Union Bridge, the Tuscan-style palazzi along Union Terrace, the statues of Edward VII, a.k.a. Edward the Caresser, Rabbie Burns, Prince Albert and William Wallace, and the wonderful and truly iconic vista of His Majesty’s Theatre up there on the Viaduct.