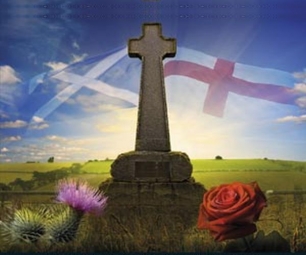 Amid all the rather grisly preparations to commemorate, aye that’s right, commemorate, the outbreak of The Great War next year and the undoubted attempts by the possibly-misguided to conflate the 700th anniversary of Bannockburn in 2014 with the Referendum, the 500th anniversary of the Battle of Flodden in September 2013 has all but been overlooked.

We were told about Flodden in school, when Proper Mannies’ history was taught, but this was a cursory mention, possibly because we were beaten, in the chauvinistically-patriotic tapestry of Miss George’s best attempts to apprise us of our backstory, following the gory glory of Stirling Bridge and Bannockburn.

In later years, over pints in the Prince, the trusties and I have often mused on why James IV elected to give away home advantage by charging down the hill and why it seemed he elected to put the sixteenth century equivalent of CND members and the forebears of the Greenham Common women in the striking positions upfront.

He didn’t of course, but he got it wrong, as the splendid and concise sleevenotes by Jim Paris explain.

The battle was needless anyway. James felt he was beholden to the Auld Alliance and sought to draw English forces away from an ongoing conflict with our French allies.

There was little need; there was no compulsion. Just like Blair and his slavish devotion to Bush’s barely-disguised war for oil in 2002 and 2003. Even tactically, the king erred. History tells us that from a strong strategic position on a hill, impregnable to the English army below, battle was joined in the hollow and the slaughter ensued.

On a much larger scale, the errors and assumptions of the pre-charge Somme onslaught in 1916 repeated James’s error. The king himself and significant numbers of Scotland’s nobility died at Branxton on 9 September 1513. Estimates say that around 9000 soldiers perished with them, a considerable number of Scotland’s youth and young manhood, who had been well-equipped and fit.

In 1940, it is said that there was hardly a family in NE Scotland not directly affected by the extirpation and capture of the 51st (Highland) Division at Dunkirk, and more especially, St Valery-en-Caux.

George Santayana’s words, re-interpreted by Churchill,‘Those that fail to learn from history, are doomed to repeat it’ ring ever more true.

Pipers Hill, where the English forces gathered has a simple granite cross, inscribed ‘To the brave of both nations’, to remind us of something from which future leaders might have learned. So, The Flooers O’ The Forest were all wede away. How well does Greentrax mark this painful and anguished turning point in Scottish history?

Emotion has no bar code, no best-before date

The label itself says, ‘The album is dedicated to the memory of all those who fell on the bloody battlefield in September 1513. We hope it is a fitting tribute’. It is. With contributions from Dick Gaughan, Karine Polwart and Archie Fisher this was always going to be a stellar release.

The cast of lesser-known artists also impresses. Try the lusty natural chorus of the children of Drumlanrig and St Cuthberts Primary School, Hawick, reminding us of the tale of The Bonnie Banner Blue, to the accompaniment of what sounds like the assembly hall piano, the soft rock of New Zealander Steve McDonald’s Flodden Field and Lord Yester with Lau supporting Ms Polwart in expressing national grief and denial in personal terms.

The title track features more than once, of course. It has resonated in the Scottish psyche for centuries and does not date. Emotion has no bar code, no best-before date. Dick Gaughan’s timbrous, resonating version must be among the best committed to any recording medium. It harnesses grief, resignation, anger and bitterness in an emotional and melodic tour de force.

Flooers o the Forest is our blues, our St James Infirmary our House of the Rising Sun, yet its almost nihilistic bleakness offers no hope of redemption. Does that not tell a story of Scotland with which we’re all familiar?

Greentrax makes no apology for including it in different guises, nor does the label apologise for featuring a pipe tune that is jealously and respectfully reserved by pipers for funerals and other mourning occasions.

With the added-in bonus of a CD of poetry and verse read in the stentorian and dramatic tones of Iain Anderson, John Shedden and Alastair McDonald, the full scope of the tragedy and its needless enactment is laid bare.

There are wonderful moments here, where the myths, superstitions and gory realities of Flodden echo down half a millennium, as chilling now as they were in the days when the memories were fresh and the needlessly-spilt blood in that silent Northumbrian field still warm.