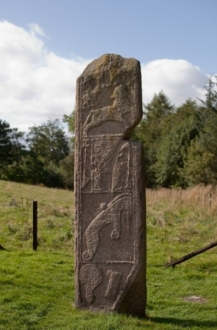 What’s in the Box?

For reasons best known to herself the daughter of the Laird of Balquhain made a bet with a stranger that she could bake a batch of bannocks in less time than it took him to build a road to the top of Bennachie.

Of course the stranger was the devil himself and on losing the bet he turned the unfortunate lady to stone as she fled from his advances.

This late Pictish monolith dates back some 1200 years and stands 3.2 metres tall.

There are over 200 known symbol stones in Scotland and many more of them displaced or built into walls and dwellings. The Maiden Stone is probably the finest example of these. 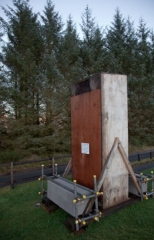 In the last 10 years or so the Maiden Stone has been boxed up during the winter months. It’s not a pretty sight. An upright coffin like box greets the visitor with a sign which reads:

“This temporary shelter will be in place until the spring. It has been fitted to protect the site from the combined effects of rain and frost over the winter months.”

Inside the box is The Maiden Stone, one of the finest Pictish monuments in the north east of Scotland.

Or is it all an illusion?

In 1840 Rowland Hill suggested the idea of roadside pillar boxes for use in the UK mainland. Folk at that time seemingly took their letters to the post office for posting and the postal authorities were keen to grow the communication business using modern innovations. These were pre-internet days of course but the railways were about to revolutionise both transport of goods and mass communication.

Letter boxes were already being used in Europe of course. However there were no roadside letter boxes in the British Isles until about 1852, when the first pillar boxes were erected at St Hellier in Jersey at the recommendation of one Anthony Trollope (author of Barchester Towers and Framley Parsonage), who at the time was working as a Surveyors Clerk for the Post Office.

In 1853 the first pillar box on the UK mainland was erected at in Carlisle. A similar box from the same year still stands at Barnes Cross in Dorset and is seemingly the oldest pillar box still in use today on the mainland.

In Scotland there were protests when the first boxes made in the reign of Elizabeth II were produced. These bore the inscription “E II R” but there were objections because Queen Elizabeth is the first Queen of Scotland and of the United Kingdom to bear that name, Elizabeth I having been Queen of England only.

After several “EiiR” pillar boxes were blown up and vandalised by Scottish Nationalists protesting “No Unlimited Sovereignty for Westminster in Scotland” including one in the Scottish capital, the General Post Office (as it was at that time) had the remaining boxes North of the border replaced with ones which only bore the Crown of Scotland with no Royal cipher. 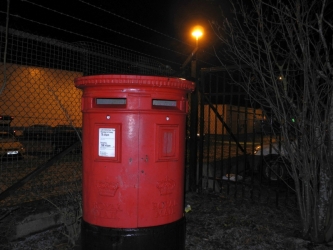 This is one such box and it sits proudly outside the main postal depot in Inverurie.

It is I think a Royal Mail (Type C) Pillar Box of 1950’s circa and is painted in that familiar Post Office Red paint unlike its Irish counterparts which are in Green or those strange metallic pillar boxes from the Greek Games of 2012.

I use it often but wonder who would want to spend their entire working day cooped up inside such a confined environment.

Bus shelters were once boringly functional affairs built by local councils. Some were iron-and-glass edifices covered in peeling municipal green paint. Others were made of brick and some in rural areas even had thatched roofs.

Then in 1969, two advertising billboard companies, “More O’Ferrall” and “London and Provincial”, joined together to form a company called Adshel.

The idea behind the new firm was simple.  Adshel would supply bus shelters to local authorities for nothing in return for the right to display advertising on them. In the early 1970s, it began installing its very first shelters in Leeds. 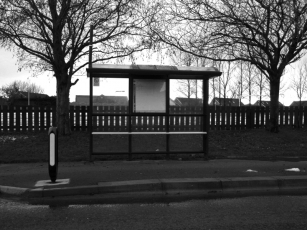 It’s a big market. But quite how big can be hard to find unless you dig into the National Public Transport Data Repository at http://data.gov.uk/dataset/nptg

There you can find out which place in Britain has the least bus stops – and which the most. Seemingly the Shetland Isles have the least at only 168 while Greater London has a massive 24,122!

I think that this inequality is a brilliant argument for Scottish Independence.