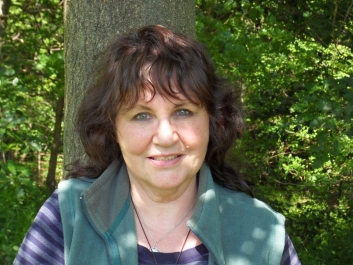 Yet I feel your novel is more comparable with Aberdeenshire author Lewis Grassic Gibbon’s Sunset Song.

Your Dying Embers and Shooting Stars is alternately forthright and lyrical, haunting and challenging, and beautifully written with a strong narrative voice.

You introduce us to a captivating, resilient and increasingly self-aware character, Margo, a Scots lass like Grassic Gibbon’s Chris Guthrie, whose life also reflects the social, political and spiritual background in her country. So, what inspired the title of your novel?

Maggi: I wanted to convey that sense of circularity and interconnectedness of all things…. ‘out of the ashes, the Phoenix rises’. The book cover also suggests that notion of ‘looking through/beyond’ and hopefully conveys the concepts of space and wonder which are so lacking in our modern lives.

“Margo” is pretty close to home, of course, and there is no doubt that the reader is invited into her head, but I’d like to think that the situations and circumstances that she experiences are recognisable as being fairly universal. Yes, a lot happened to young Margo, but she survived to tell the tale! I write from the perspective of believing that what matters is not so much what happens to you, as how you respond to it!

I’m very honoured that you should link me with the likes of Grassic Gibbon. All I’d really written before this novel were hundreds of Social Background Reports on other people. My role as an inner-city Social Worker gave me the Statutory Duty, but also great human privilege, to ‘do a nosy’ into people’s lives.

This was usually at times of great crisis and I was both fascinated and humbled by the current ‘human condition’ and how different folk dealt with the challenges that beset them. Many were broken by them of course, but some seemed able to tap into something deeper and I would then really enjoy the task of writing fulsome Court Reports that would ‘bring them alive’, or so said the Sheriff! But he still sent them down.

I didn’t set out to write a Book as such. Things happened that I felt the need to record and I would print them out on the work’s printer. Colleagues would pick them up while I was out on a home visit and I’d return to clamours of “more”! They would usually be falling off their seats laughing in the tea room. We really are a heartless lot.

Increasingly though, I was approached by individuals who were personally touched by the ‘story’ and I started to realise that it might have real therapeutic value. So I continued, while working full-time and also hosting a Global Exchange Group from India, and a “Book” was born in exactly five months. Sunday was the only day I could really put aside for it, so the lads cooked….or starved.

Nicola: It’s a real Scots novel, isn’t it, in setting and language, with a great emphasis on traditional Celtic hospitality, set in Glasgow and Edinburgh, and with a Peace March through Scotland via Aberdeen in the plot!

Maggi: There is nothing quite like walking the length of the country to get the measure of the land and its people. I’d like to think that the book reveals the roots of Margo’s sense of common humanity, by which she strives to live. I have no idea whether the images in my head have been conveyed via words on the page to the reader’s inner landscapes, but I’d like to think so.

I think it was the ten years that I spent in Africa that gave me a perspective on this wee country of ours that I might never otherwise have had. My children spent their early years in Zambia and the book gave me a chance to record those early influences that determined many of the values by which we live to this day.

As a Scot, I was often treated differently to my English husband, and I was amazed at the affection that was expressed for the Scots, who have a tradition of living alongside the indigenous people of Central Africa. 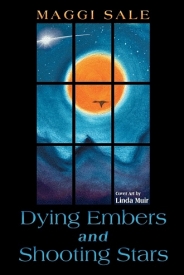 The book gave me an opportunity to express my gratitude for being part of the ‘ben-the-hoose’ hospitality that I experienced in my own Scottish childhood and in Central Africa.

There is a theme of water flowing throughout the book and that is no  accident.

When you have experienced water-deprivation while trying to breast-feed your child, you never take it for granted again.

I have been very privileged to have lived in many diverse places and contrasting social conditions throughout my life, so let’s just say that I didn’t have to ‘imagine’ much when writing Margo’s story.

Nicola: So, was it your intention to present the often harsh realities of inner city life from a woman‘s perspective? And in contrast, the most beautiful and enduring aspects of the human condition from a woman’s perspective?

Maggi: Perhaps that’s what came through for you, Nicola, but that was not my intention. The main character is incidentally a woman, but the main thrust of the story is the pain and distress that results from denial, really. That can, and does, happen to anyone who is brought up in a culture of, ‘we don’t talk about that’!

I saw this so much in my professional life too, and it nearly broke me.

Another theme of the book is the help and support that comes from very unlikely quarters, and Margo’s growing realisation of the source of this as she faces many dilemmas. Confidentiality would prevent me from revealing the actual people concerned so the characters are composite and the situations are scrambled; but they reveal a human resilience in the face of adversity that often left me humbled.

I think we have lost our way as a coherent society in recent decades and the book certainly reveals the dark underside of lost generations who are turning to drugs and crime in place of a lost identity. But I hope it reveals their humanity too.

Nicola: There’s a humorous element to the book, in spite of the often painful subject matter. How important is this?

Maggi: Absolutely crucial! I was totally shocked when I first came to live in Glasgow and couldn’t believe it when the toddler would answer the door and call, “Maw! It’s the f…ing Social worker!”…and the reply would come, “Aye! C’min Hen! The kettle’s oan!” Coming from Edinburgh, via Africa and rural Dumfries and Galloway, I didn’t know what to make of it at first.

My colleagues were equally earthy and soon knocked me off my ‘professional’ perch. And really, when you saw some of the truly horrendous social situations and circumstances that we had to deal with, you either laughed, or you cried. And I cried! After four years, I suffered a complete mental and emotional breakdown and felt quite suicidal.

We have to accept that the FOSSIL AGE is OVER….or WE are!

But as is often the case, it was that total collapse that brought me face to face with myself, and the pretensions that held my own pain at bay! It was that earthy, and honest, Glasgow humour that got me back to work. I really learned to laugh, and I haven’t stopped since.

Nicola: The book is published by Balboa Press, a division of Hay House, and you have very generously promised the proceeds from your book sales to causes close to your heart. Will you tell AV about these?

Maggi: As a grandmother of nine creative young people, all of whom are gifted musicians, artists, performers and students, I have a huge vested interest in securing their sustainable future. We are living in very troubled, but dynamic, times and my work over the years with VSO Global Exchange has convinced me that we do indeed have a future; but only if we radically change our ways as a species.

I established a small group based on non-violent direct action principles called HOPE, or the Human Order for Peace on Earth. Over the years it has challenged nuclear waste dumping and nuclear weapons, and is currently challenging fracking, which is the chemical extraction of gas from shale, which threatens our very existence.

We have to accept that the FOSSIL AGE is OVER….or WE are! The choice is now water, or oil and gas! Scotland has the expertise, ingenuity and opportunity to seek and develop sustainable alternatives, and we must!

I also teach English as a Second Language to asylum seekers and refugees, and provide refuge and respite in my village home and practical assistance when they are given ‘leave to stay’. I’m a’ body’s ‘Auntie’ and they call me Bumma! We work on the basis of ‘Living Simply, that Others may Simply Live’…. and we are a’ Jock Tamson’s Bairns undivided by creed or culture.

We now have a Council in Scotland and I’m the Granny of the Grannies, being the oldest at 70 in June! I have now used up all my savings doing this sacred work and any income from my book will allow me to continue.

Nicola: Thank you, Maggi Sale, for talking with us, and many congratulations on your book’s publication. Maybe it’s the first part of a trilogy, a Scots Quair for the 21st century ?

Maggi: As an honorary Glaswegian, my reply to that is, “Aye! Right!”

Grandmothers Circle the Earth Foundation is a non-profit organisation that brings together women of all ages and races, cultural, social, professional and spiritual backgrounds, to create practical and sustainable solutions to the most pressing issues they face today.

Its mission is to respond to requests for guidance, resources, professional expertise and administration in creating sustainable Grandmother Councils and culturally relevant Women’s Circles.

These bring together ceremonies, medicines and wisdom teachings of indigenous people from many nations, as valuable tools and bridges for addressing universal issues around the world, such as: Developing Community, Sustainability, Renewable Resources, Elder Care, Developing Youth Leadership, Domestic Violence, Business Development and more.