When Donald Trump began his tirade against Scotland’s renewable energy policy earlier this year, featured in Aberdeen Voice’s Tilting at Windmills article in April, he famously commented, ‘I don’t want to be standing on the first tee looking into an industrial wind turbine if I’m going to be spending all this money’ and ‘We will spend whatever monies are necessary to see to it that these huge and unsightly industrial wind turbines are never constructed.’ Perhaps he would be persuaded otherwise if he were to pay a even a fleeting visit to one of Banffshire’s hidden gems, the Glassaugh Windmill just east of Sandend on the Moray Firth coast, muses Duncan Harley. 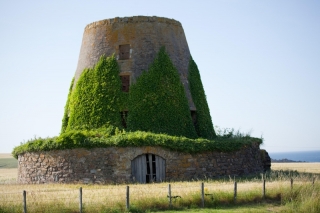 At first glance, the windmill can easily be mistaken for a Pictish Broch or even a Martello Tower.
Set back 500 metres from the A98 Portsoy to Cullen road, the structure has a covering of ivy which masks the outline and suggests a tower house with a walled garden circling the base. Nothing could be further from the truth, however.

In common with much of the Banff and Buchan coastline, the area around Sandend is full of Pictish remains. These are often built over, or indeed incorporated in later structures such as farm houses, churches and dykes. The Glassaugh Windmill is just such a building.

General James Abercrombie of Glassaugh was, as his title suggests, a military man. He was born in 1706 to a wealthy Banffshire family and, as was the custom of the time, in 1742 he purchased a major’s commission to enter the army. He was promoted to colonel in 1746 and major-general in 1756.

He is credited with having good organisational skills but little understanding of the art of warfare and was known to his troops as Mrs Nanny Abercrombie because of his skills at provisioning and providing creature comforts like tents and hot food on the long marches through North America during the French and Indian War of 1689-1763.

Unfortunately, in the July of 1758 he had his own Charge of the Light Brigade moment when he rather rashly directed his troops into a frontal assault on a fortified French position without the benefit of artillery support.

More than 2000 of his force of 15000 were killed or wounded, resulting in the good general being recalled to Britain where he duly became a Member of Parliament, supporting the cause of British dominion over the Northern Territories of America and Canada. No surprises so far then.

When Major General Abercrombie MP returned to his native Scotland, he took over the running of the family estate at Glassaugh and, possibly lacking much to do in the parliament of the day, he began organising the improvement of the agricultural economy of the area.

This was a time of land improvement and land enclosure. Labour was plentiful and indeed cheap, as a large number of Irish Catholics had been uprooted by the influx of English and Scottish aristocracy and had in many cases sought work on the land in Scotland. What was Major General Abercrombie MP to do? 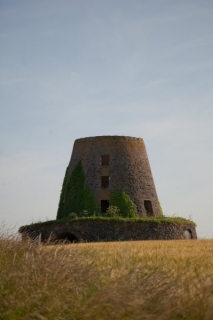 He had indeed been a poor general but possessed good organisational skills. In the true spirit of Jaroslav Hašek’s Good Soldier Švejk, which is essentially a series of absurdly comic episodes, Abercrombie decided to build a windmill.

In those far off days, most mills were powered by water. There are tens of thousands of watermills in the UK and at a guess there must be at least one in every inhabited town and village in Aberdeenshire. Transport was improving during the 1750s, but local flour and grain mills were still the order of the day and met the needs of the townships and small communities all around the shire.

Windmills were not unknown in the NE, but were not that common due to the ease and availability of waterpower. Abercrombie however, decided that wind was the way to go.

As any engineer will know, the biggest challenge in building large structures is the sourcing of building materials. If you need to build a wall then you will require large quantities of stone, heavy and difficult to transport. The shorter the journey from quarry to building site the better.

Well, it just so happened that Major General Abercrombie had a ready-made supply of building materials in the form of a bronze age burial cairn. The folk who had built the cairn would have no objections to its recycling after all, and of course Scottish Natural Heritage was not even a slight smile in the womb of the Natural Heritage (Scotland) Act 1991.

The Cup and Saucer was born. Using the materials from the ancient cairn, Abercrombie bade his workers build an enormous windmill four storeys high and with a tapering tower topped with white sails. It must have been the sight of the century for folk who had never travelled further than Sandend or Portsoy.

How long Abercrombie’s windmill was in full tilt is not recorded, but in a letter dated 23 August 1761, he advised his daughter that high winds had almost blown off ‘the pompon of the wind mill which was only set up yesterday’.

The ivy- covered stump of the structure is all that remains today to remind us of the man who had the vision to build it.

Although, when you think about it, you’re actually looking at a Bronze Age burial cairn undergoing a Tibetan sky burial.