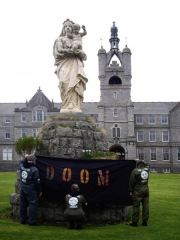 By Dave Innes and Ross Cunningham.

What on (or below) earth are The Gothic Dorics, – a name evocative of a hellish hybrid ancient monochrome architectural structure lost in a bewildered modern world – and furthermore, what is their version of reality?

They have already staked their claim as the NE’s – and the world’s – first Doom-Tekno outfit. Three Aberdeen souls who have triumphed, despite the handicap of being too slothful to get things together, in creating an album due for release – or perhaps that should be escape – on Saturday 24 July when they debut at the city’s Moorings Bar. Aberdeen Voice discussed with the band its somewhat ‘interesting’ approach to lyrics and music.

They certainly aren’t what could be described as easy listening.

”Easy listening?” growled lead singer Foxbits with menacing indignance, ”Easy listening? Listen min, easy listening is to aural stimulation what the British diet is to the palate. It’s bland. It’s uninspiring. We’re definitely not that. To continue the food metaphor, I’d describe our music as, let me see…a curried pizza kebab, aye, that’s it, er….only eaten by errm…a rabbit. You know what rabbits do to get full nutritional goodness from their food, right? Well we’re that secondary helping…mmmm. The partially-digested tasty food that maybe doesn’t taste quite as good anymore but it’s certainly not bland. Or easy.”

Fellow Dorics Woolly and Ivo Von Engine, are equally forthright. ”We aim to make people happy,” backing singer Woolly mused. ”We achieve that by singing about what people don’t always want to hear. Take Keeky Breeks for instance. You can’t help but feel better about yourself when you hear the horrendous misfortune suffered by the song’s subjects – and it’s all true. In fact, we had so much material for Keeky Breeks, we had to throw away three verses, not including Foxbit’s double disaster. We keep our subject matter real, relevant, humorous and just plain wrong, which is a recipe for disaster and what Doom-Tekno is all about. After all, we invented it, so we get first shottie at describing it. Want to argue, like?”

Ivo Von Engine interrupts to explain Granny Trucker. ”Of course, that’s not the song’s real name, but ‘trucker’ is good enough for now. I was thinking of songs to cover at our world premiere Moorings gig and ‘You Canna Shove Your Granny Aff A Bus’ came to mind, Why not? Why can’t you chuck your granny off the 21 to Cove or the overnight Megabus to Birmingham? ‘She’s your mammy’s mammy’ is such a lame reason, isn’t it? So I’ve made up my mind – she’s getting kicked off the bus and that’s it. Live with it, grandma!”

By now, Voice was feeling uneasy and decided on a quick wrap, but not before enquiring as to what might be expected from a Dorics’ live show.

”Giant inflatable spiders; racing grannies; (here there ensued an argument between Ivo and Foxbits who thought Ivo had called the singer’s granny a racist) old-school guising; a maggot-eating competition; impromptu kitten-huffing demos; ludicrous dance-offs and if there’s time, maybe some bangin’ heavy Doom-Tekno beats. Think Combichrist meets Rammstein at a Prodigy post-gig rave with a sprinkling of Des O’Connor fairy dust. We sound nothing like that, of course, but it’s definitely food for thought for the next album.”

In the best tradition of undercover investigative hacks, Voice made its excuses and left. Via the window – it was quickest.

Intrigued by The Gothic Dorics? Visit their Facebook page. They’re live at The Moorings Bar, Trinity Quay on Saturday 24 July. £3 entry. If you dare.